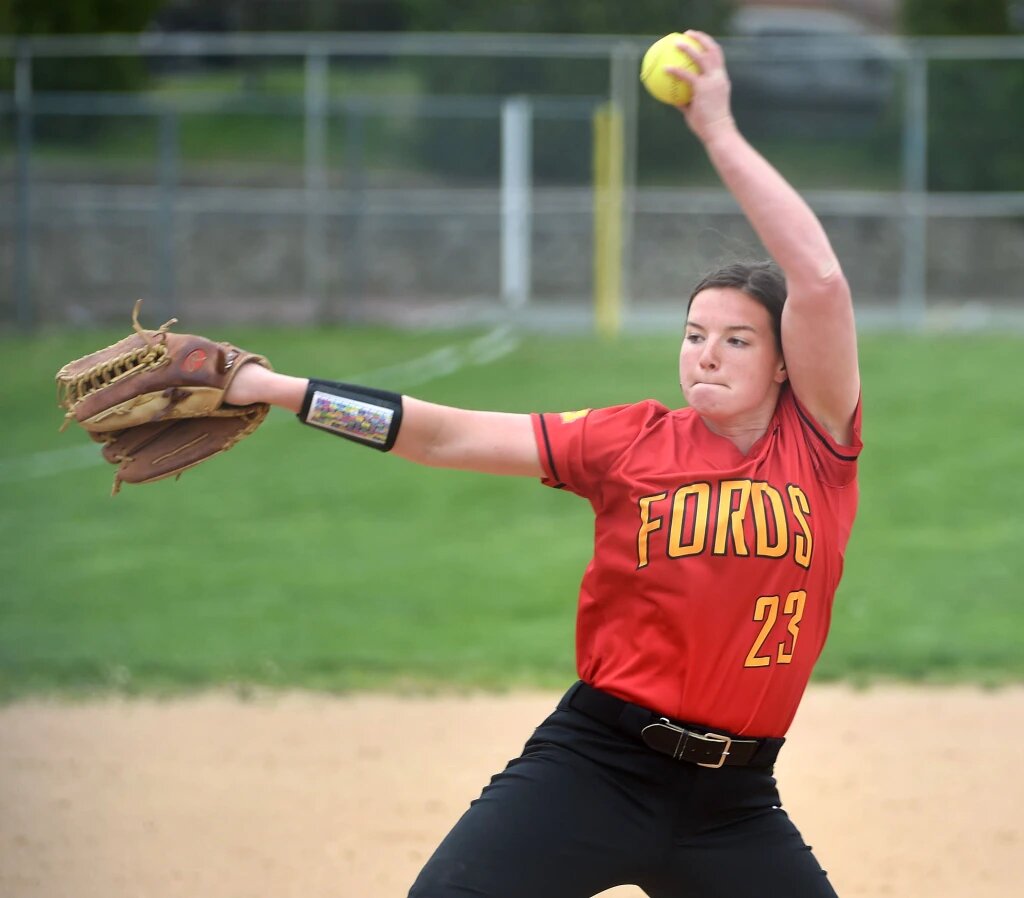 First, she broke the school’s all-time strikeout record of 387. Taylor fanned the first hitter she faced.

Next on the to-do list was getting 400 strikeouts, a remarkable achievement when you consider that Taylor was denied her sophomore season in 2020 due to the coronavirus pandemic.

Thirdly, Taylor began the day one win shy of 42, also a school record. The undefeated Fords roasted Penncrest, 16-2, and Taylor notched a strikeout for the final out of the game for career punchout No. 400 and locked down the wins record.

The strikeout and wins records were previously held by All-Delco Bridget Newman, who presented Taylor with a ball to commemorate the special occasion.

Taylor was curious as to why assistant coach Jill Marshall had been looking for a clean ball on which to write “All Time Win Record.”

“I didn’t know. I looked over to Ms. Marshall and I saw she was dumping the balls out of the bucket, wondering what she was doing looking through them and I had no idea what was happening,” Taylor said.

Haverford High pitcher Emma Taylor is congratulated by teammates after setting the school record for career strikeouts and wins in a 16-2 triumph over Penncrest (Pete Bannan/MediaNews Group).

While she will cherish the moment, Taylor is grateful to share another win with her teammates. And the Fords have done plenty of winning this season. Last year’s PIAA Class 6A runners-up, the Fords are off to a scorching 11-0 start.

The stats and achievements are nice, but the Yale-bound Taylor has one priority: winning.

“When I’m pitching I feel like it’s more of a feeling and then obviously just the team atmosphere as a whole is really important,” said Taylor, who is the reigning Daily Times Player of the Year.

Haverford coach Bob Newman joked with Taylor before the season that he didn’t want her to break his daughter Bridget’s records.

“I told her ‘Hey, you’re 10 wins away. When you get to nine, you’re going into centerfield,’” Newman said. “There’s no one better who could’ve broken it. She’s an unbelievable person. She was voted captain as a sophomore, so she’s a three-year captain. And to do this without having a season (in 2020). Starting in November, she’s running our workouts, I didn’t even have to go because she had it all under control. … She’s just an unbelievable kid and leader.”

Taylor mashed a home run in the first inning to give the Fords a 4-0 advantage. From the circle she allowed three hits and one earned run. Riley Signor had the only decent contact when she slugged a solo homer that split the gap in right-center field.

The Fords collected 17 hits. First baseman and cleanup hitter Annabelle Knese led the charge going 3-for-4 with a double and two RBIs. Maddie Culbertson belted a three-run dinger in the fifth inning and finished 2-for-4 with five RBIs. All-Delco Kerri McCallum (three runs) and Grace Ciochetto (two RBIs) both went 3-for-3 for the Fords.

Despite graduating 10 seniors last year, Haverford is off to a tremendous start and sits all alone in first place in the Central League.

“It’s a little bit different this year and it took a couple games at the beginning of the season to really work together as a team,” Taylor said. “But I think we’re there now. The main difference is our offense. We’re hitting differently this year, there’s a lot more singles and we’re just finding different ways to get runs on the board than last year when we had more speed.”

Springfield 5, Upper Darby 0 >> Amaya Hartung twirled a two-hit shutout with six punchouts and helped herself at the plate with a single and double. Ally Heston went 2-for-3 with a triple and Hope Priemon smacked a double for the Cougars.

Strath Haven 24, Lower Merion 8 >> The Panthers plated nine runs in the bottom of the first and ended the game with a 12-run fourth. Cate Kozub was 3-for-3 with a double, five RBIs, three runs scored and two walks.

Ridley 15, Radnor 0 >> The Green Raiders pounded out 18 hits on the way to a blowout of the Raptors. Karlie Cecchini and Gemma Taggart combined to let up only one hit while striking out five.

Jolie Torrens paced the Ridley offense, going 3-for-3 with a triple and three RBIs. All-Delco Haley McMenamin was 2-for-3 with a homer and five ribbies. Maddie Gordon and Dakota Marshall each went 2-for-2 with a two-base knock.

Cardinal O’Hara 6, Little Flower 3 >> Winning pitcher Hayden Sissons registered 10 strikeouts and helped her cause with two doubles for the Lions. Caitlin Jordan smacked two triples and Brigid MacGillivray finished 2-for-3 with a double.

Episcopal Academy 6, Germantown Academy 0 >> Freshman Maddie Maisko struck out 10 from the circle in a complete-game shutout. At the dish she finished 2-for-4 with a double and an RBI for the Churchwomen.

Interboro 10, Penn Wood 0 >> Dani Linker pitched a two-hit shutout with 15 strikeouts and clubbed a solo homer for the Bucs (6-2, 4-0). Erin O’Shea had two hits and two RBIs, while Summer Burrell was 2-for-2 with an RBI.

Unionville 6, Sun Valley 4 >> Jordyn Skarren supplied four hits and Brianna Lawson had two base knocks and three RBIs, but the Vanguards fell to the Longhorns in nine innings.  Sarah Powers, Layla Murphy, Lacie Gilpin, and Devin Warner all chipped in with two hits for SV.