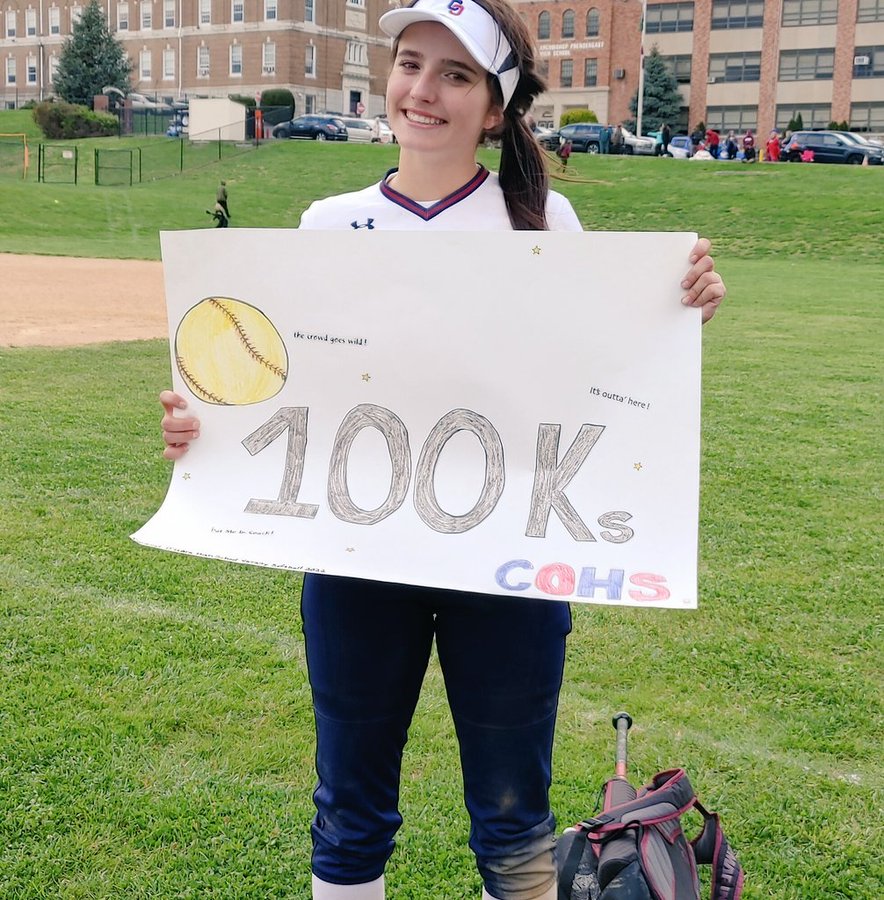 UPPER DARBY — Cardinal O’Hara freshman Hayden Sissons was mowing down hitter after hitter Wednesday at Bonner-Prendergast. Eventually, she needed her bat to win the game.

Victimized a bit by a porous defense, the freshman maintained her composure and kept the Lions in the game long enough to make a late rally. In the eighth inning, Sissons stood at the plate with the chance to give O’Hara its first lead. She didn’t disappoint.

“It was nerve-racking, but I had confidence in myself and my team that we were going to do it,” Sissons said.

With runners on first and second, and one out, Sissons hit a towering drive the opposite way to right field. The ball got caught in a wind shear and traveled out of the reach of the right fielder. Sissons knocked in the go-ahead runs and scampered to third base with a two-run triple.

She then turned around and worked out of danger in the bottom of the eighth inning as O’Hara completed an impressive 9-6 victory over Bonner-Prendie in come-from-behind fashion.

After the game, Sissons took pictures with her teammates, who had made her a sign celebrating 100 career strikeouts. She hit the milestone Monday against Little Flower.

Not bad for a freshman who has played all of 10 high school games.

“She’s a coachable kid … and she’s all about the team,” said first-year O’Hara coach Terry Coyne, who came out of retirement to coach his alma matter. Coyne previously served as head coach at Episcopal Academy. “She’s a rare find and she’s going to be really, really good for us. She’s a strikeout pitcher and she can hit the ball very well.”

When the Lions committed five errors in a third inning that resulted in three unearned runs for the Pandas, Sissons could have easily crumbled. Instead she kept coming at the Pandas, who struck out 14 times. Talia Carr smoked a triple to set up an RBI knock by Kelly Martin, and Lex Horton was 3-for-4 with a triple and two RBIs, but overall Sissons was excellent.

“What you really have to do is keep your confidence up and have trust in your teammates behind you,” Sissons said.

Carr (seven Ks) was just as good from the circle for the Pandas and cruising along by the seventh inning. She had retired eight in a row before she issued back-to-back walks to Anna Smith and Avery Groh with one out. Sissons smacked a single up the middle, driving home Smith, to cut O’Hara’s deficit to 5-3. After Carr retired Maeve Boston on a pop fly to center, catcher and clean-up hitter Caitlin Jordan was O’Hara’s last hope. Jordan hit a seemingly harmless grounder to shortstop, but a poor throw to first baseman Bridie McCann allowed the Lions to plate two runners and even the score at 5-5.

Sissons worked around a two-out single by Grace Edward in the bottom of the seventh. In the eighth, Maria Lee got things rolling with a leadoff walk and Groh reached base with a one-out single, setting the stage for Sissons’ heroics. Boston drove in Sissons to give O’Hara an insurance run.

A young team still figuring things out on the diamond, the Lions improved to 7-3 overall and 3-3 in the Catholic League.

“We are coming together,” Sissons said, “on and off the field.”

Marple Newtown 11, Upper Darby 1 >> Kelsey Racine had it going on for the Tigers. The senior pitcher racked up 11 strikeouts and allowed only three hits in a six-inning complete game. At the plate, Racine was 3-for-4 with a home run and five RBIs.

Lindsay Walsh was 1-for-2 with an RBI and two runs scored. Shauna Kerrigan scored two runs and swiped a pair of bases.

Nora Zakrewski was 2-for-3 with an RBI for the Royals.

Ridley 11, Harriton 0 >> Jolie Torrens was 3-for-3 with two doubles and four RBIs to power the Green Raiders to a rout of the Rams. Faith Zaenitch was 3-for-3 with two ribbies, while Dakota Marshall smashed the walk-off three-run homer in the fifth inning. Karlie Checchin pitched a two-hit shutout with five punchouts.

Garnet Valley 11, Penncrest 0 >> Anna Sidlowski tossed a no-hitter with 13 strikeouts to lead the Jaguars over the Lions. Elisabeth O’Connor, Hannah Long, and Emily Orsini all had big days at the dish.

Episcopal Academy 20, Penn Charter 0 >> Maddie Masiko fanned 10 of the 15 hitters she faced as the Churchwomen disposed of the Quakers in five innings.

Hanna Mae Legaspi went 4-for-5 with two doubles and two RBIs to lead Episcopal’s 19-hit attack. Anna Gallagher (two RBIs) and Rylie Spor each contributed three hits. Masiko was 2-for-3 with a double and Nyah Legette had two singles and four RBIs for the Churchwomen.

In the Ches-Mont League

Bishop Shanahan 13, Sun Valley 8 >> Ally Sheppard collected four hits, including two doubles, for the Vanguards. Brianna Lawson and Malena Timmes each homered, while Layla Murphy and Devin Warner both finished with three hits in the loss.

Interboro 15, Academy Park 0 >> Jules Bergen pitched a three-inning complete game with six strikeouts in the Bucs’ trouncing of the Knights Tuesday. Bergen helped her cause with three hits and an RBI.

Dani Linker smashed her second homer in as many games and finished 3-for-3. Sarah Smith went 3-for-3 with two triples and three RBIs, while Erin O’Shea chipped in with two doubles and two runs scored for Interboro (7-5, 5-0).