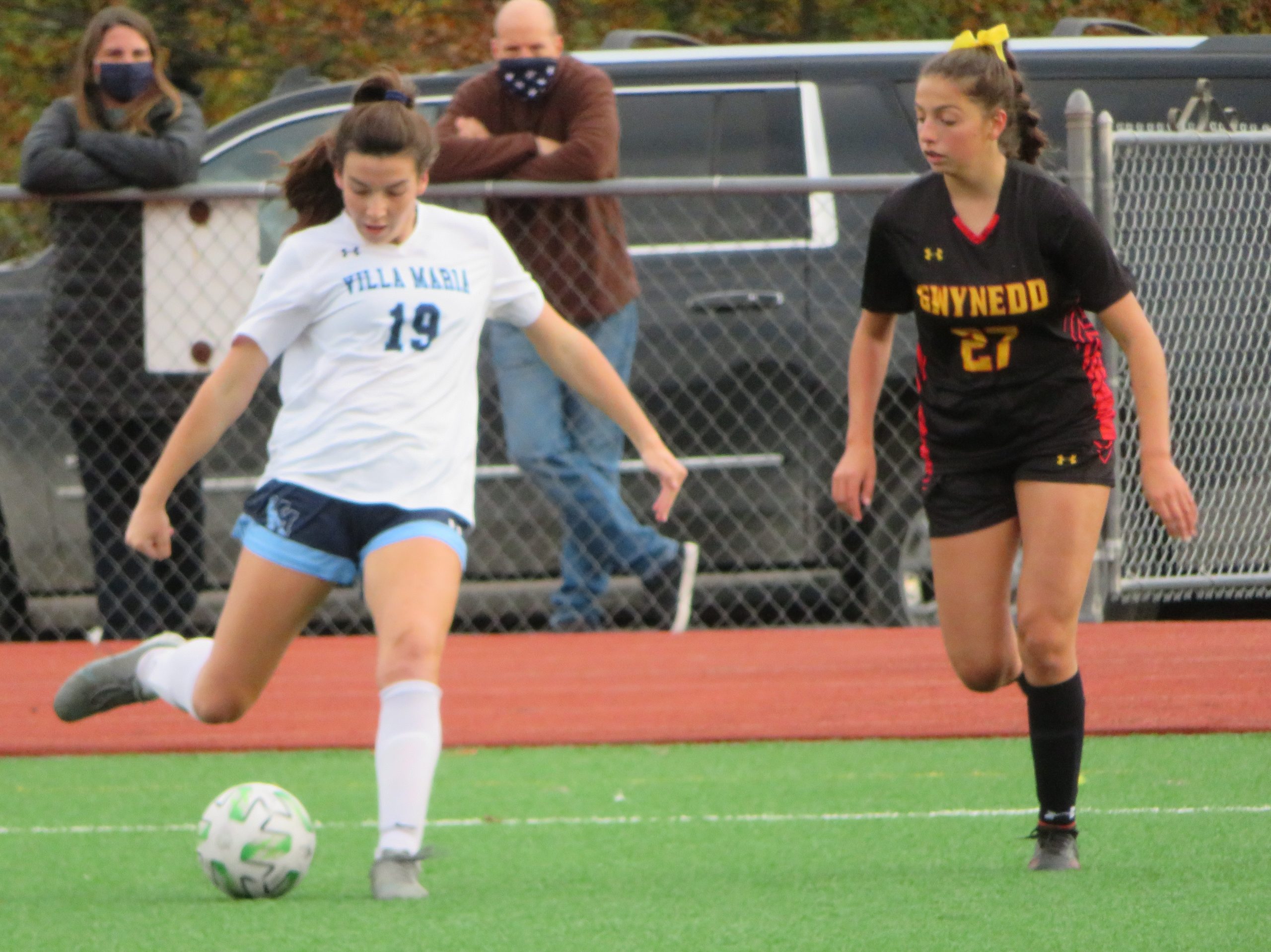 LOWER GWYNEDD >> Bella Carlucci looked at the clock and couldn’t help but remember.

As the second half wound to its final 15 minutes, the Villa Maria Academy senior striker recalled what had happened the last time her team had faced Gwynedd Mercy Academy. In that game late last week, the Monarchs scored three unanswered goals in the final 15 minute to stun the Hurricanes on their home field.

So while Carlucci remembered the last time, she and her teammates kept it from repeating as they topped the Monarchs 3-0 on Tuesday.

“I think we were all thinking a little bit about what they could do just like the last game,” Carlucci said. “Our momentum and our pace helped us to keep up and not let them come back.”

Last week, the Hurricanes built a 3-1 lead but saw it all blown away in about 15 minutes as Gwynedd Mercy stormed back to win 4-3 in their AACA matchup. Tuesday, with both teams battling for position in the District 1-3A playoff field, VMA knew it had a chance to make up for that outcome.

The Hurricanes (6-2) started seven sophomores and a freshman in their XI on Tuesday but they played like anything but underclassmen. Villa Maria, which entered as the No. 5 team in 3A, hit the turf running and didn’t give the Monarchs much time to string passes together.

It paid off with an early goal as well when freshman Carly Catania was able to carry the ball down the right flank, beat a defender at the corner and served a cross that sophomore Kaelyn Wolfe struck into the back of the net.

“We’ve always been taught to build from the middle in attack and shut the middle down defensively,” Carlucci said. “Our midfield did great sending the ball wide and up top and it just kept our momentum going to goal throughout the game.”

The Hurricanes’ defense, which had four sophomores on the back line and a sophomore goalkeeper in Maddie Catania, also wanted to prove it was better than its last showing against GMA, which sat at No. 2 in 3A pregame. Center back Kate Martin showed the effort they were bringing in the first half, when she recovered and stepped in for a clutch tackle against Monarchs’ forward Sam Berish to give up a corner but deny an open shot.

“We were more connected,” Martin said of the backs. “We tried a new sweeper and stopper system that worked really well.”

Gwynedd Mercy (6-2) saw its six-match win streak snapped and with a match against District 1 and PIAA 3A power Villa Joseph Marie on Wednesday, ends a grueling stretch with a tough ask. The Monarchs, who played four matches last week and four on tap this week as they moved up some dates to reach district eligibility, couldn’t muster the same miracle finish as the first meeting.

It wasn’t for a lack of trying, but anytime Berish or forward Kaylie Griffin got the ball, they were met almost immediately by a defender with more Hurricanes coming in to help.

“If you look at the stats, it’ll be pretty even but they capitalized in the first 10 minutes and we never found our way to the goal,” Monarchs coach Bill Dailey said. “I think it was tighter than the scoreline showed, we had a lot of girls really hustling and battling but at the end of the day, they deserved it.”

Carlucci would double her team’s lead with about seven minutes in. The speedster senior latched on to a long pass then, belaying her small stature, powered through several Gwynedd Mercy defenders before slotting a tight finish to the far post.

At the half, the Hurricanes switched from a 4-4-2 formation to a 4-5-1 to put an extra player in the midfield but also giving Carlucci and Catania the ability to trade shifts running at the Gwynedd defense. Wanting nothing more than to make the lead stand up, Carlucci was eager to run all-out when she was on the field.

“Being the first player to get to the ball was helping us all game,” Carlucci said. “We have the speed up top to still be a factor, but also keeping the shutout was important. Because they came back from 3-1 to win 4-3 last time, it kept us from lowering our game and our level of consistency even higher.”

Wolfe, who created several good chances at her right wing spot, gave Villa Maria a 3-0 lead early in the second half. Senior Maddy George’s corner found the dynamic sophomore at the near post, with Wolfe glancing a head just inside the woodwork.

Maddie Catania made a big save on Berish with 27:19 left, keeping her team up three but at a cost. The sophomore had to leave the game injured and Alyssa Kinmartin, who had been a field player off the bench, took over in goal the rest of the way.

The defenders were able to rally around Kinmartin, who made two saves, and kept pushing for their ambition of a clean sheet.

“We wanted to keep the shutout and not let any goals in,” Martin said. “We knew we were playing strong. We could feel the momentum more in this game and really feel we were playing well so it kept our confidence up.”

Villa with another goal line stop on Gwynedd corner pic.twitter.com/JobprbQGPN

With the exhausting stretch of games leading to Wednesday’s district result cutoff date, Dailey noted his team is starting to feel the effects with some heavy legs. Still, the Monarchs did rip off six straight wins and they hung with VJM the first time around, so they’re looking to grind through this slate and eye up the postseason.

“It’s tough to play this many games in this timeline and keep the players healthy,” Dailey said. “We’ve been doing really well, we had been scoring a lot prior to today. Everything is a little out of whack, so it’s harder to judge but we had a good run and couldn’t get this one so it’s something to learn from.”