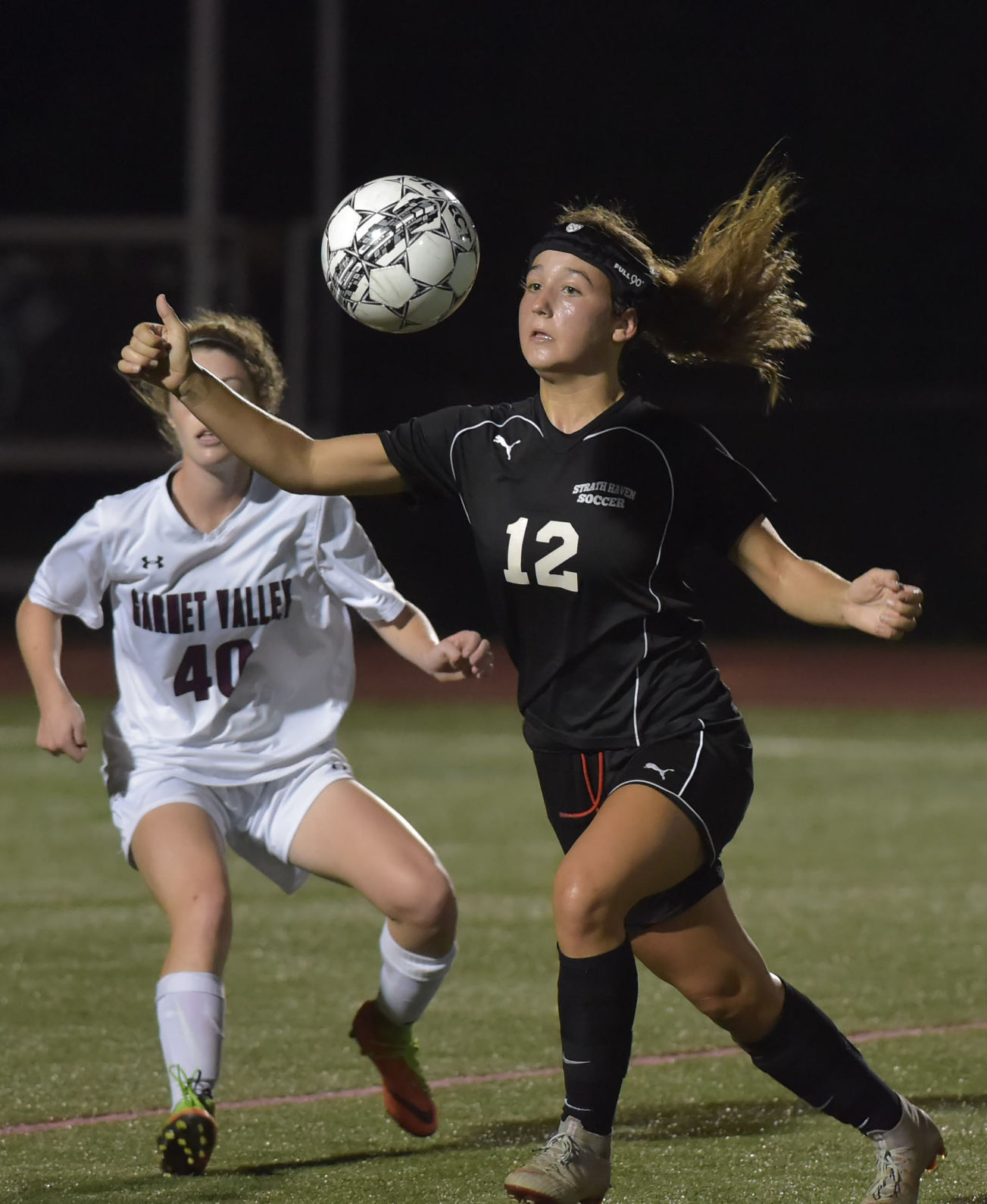 NETHER PROVIDENCE — As Maggie Forbes checked on goalkeeper Laura Shea in overtime Wednesday, she had to stifle a laugh. Not that there was much funny about the freshman rolling her ankle, or that Forbes was playing on a sprained ankle, or that backup goalie Andie Galante was sitting on the bench icing her leg after a second-half knock.

It’s just the way things have gone for Strath Haven, and Forbes could see the humor in it.

“It’s literally comical,” Forbes said, after Shea hopped around to cover the last few minutes of a 3-3 draw with Haverford. “Last year, we didn’t have too many seniors. We thought we’d be the same team back. And a couple of practices in, a couple of injuries, and we’re a completely different team than last year. We have five freshmen starting who weren’t there last year. It’s crazy.”

Shea is one, preserving the win with an outstanding one-handed save of a Rachel Yocom shot that appeared ticketed for the bottom corner two minutes into the second extra session. So is Alex Zweier, who scored the equalizing goal with 2:06 left in regulation.

As if a season altered by the COVID-19 pandemic wasn’t enough, the Panthers have endured a rash of injuries. Starting with a torn ACL last spring for Julia Steere, who scored in the Panthers’ states game last fall as a freshman, to a second major knee injury to All-Delco defender Dahlia Kuzemka in preseason, it’s been an ordeal. Injuries kept senior backline anchor Grace Samaha and forward Gianna Zweier out Tuesday. Sophomore midfielder Lily Ostiguy spent most of the second half out with a leg issue. So the Panthers fielded as many as six seniors at a time.

The alternative, however, to playing hurt is much worse to Forbes.

“I’m just lucky we’re having a season,” the senior and reigning Daily Times Girls Soccer Player of the Year said. “We’ve played six games in 10 days. It’s pretty insane. We have a good amount of injuries on the team, but anything to be back out on the field. We could be not having a season right now.”

The teams got plenty of action out of Tuesday’s affair. Forbes, ever the demon on set pieces, headed a ball out of the hands of goalie Madison Kantawala from a long throw by Danielle McNeely seven minutes in. But Haverford evened it up three minutes before half, Jessica Miller finding a loose ball and looping it over Shea.

Miller made a more sensational contribution seven minutes into the second half. On a free kick from 25 yards on the left wing, she shaped a beautiful hit over the wall and deftly into the far corner, leaving Galante no chance.

“I’m just trying to get it on frame, so if there’s any way for a rebound, and make sure that I don’t look at the wall in front of me so they don’t psych me out,” Miller said. “I try to focus on where I want to put it and try to put it there.”

Pristine placement from Jessica Miller on the free kick. Her second puts Haverford up 2-1 pic.twitter.com/GlnRNqu0c4

The Fords ceded possession most of the way, then finally connected on key passes in a 57th-minute counter, Mollyanne Brophy streaming down the right touchline before centering to Mackenzie Lacey to tuck home a goal and make it 3-1.

But Strath Haven had an answer. Senior Ellie Malek, who started as a defensive stopper then moved into midfield, took a turn at forward. Her free kick was paddled aside by a diving Kantawala (four saves) in the 67th, but a minute later, Malek finished off a shot near the top of the box off a Forbes layoff.

Another McNeely throw triggered chaos in the box, one of the few times that Haverford center backs Alyssa Seavey and All-Delco Brooke Snopkowski were anything but perfect in clearing their lines. The ball found Zweier near the top of the box, and the freshman put her foot through the ball.

“It was a really well-played ball and it was a really big scramble,” Zweier said. “The ball kind of rolled through another player and my first reaction was, I need to touch this. And I just hit it as hard as I could with my left foot. And when I saw (Kantawala) dive and it went in the corner, I was like, that did not just happen. I was so surprised. It was great.”

In such an unprecedented season, both teams can determine what constitutes success. Strath Haven added three games against Conestoga, losing the first two before a win Monday night, to meet the minimum number of contests to be eligible for the postseason, if they elect to play then. If they don’t, it’s just more chances to play together.

“We progressed as a team really well,” Forbes said. “From the first game to the last game, we became a really good unit. We figured out how to play with the new freshmen, to figure out how to pass, how to play possession, and the team just grew all together from those games.”

For Miller, a draw at Strath Haven fits the bill, especially for how she’s seen her team improve this year.

“We are definitely a step up from our first game together and everything has been increasing,” the senior captain said. “And for the rest of the season, I think we’re going to keep on getting better with communication and passing and getting up the field and things like that.”

Lower Merion 2, Springfield 0 >> Emily Boyer made 10 saves in goal, but markers by Maya Masotti and Kate Jackson paced the Aces.