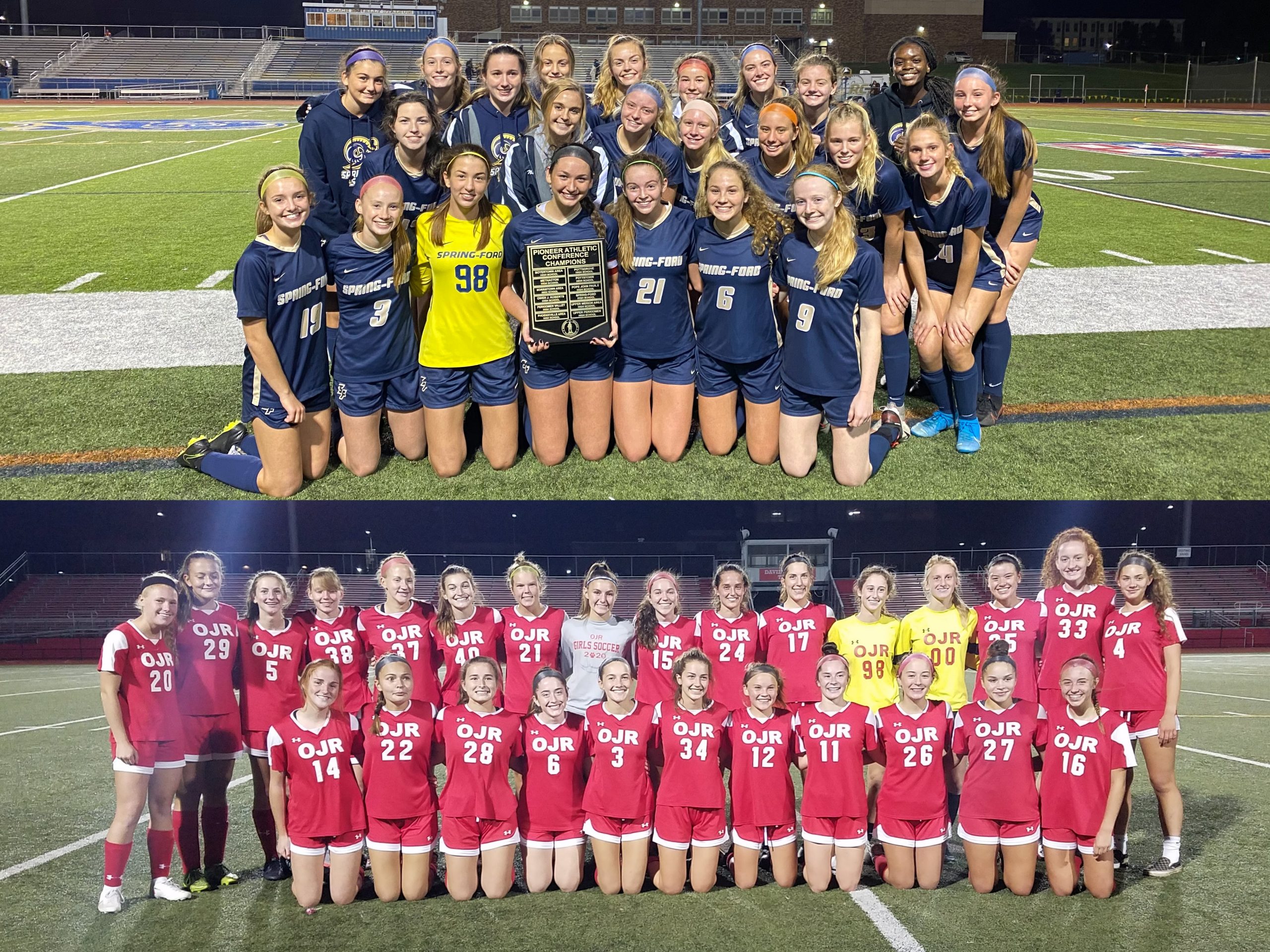 The Owen J. Roberts and Spring-Ford girls soccer teams were on the lookout for each other all fall.

In the standings, on the field, there was little margin between the Wildcats and Rams.

Now, they’ll be inseparable for all time.

The Wildcats downed Upper Perkiomen 2-0 at home behind goals from Olivia Thompson and Alexa Vogelman while Spring-Ford struck for five in a 5-2 win over Pottsgrove behind three goals from Hope Flanegin and single tallies from Claire Lanzisera and Emily Higgins.

OJR and Spring-Ford split their head-to-head meetings – OJR winning 2-1 on Oct. 5; S-F taking a 3-2 overtime win on Oct. 17 – and each played to a 1-1 draw with Methacton, the only other blemish on their PAC marks.

It is the third PAC championship in four years and 13th overall for Owen J. Roberts while it’s the first for any current Rams, who have won three previous PAC titles (2013, 2014, 2016).

“It’s surreal. We didn’t even know if we would have a season in general so to be here and win, it’s awesome,” said OJR senior defender Emily Sands.

Senior Spring-Ford players hadn’t experienced the PAC championship feeling so it was more than welcome to return the program to the league’s perch.

The Owen J. Roberts girls soccer clinched a share of the PAC championship with a win over Upper Perkiomen. (Austin Hertzog – MediaNews Group)

Spring-Ford poses with the PAC championship placque after clinching a share of the league title with Owen J. Roberts.

The Wildcats got their breakthrough in the 21st minute when Kopec hit a corner kick that ran along the end line and wasn’t cleared from the near post, running untouched across the goal mouth with sophomore Thompson being credited with a tip in.

“I thought I was going to get yelled at for mishitting the ball. I was waiting for it. And then everybody cheered and I was like, ‘Oh, it went in!’ Kind of not sure what happened but it worked out,” Kopec said.

OJR carried a greater threat throughout – it led in shots on goal 10-5 – but did not at all overmatch a very promising Upper Perk squad (5-7) that got leading performances from Sara Edwards, Sarah Fisher, Kyra Lesko and Lauren Powers. The OJR back four of Sands, Mo Weaver, Rachel Sbei and McKayla Farrow, holding midfielder Gabby Koury and goalkeeper Sam Hughes (5 saves) never allowed the Tribe major traction.

Moments after being denied a legitimate penalty shout, sophomore forward Vogelman put the game away with a touch on class, dribbling to within a yard of the right post, taking a touch to her left amid pressure from UP keeper Gabby Neal (8 saves) and scoring on the backheel.

Simultaneously in Royersford, Pottsgrove (1-11) jumped out to an early lead but couldn’t hold off the PAC’s highest-scoring team (33 goals). Falcon goals were scored by Hailey Strain and Avery Makoid.

Though there were a lot of smiling soccer players Tuesday, some couldn’t help but wonder what a rubber match would have looked like.

“Instead of just having a win here, we would probably be playing Spring-Ford at this point (in a normal year). So it’s almost disappointing,” said Sands. “We still won, which is really exciting. But it would have been really hype to be playing against Spring-Ford for the PAC championship.”

Both sides have aspirations for more trophies this fall.

“I’m feeling like we accomplished one of our goals for the season. Winning a PAC championship was one of our three goals,” S-F’s Higgins said. “It’s definitely satisfying, but I think we have bigger goals than what we achieved tonight. We still having six games ahead of us that we want to win and that’s our biggest goal.”

In the COVID-19 pandemic altered fall season, it will take six wins to claim the District 1 and PIAA championships.

As it turns out, Owen J. Roberts and Spring-Ford are even inseparable in the District 1 power rankings. With identical records and results against every opponent, they are tied in all ways and ranked tied for 4th.