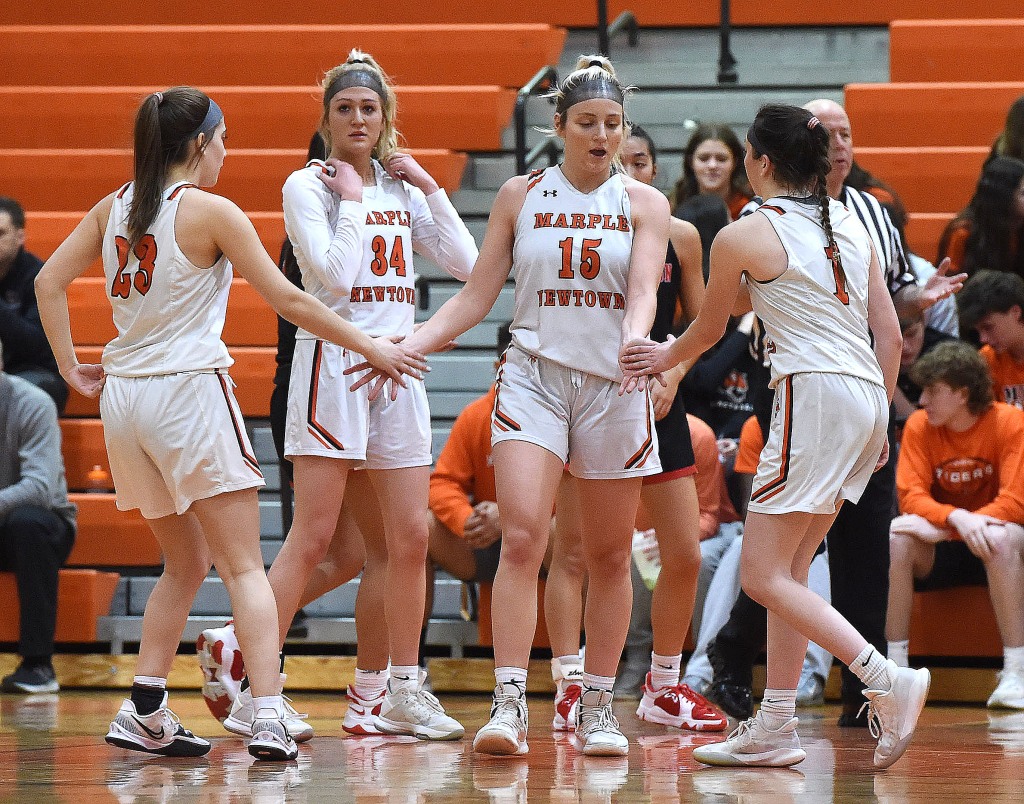 Marple Newtown's Haley Levy (15) gets a hand from teammates Nikki Mostardi (23) and Mary O'Brien, right, after drawing a foul in the second quarter Tuesday against Harriton. (Pete Bannan/MediaNews Group)

MARPLE — After Haley Levy underwent back surgery a year ago, her basketball coach was one of the first people she saw when she returned home.

Ryan Wolski was ready to help with anything the Marple Newtown senior needed. It was remembering Wolski’s show of kindness that had Levy in tears after the Tigers lost to Springfield, 45-42, in the second round of the PIAA Class 5A tournament Sunday at Cardinal O’Hara.

“He’s been with us seniors for all four years and he’s always been there for me,” Levy said through a wave of tears. “The day I got home from my surgery, he was there. And he’s always … just a text away, always there within five seconds if we need anything.

To Levy, Wolski is a coach, but is also like a big brother.  After her procedure, Levy was uncertain whether she would be able to return to form on the basketball court. She had a long and arduous rehabilitation process before she could step back on the floor.

“March 17th will be a year since my spinal fusion operation. I’m so thankful that I was able to play this year,” she said. “I’ve come a long way. We didn’t have any subs this year, so we all had to play through a lot, through fouls and injuries. It was a lot.”

Levy was integral to Marple Newtown’s success the last four years. But it was this season’s team she won’t soon forget. With Levy in the middle, the Tigers qualified for the PIAA playoffs and won 20 games, two feats the program had never accomplished prior to this season.

“I told her thank you for everything she’s done for us, you never gave up on us and you battled for four years,” Wolski said of Levy. “These kids don’t owe me a thank you ever, I owe these kids a thank you. They bring it every day and Haley’s one of them. I’m so proud of her.”

Levy is uncommitted to college, but she hopes to continue the sport she worked so hard to continue playing after her surgery.

She did some heavy lifting Sunday. With junior point guard Mary O’Brien unavailable, the Tigers’ already thin roster put in extra mileage against the Cougars. As one of the senior co-captains, Levy told her teammates to give it everything they had. And she led by example, scoring a game-high 20 points to go with several rebounds.

“I told everyone that they had to give 100 percent. The underclassmen, they stepped up and helped us out,” she said.

Levy had nine points in the third quarter to spur a Tigers’ comeback. Springfield had led by as many as 15 points before Levy and the Tigers fought their way back into the game. Marple twice trimmed its deficit to two points in the fourth quarter, but it never could pull even.

The game was personal for O’Hara graduate Wolski, who coached at his alma mater for the first time.

“Early on it wasn’t the way I envisioned it,” Wolski said. “I have a lot of memories in this gym. The lighting is a little different, the bleachers are a little different. Every time I come back to the gym, man, I get a lot of feelings. Two of my buddies who I started with here for two years came to the game and sat right behind the bench. I have five older brothers and we all went here. I got a lot of texts from people, I even got a text from Paul Romanczuk, who coached against me (at Archbishop Carroll) when I went here. It was great, a lot of people were reaching out to wish me luck.”

Wolski hopes this season is the start of sustained success for Marple Newtown girls basketball. The senior class — Levy, Nikki Mostardi and Jenna Coary — will leave behind a special legacy.

“The culture at Marple Newtown has changed,” he said. ”It’s not just we’re a football school or a baseball school. We’re all sports … and we really turned that around and I’m just super proud of the older kids who made it happen.”