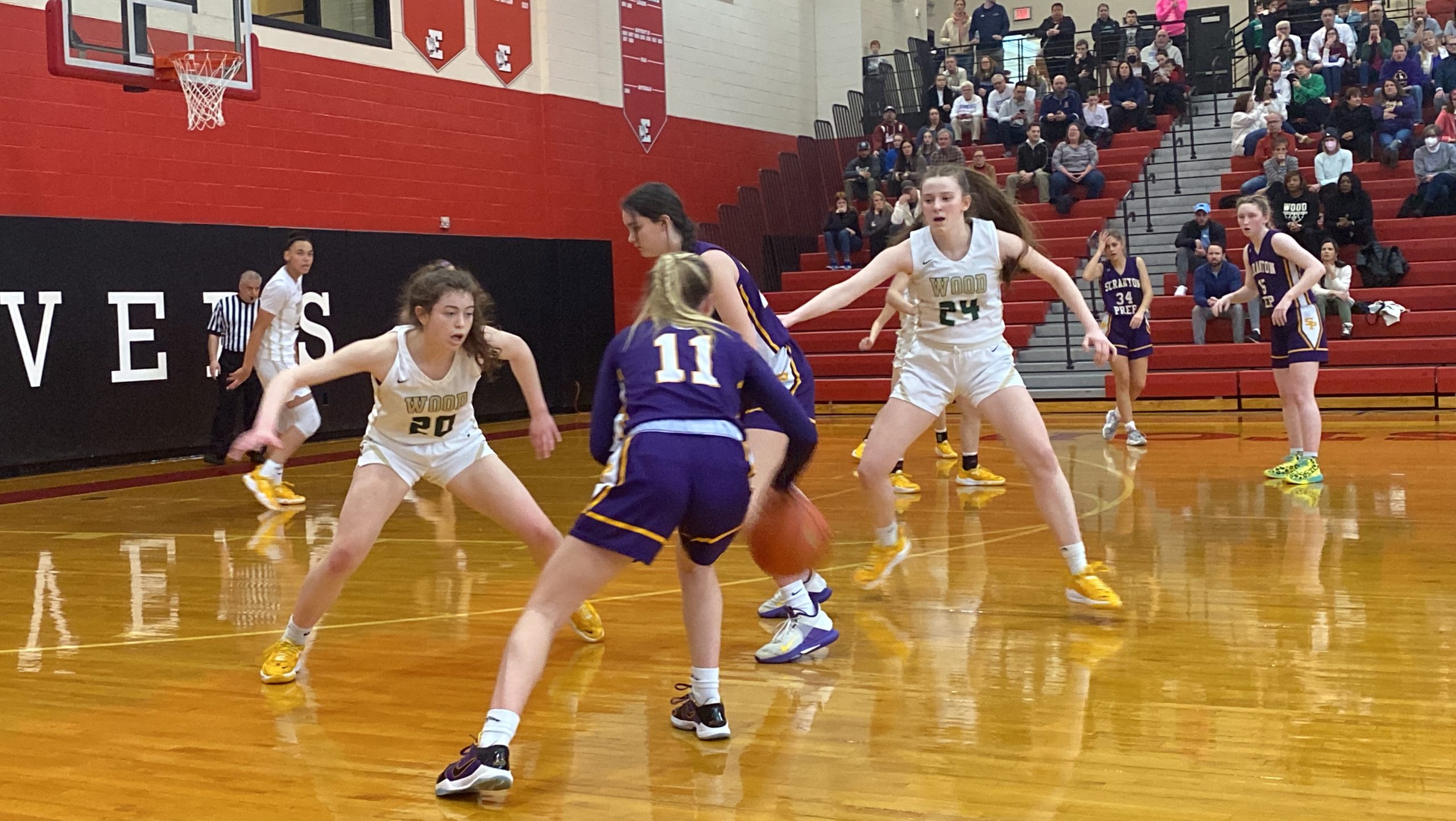 The Vikings trailed Scranton Prep 9-7 after the first quarter but allowed the District 2 runner-up Classics just 12 more points in their Class 4A quarterfinal Sunday afternoon. Deja Evans, meanwhile, provided Wood with a boost on offense after the break as the defending state champs rolled to a 44-21 victory at Easton Area Middle School.

“This was one of our worst offensive games of the year and we still ended up pulling the game out by 20,” Archbishop Wood coach Mike McDonald said. “So that’s all the focus is for us, we don’t care how we win, we also talked about years before we won 24-20, so it could of been worse. That could have been worse, but again, survive and advance is all that really matters.”

After the Vikings (22-5) held Scranton Prep to two points in the second quarter to take a 16-11 lead into halftime, Evans started the third scoring off a drive from the top of the arc – the first two of the junior’s 11 second-half points. Evans finished with a game-high 13 points as Wood advanced to the state quarters for the ninth consecutive season.

Wood faces District 1 champ Gwynedd Mercy for a spot in the semifinals Wednesday at a site and time to be announced. The Monarchs improved to 26-0 with 57-49 victory over Bermudian Springs.

“Gwynedd, we’re familiar with them,” McDonald said. “We know most of their kids, some of our kids play AAU together so it’ll be a familiar battle. I think they are a very good defensive team so we’ll see.”

Bri Bowen added 11 points, scoring the last five of the third quarter to give Wood a 28-16 advantage. A Gianna Cafarella jumper after a Lizzie Neville steal made it 28-18 but that was as close as the Classics could get in the fourth.

After a Cafarella free throw with 3:21 remaining cut Scranton Prep’s deficit to 34-21, Evans scored off a Shannon Morgan inbounds pass then added two more on a putback as Wood collected the game’s final 10 points.

“We wanted to get something easier,” McDonald said. “And we knew they were in foul trouble so we knew if we went towards the basket instead of relying on shots that we weren’t really hitting that it would put pressure on them to either stop us straight up or they would have to foul and get in worse foul trouble.

“So that was all the mindset was at halftime to try to try to put pressure on them going to the basket and it just seemed like Deja ended up with the opportunities to do so.”

The 21 points tied a season-best for points allowed in a game for Wood, the Vikings beating Archbishop Ryan 76-21 Jan. 11. Wood also began states with a solid defensive effort in beating Bishop McDevitt 68-24 in the first round last Wednesday.

“It’s really big for us,” Evans said. “We’re trying to become a better defensive team so having a good defensive game like that is really good.”

With the Vikings’ shots off early, the Classics grabbed a 4-0 lead and were up 6-2 after a Rita Collins putback. Wood used the free-throw line to score five straight points – the first four from Ryanne Allen – to go up 7-6 with 29.9 seconds in the opening quarter.

Cafarella, however, connected on a 3-pointer and Scranton Pen ended the first eight minutes leading 9-7.

A Bowen jumper dropped in to knot things at nine while Allen hit both ends of a 1-and-1 at 5:14 to give Archbishop Wood to lead for good.

Baskets from Evans and Kara Meredith had the Vikings up 15-9 before the Classics got on the scoreboard in the second quarter with a two from Maggie McGrath.

“We thought 11 (Neville) was primary for everything that they wanted to run and we wanted to take it out of her hands,” McDonald said. “We started off in a zone press and we were kind of giving them too much offense with the other kids were just speeding down the floor. So we went back to our traditional man, it was a little bit easier to stay matched up and keep them in front. And I thought Delaney Finnegan and Bri Bowen did an outstanding job anytime they were covering her.”

After Evans drove for a basket, Belardi’s trey had the Classics down 18-14 but Wood scored the next five – Finnegan driving for two and a 23-14 advantage.

Collins’ basket made it 23-16 before Bowen capped the third with two free throws at 1:26 then draining a corner 3-pointer off an Allie Fleming assist to put the Vikings up a dozen.

PIAA Class 4A Second Round