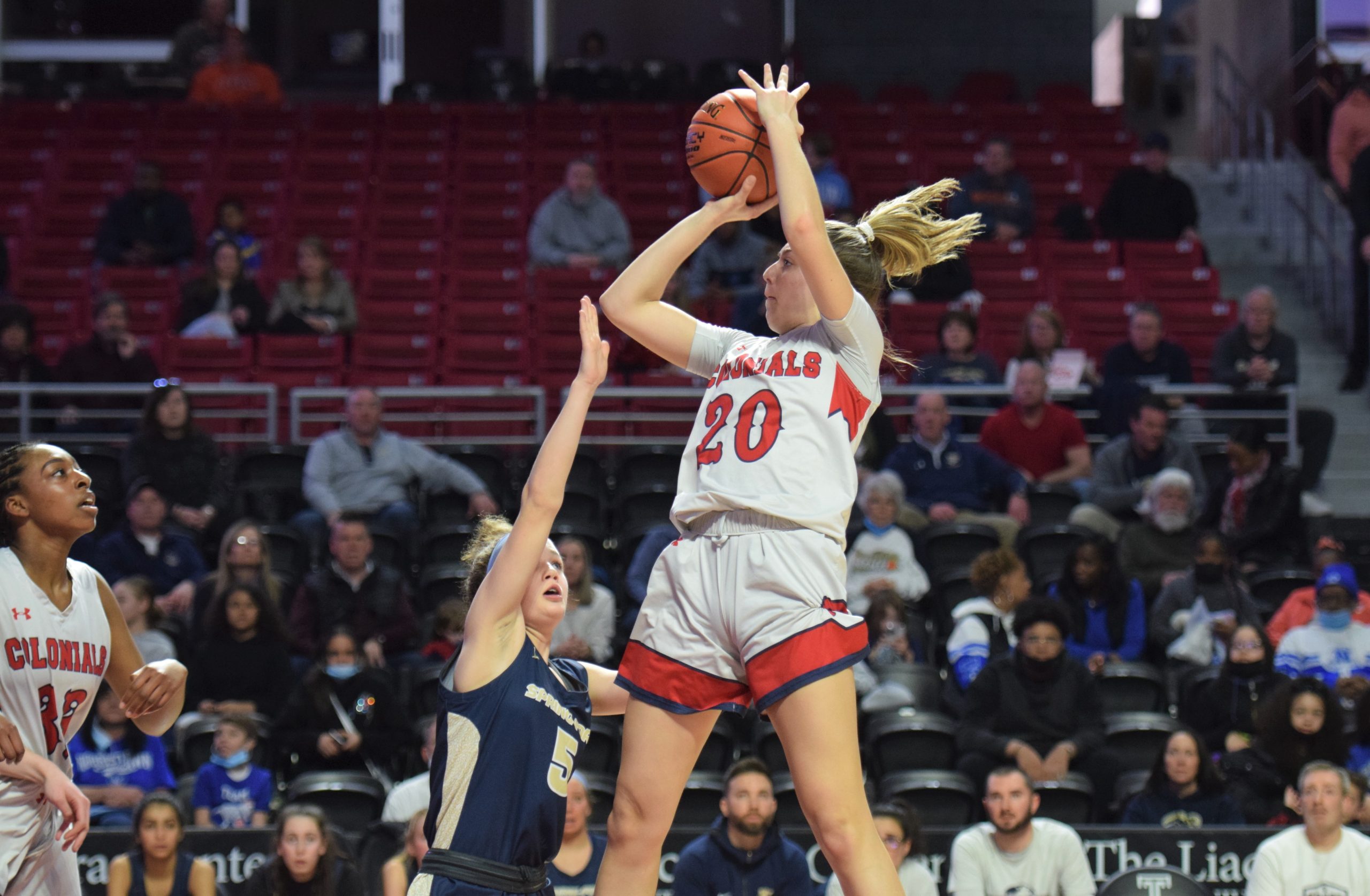 In 2020, the Plymouth Whitemarsh girls basketball team had a pair of comfortable wins in the first two rounds of the PIAA-6A state playoffs to reach the quarterfinals for the third time in program history (1985, 2017).

The day before the Colonials Elite 8 matchup with Bethel Park, the playoffs were put on hold due to the pandemic. The pause eventually turned into a cancelled tournament and their 25-4 season was over without getting to decide things on the court.

Last year, PW reached the District 1-6A championship game, but lost to Spring-Ford. Due to the pandemic, only district champions advanced to the smaller state playoffs. The Colonials season ended with an 18-2 record and no state playoff games.

Now, the Colonials are back in the state quarterfinals. The 31-0 Suburban One League Liberty Division, SOL Tournament and District 1-6A champions again had comfortable wins in the first two rounds – 63-32 over Manheim Township in the opener and 44-28 over Northampton in the second round – to get to the Elite 8.

“No one wants anything to end,” PW coach Dan Dougherty said after Friday night’s game against Northampton at Spring-Ford High School. “There’s only one way for this to end happy now. I said we didn’t celebrate the district championship enough because to go undefeated to a district championship in District 1 is insane – it is insane. We got one day off and then state tournament started. States is so different because you play these teams you don’t know, there’s travel involved.”

“We just want it so bad at this point,” PW wing Erin Daley said Friday. “We know every team from here on out is going to be good. There’s going to be some mess ups. We’re just going to have to get into things, into the game and keep winning. It’s one game at a time. We won today, we’ll celebrate today, but now we want to get past where we got stopped two years ago.”

“I think we’re lucky that we get to sit and watch the team that we play next,” Dougherty said Friday, when Perk Valley and Methacton were the second game of the doubleheader at Spring-Ford. “I don’t think either of these teams is going to be an easy matchup. We’ve thought all year that these PAC schools are really underrated.”

The Colonials have an experienced group in seniors Kaitlyn Flanagan, Lainey Allen, Jordyn Thomas and Fiona Gooneratne and juniors Daley and Abby Sharpe. All six saw the court as sophomores and freshmen, respectively, during 2020’s run.

In 2020’s 68-52 first-round win over Pocono Mountain West, 2021 grad Anna McTamney led the way with 32 points. Sharpe, as a freshman, chipped in 15 points. In the 53-27 win over Baldwin in the second round, then-sophomores Flanagan and Thomas scored 12 and eight points, respectively, and Sharpe had nine.

Sharpe is leading the balanced Colonials in scoring so far this state playoff run. The guard, who received an offer from the University of Pennsylvania over the weekend, is averaging 15.5 points through two games while Allen’s posting 13.5 points, Daley 9.5, Thomas 6 and Flanagan 4.5.

A win would send PW to the semifinals and a matchup against the winner of (1-3) Pennsbury and (3-3) Cedar Cliff Friday at a site and time to be determined.