Casey gets 1,000, then a KO as Lansdale Catholic topples Allentown Central Catholic to reach PIAA-4A quarterfinals 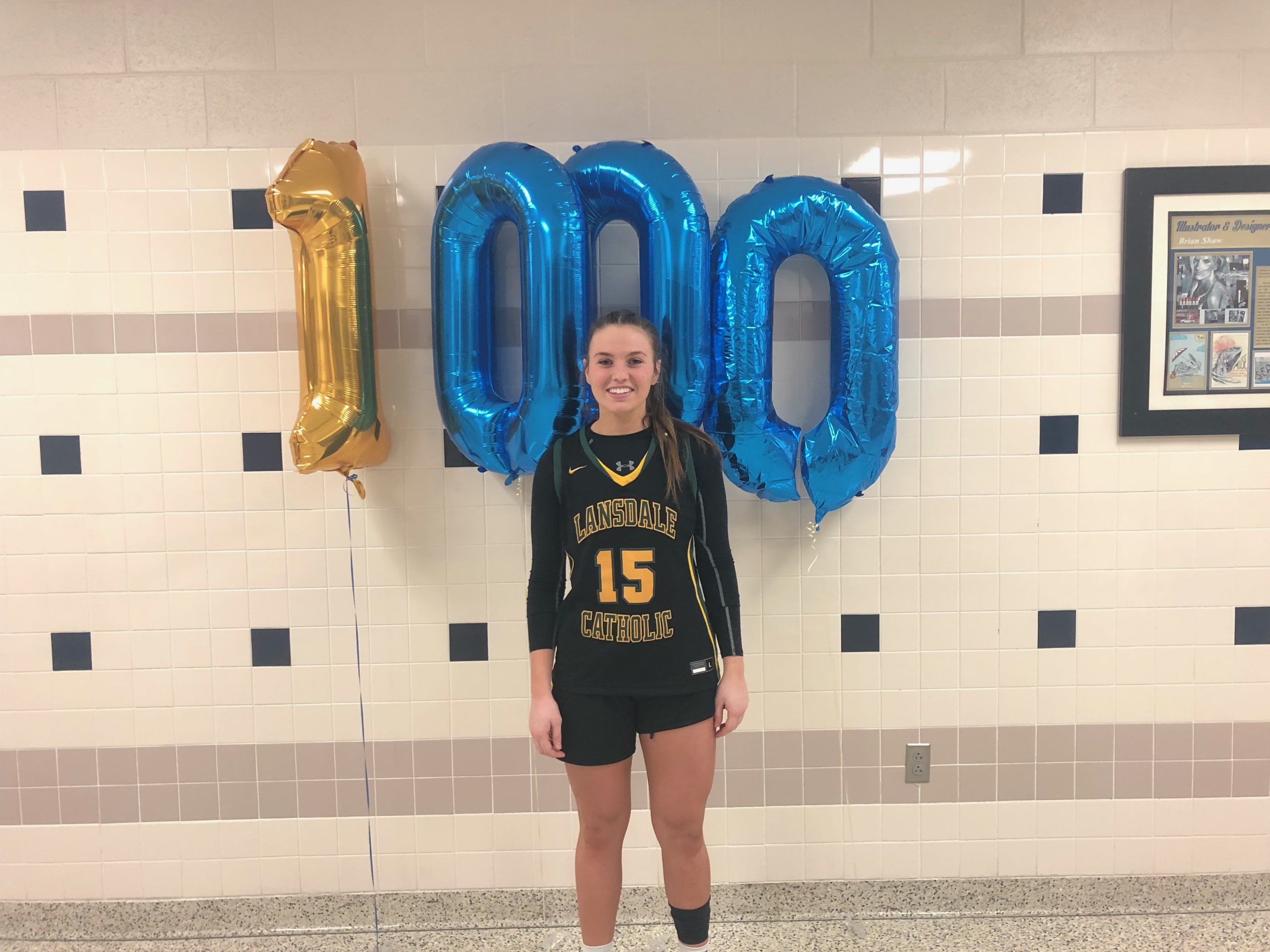 ROYERSFORD >> Gabby Casey had two things she wanted to do on Sunday.

The Lansdale Catholic junior hoped the first would lead to the second as she entered the Crusaders’ PIAA Class 4A second round clash with Allentown Central Catholic on the cusp of 1,000 career points and a win away from the team’s second state quarterfinal in three years. Casey has been tremendous this season, but she’s the first to say everything she’s done is a team effort which didn’t change Sunday.

Casey got her milestone and delivered the finishing touch as LC edged the Vikettes 49-41 at Spring-Ford with a strong second half effort.

“I really wanted to get it out of the way so I could go back and play my normal game,” Casey said after taking a couple dozen pictures with friends and family after the game. “I did feel a little pressure, but that only motivated me to get it going early and get on with it.

“It was really surreal, I’m really thankful I could spent that first moment with my teammates, they do so much for me and seeing them be so happy made it more special.”

The 5-foot-9 junior, a First Team All-PCL selection this winter, needed just nine points to hit the 1,000 mark. It looked like she would get it done before the first quarter break, jumping out with eight points in the first six minutes but was stuck on 999 when she couldn’t convert on her next three attempts bridging to the second quarter.

Finally, on a textbook Casey power drive to the rim, she got one to drop and was officially over the 1,000-point barrier. Scoring 1,000 points is always an impressive accomplishment, more so if it comes during a player’s junior year but factor in Casey only got 13 games as a sophomore in a COVID-19 altered season and the scale of her scoring prowess comes into focus.

“I knew at the beginning of the season where I was at and I really wanted to score it this year,” Casey said. “It served to motivate me over the summer and get me to where I could achieve what I wanted to achieve. It pushed me to try and score it my junior year, which luckily we made the playoffs and I had the chance to do it today.”

Casey would finish the game with 25 points, 10 coming in the fourth quarter, plus five rebounds, three assists, a block and eight steals. Freshman Nadia Yemola came in clutch with 11 points for LC and senior Lauren Edwards had nine. Freshman Saniyah Littlejohn scored four and was a game-changer in the second half with her defense.

Allentown Central Catholic didn’t have many answers for Casey defensively but what the Vikettes did have was a halftime lead. Playing their final game under legendary coach Mike Kopp, ACC was shorthanded in personnel but not in offensive execution in the opening half.

While the team’s leading scorer Julia Roth, also a standout soccer player, was out with a serious knee injury incurred during the District 11 semifinals, the Vikettes had their own offensive weapon in Molly Driscoll. The sophomore, who was fighting through some pain of her own, erupted for all 14 of the Vikettes’ second quarter points as ACC took a 25-22 halftime lead.

At the break, the Crusaders made a change. Instead of their matchup defense, they were going to play man-to-man and Driscoll – a former AAU teammate of Casey’s – was going to get an uninvited guest in her vicinity in the form of Littlejohn. The LC freshman took her assignment to heart and all but locked up Driscoll in the second half, holding the Vikettes guard to three shot attempts and just two points.

“(Driscoll) has been playing through a shoulder separation, so that just makes you realize how good she was before that injury, she was carrying the load for them,” LC coach Eric Gidney said. “We had to make that adjustment and hats’ off to Saniyah for being able to do that. What happened by doing that, it seemed like it busted their whole team and made them speed up which they’re not really comfortable doing.”

Through the rigors of the PCL season, Littlejohn cut her chops defensively against some of the league’s best players which she felt helped prepare her for her second half performance on Sunday.

“We had to build up the intensity on defense, she kept getting a lot of points which was hurting us, so we couldn’t let that keep happening,” Littlejohn said.”I just knew I needed to step up on defense. She was hitting a lot of midrange jumpers, I’m just trying to stay in front of them and take away their good hand, force them to the weak side.”

Both of Littlejohn’s scores came on a key run early in the third quarter where Lansdale Catholic erased the deficit and took a lead. Casey started the run by finding Edwards for a layup, Littlejohn scored on a terrific move and then a frantic defensive sequence ended with Casey flying out of bounds to tip a ball that led to an Olivia Boccella steal and finally a Littlejohn finish on the other end.

ACC responded to tie it up but  a 3-pointer by Yemola put the Crusaders back in front, where they would stay the rest of the game. The Vikettes scored just six points in the third but to no surprise, they continued to hang around well into the fourth quarter.

What helped keep the Crusaders in front was smart, well-executed offense. When ACC would blitz the ball with a second defender, the Crusaders were able to make a dish to a cutter and got at least five easy layups off their unselfish play.

“We knew this was going to be a grind-out heavyweight boxing match for 32 minutes,” Gidney said. “We were prepared for that, I think we handled their pressure.”

If the game was a boxing match, then the Crusaders needed someone to deliver the knock-out. It was already her day, so it made sense Casey would be the one to do it.

After assisting LC’s first two scores of the fourth, the junior scored the last 10 points of the game for her team, getting back-to-back baskets as the clock ticked under a minute for the proverbial finishing blows as LC went ahead 47-39.

“I think we played one of our best games today in terms of sharing the ball and playing good defense,” Casey said. “That really pushed us to stay with it and I think we found a way to fight through the adversity we faced going to halftime.”

Kopp, who is stepping away after a long career in the Lehigh Valley, received a nice ovation at the conclusion of the game.

“It was an honor and a privilege to go against Mike Kopp today, 1,040 wins and one of the best to ever stand on a sideline in Pennsylvania,” Gidney said. “To have a chance to go against them, pull out a win and be able to congratulate him was an honor for me.”

LC will take on District 3 champion Delone Catholic in Wednesday’s quarterfinal round at a site and time to be determined. When Casey was a freshman, the Crusaders had made the quarterfinal round but never got to play the game due to the pandemic cancelling the remainder of the season.

“The six of us who were on the team my freshman year, it motivated us,” Casey said. “Us wanting to get back there and the will to win will take us on, hopefully all the way to Hershey.”