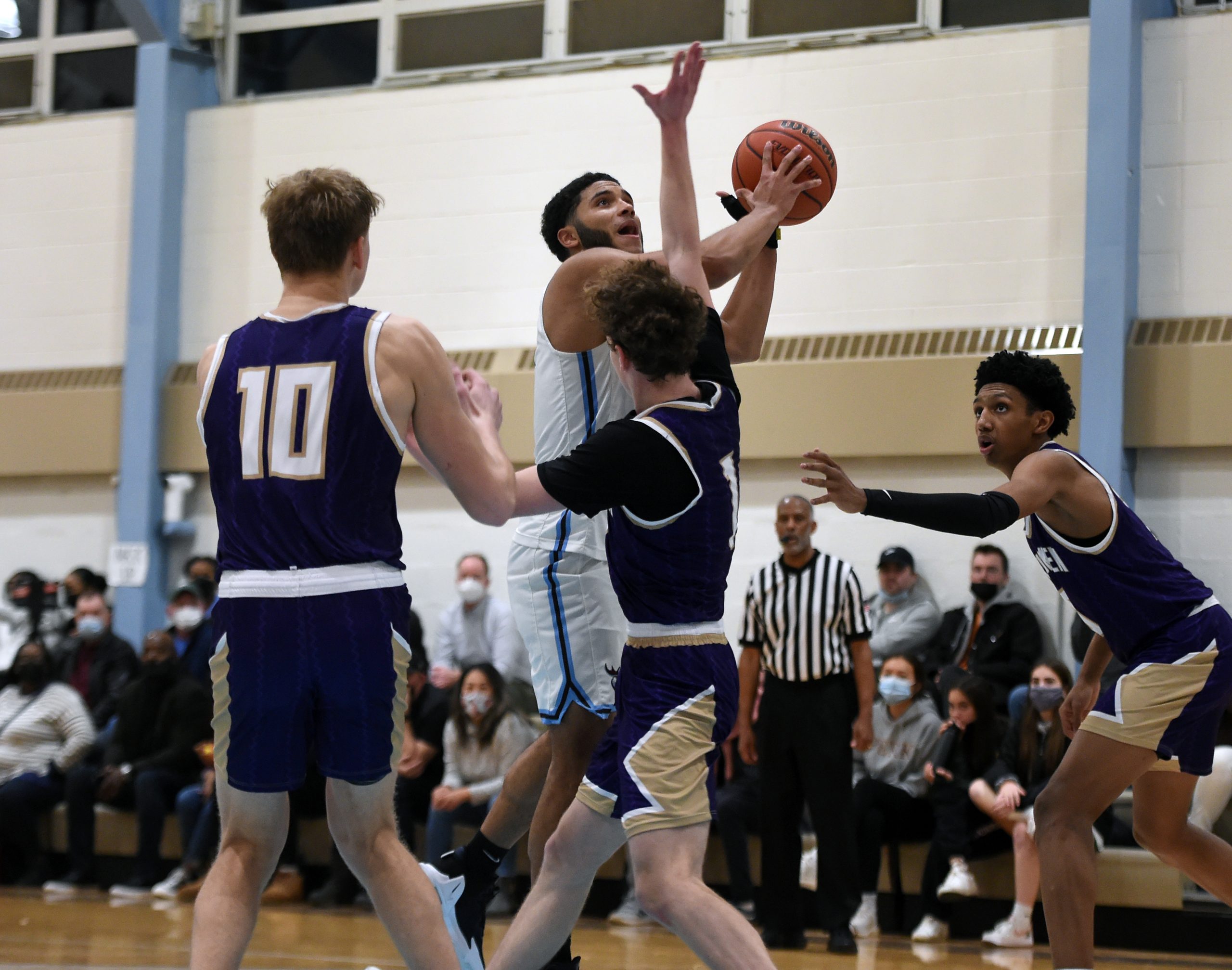 WESTTOWN >> Until several weeks ago, Jameel Brown had done an awful lot in high school basketball, but he had never experienced the postseason. A senior at Westtown, Brown is obviously a quick study.

The 6-foot-5 combo guard poured in 20 of his game-high 28 points on Friday to power the Moose to a 68-53 victory over league rival Academy of the New Church, which propels Westtown into a familiar place: the state title game for independent schools.

“In our round of eight in the Friends League Tournament, Jameel told me after the game that it was his first playoff game in high school,” recalled his coach, Seth Berger.

“When we went down (Washington, D.C.) to DeMatha in December, it was his first-ever high school road trip. So his growth as a player has been remarkable. He came here as a fantastic player and he has just exceeded everybody’s expectations.”

Already signed to play college ball at Penn State, Brown is a transfer from the Haverford School, and the Inter-Ac League does not stage playoffs.

“The level of play is ratcheted up a bit,” Brown said, when asked about the postseason. “This year I’ve gotten better at not getting anxious or having anxiety prior to games. I do pre-game meditation and that helps me with that.”

Now 30-7 overall, the Moose will be making their eighth appearance in the last nine finals of the Pennsylvania Independent Schools Athletic Association (PAISSA) Playoffs. Westtown’s has been the state runner-up four times and has captured three state crowns in that stretch, including a win in the last one in 2020. The tourney was not held in 2021 due to the pandemic.

“We finish unbeaten at home and we haven’t lost a game in the state this season,” Berger pointed out, but quickly added: “no jinx, no jinx.”

The top-seed in the PAISSA and winners of the last nine, the Moose will face No. 2 Perkiomen School on Saturday. Tipoff is set for 8 p.m. from La Salle University.

“To be able to finish off my high school career with a state title would be great,” Brown said.

On Friday at jam-packed Coach Downey Court, Westtown led most of the way, and turned aside a late comeback bid by the Lions (18-7) thanks to a critical six-point possession with 2:26 on the clock. It turned a tense seven point margin into a 64-51 lead in a flash.

“You have to hope you make your comeback earlier because we played the same guys a lot of minutes and late in the game our guys started to lose their legs,” said ANC head coach Kevin Givens, who is the all-time leading scorer at West Chester University.

A foul and a technical on ANC resulted in four Westtown free throws, and then point guard Quin Berger scored on a drive to wrap up the productive possession. Berger scored again and then 7-foot-2 center Dereck Lively slammed an alley-oop from Brown, which enabled Westtown to score 10 of the game’s final 12 points.

“This was, as we expected, a game to the very end,” Seth Berger said. “Kevin (Givens) does a great job, and their kids are fearless but it is based in skill.”

Seeded fourth, the Lions trailed by nine at the half and made several third quarter runs but never got any close than six. And when junior Matt Mayock knocked down one of his four 3-pointers on the evening, and Brown scored a pair of inside buckets, Westtown led 54-39 heading into the final period.

“We got back into it defensively, but then we came down, turned the ball over and made some mistakes,” Givens said.

“I thought we did a good job inside – that didn’t hurt us. We played defensively as best we could, but we didn’t get the calls. I thought my guys did a great job with help defense.”

In the first half Brown nearly outscored ANC all by himself, guiding the Moose to a 32-23 lead at the break. The Norristown native scored 10 points as Westtown staged a 12-3 second quarter surge to give the home team a cushion they would never relinquish.

“I credit my teammates,” Brown said. “I had a bunch of open shots. They recognized some mismatches and I made some shots.”

Mayock finished with 11 of his 14 in the second half, and Quin Berger added 10 points. Lively didn’t shoot much but still stuffed the stat sheet with nine points, 11 rebounds and four blocked shots. He has already signed to play his college ball at Duke.

Junior guard Elmarko Jackson paced the Lions with 19 points, but ANC did not have 6-8 senior Gabe Harris, who suffered an injury against the George School in a PAISSA Quarterfinal contest. But more than anything, ANC really hurt itself at the free throw line, going 4-for-12. Westtown was 17-19 from the line.

“Against a good team like (Westtown), you have to shoot much better,” Givens said.

Westtown 68, Academy of the New Church 53