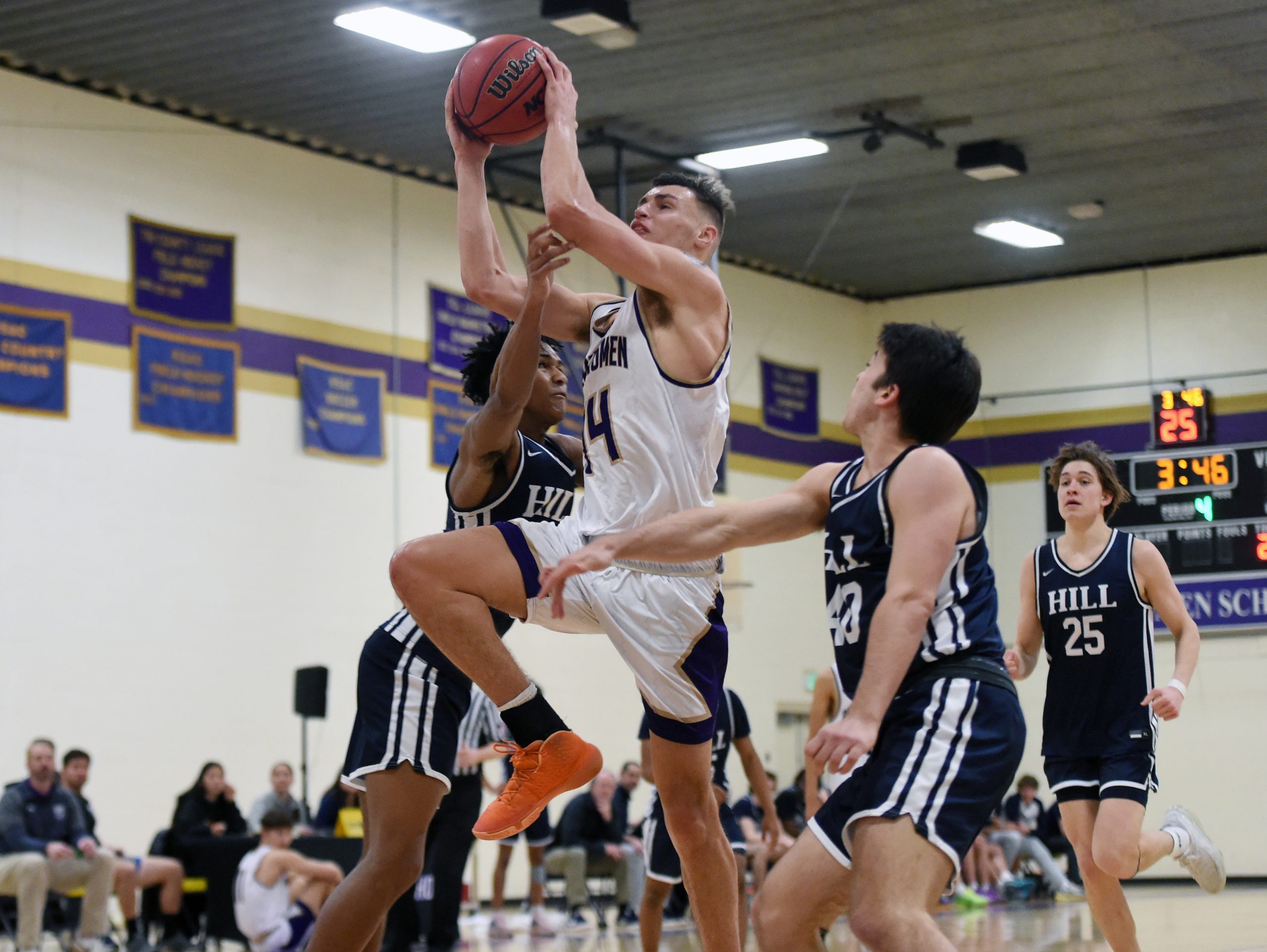 PENNSBURG >> The Perkiomen School boys basketball team has been waiting for another shot at Westtown since the Panthers’ Feb. 2 loss the Moose.

When the brackets for the Pennsylvania Independent Schools Athletic Association postseason tournament came out, the only path for a rematch was a championship game meeting between the two squads.

Perkiomen held up its end of the bargain on Friday night, locking down Hill School for a 76-39 win in a PAISAA semifinal behind double-digit efforts from Xaivian Lee (15), Ryan Dunn (12) and Thomas Haugh (11).

A few hours later, Westtown took care of business as well with a victory over Academy of New Church, setting up a title-game matchup with the Panthers on Saturday at 8 p.m. at La Salle University.

“I’ve been itching ever since we lost that game,” Daouda Dembele said. “They’re our big rivals, so we want to definitely get them back.” Perkiomen rolled Hill in the two team’s first meeting, an 85-57 Panthers win at Hill. It was another Perk route from the start on Friday against a Blues squad that had won seven of its last eight.

The Panthers built an early double-digit lead when Daouda Dembele slammed home a dunk off a feed from Bobby Rosenberger. They led 17-8 after a quarter of play and extended that advantage to 35-17.

Bobby Rosenberger dumps it off to Daouda Dembele for the slam. 16-6 Perk pic.twitter.com/OiDpwIvfcj

Perk’s lead grew to 20 early in the third and there was little to no doubt about the game’s final outcome when the Panthers took a 52-26 advantage into the fourth.

Augie Gerhart and Josh Cameron both finished with 11 in the season-ending loss for the Blues.

“They’re really good. They’re really deep,” Hill School coach Seth Eilberg said of Perk. “ I think you get to see their age and experience and physicality, size, length, really cause problems for us. That’s what we have to do. We have to get stronger as a program.

“We’ve got some good young guys who care a lot about it, and they’ll put the work in in the offseason, but we’re going to have to develop physically as a team to compete with teams like that.”

Perk certainly had its highlights on the offensive end, including highlight dunks by Dembele and Haugh but the Panthers’ suffocating defense was the story of the game.

There were certainly highlight plays on that end as well with blocks from Dembele, Dunn and Priest Ryan.

“From the jump we jumped on them defensively,” he added. “We wanted them to not get the ball in the post. I think we did a really good job of that, and we were just pressuring their guards. It was really tough for them to score in the first half.” The Panthers have had some really good teams under sixth-year coach Tom Baudinet, but they lost in the semifinals to Haverford School in 2018 and fell to the Moose in the semifinal round in 2020.

However, they aren’t celebrating just yet.

“It’s nice. It doesn’t really mean much if we don’t win tomorrow though,” Perkiomen School sixth-year coach Tom Baudinet said. “I don’t think there’s a whole lot of difference between losing in the semifinals and finals. It feels nice to finally get past this round. We felt like we’ve been there the last couple years and haven’t gotten there. It’s been Westtown in the way a couple times.”

After losing to the Moose in the 2020 semifinals, Perk got revenge twice during a 2021 season that saw the Panthers go unbeaten against high school competition — though no PAISAA tournament was played due to COVID restrictions.

Saturday will mark the biggest game between the two programs.

“Last year we beat them two times, we went 2-0 against them,” Rosenberger said. “Obviously the year before that they beat us in the semifinals, so it’s pretty much become a rivalry between us. It’s going to be exciting tomorrow.”

Friday’s loss not only ended the season for Hill but also the careers of 10 Class of 2022 players who helped the Blues rally to a MAPL runner-up and PAISAA semifinal finish.

“It’s a special class,” Eilberg said. “There’s 10 of them and they’ve been together a long time, some of them even before Hill growing up together. They’re great kids and I’m really proud of how they’ve represented the program.”

“We had some ups and downs this season, but I think the leadership and the character of that group were why we were able to turn it around,” he added.