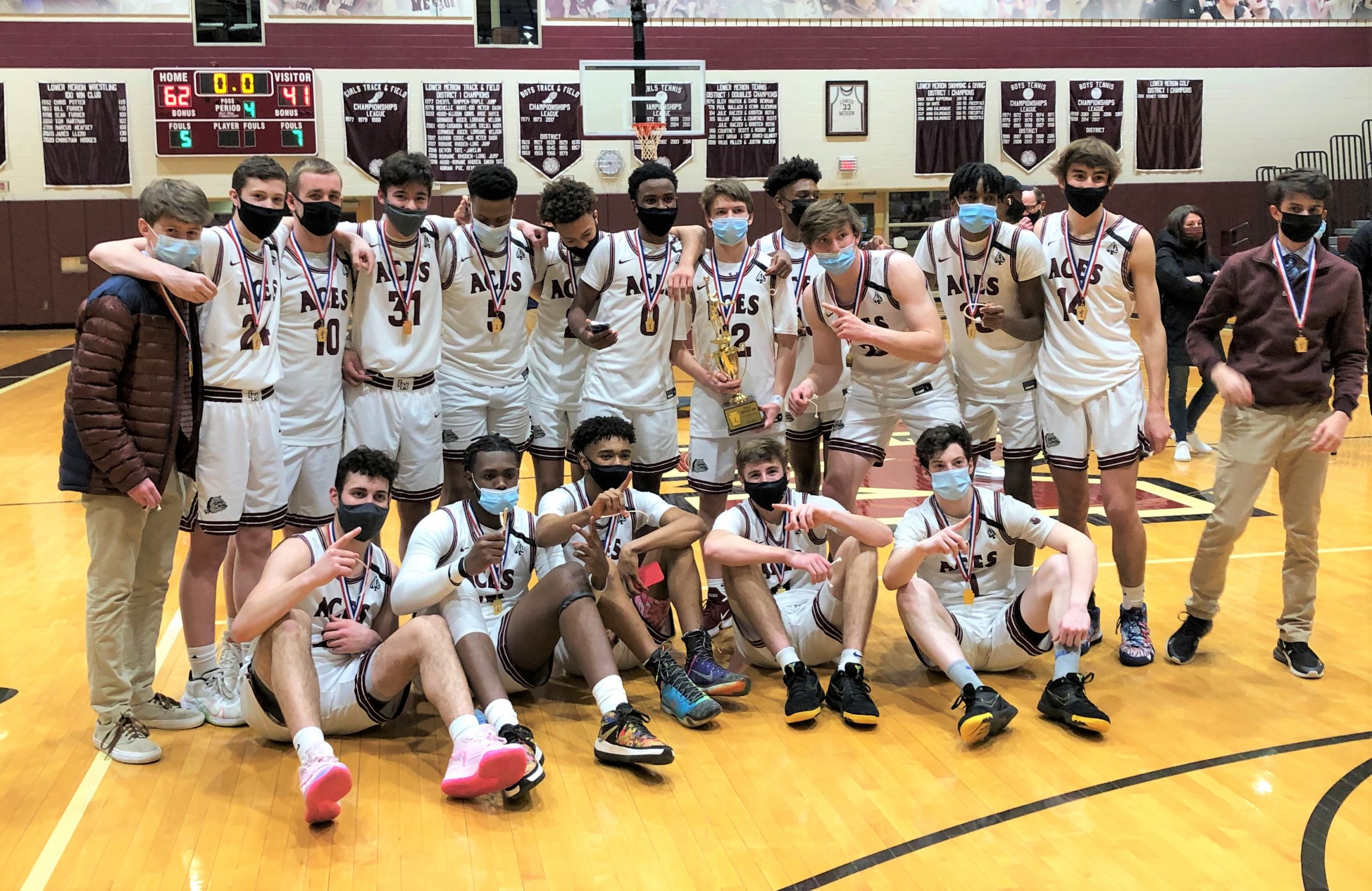 LOWER MERION >> Demetrius Lilley hit his first shot Friday night and the rest of his Lower Merion teammates didn’t miss much after that.

The No. 9 Aces’ standout junior big man was an impact player on both ends as he and Lower Merion caught fire early and never cooled off against No. 14 Abington. Once the Aces got going, the Ghosts simply couldn’t keep up in their quest for a fifth District 1 title in the last five years.

Lilley poured in 31 as Lower Merion topped Abington 62-41 to capture the 6A boys’ basketball title, the program’s first since Kobe Bryant was a senior in 1996.

“I was so excited, it’s amazing. We worked really hard for this,” Lilley said. “We weren’t ready to go home.

“I was just taking everything in flow, but I have to say, that basket did look pretty big to me.”

Lower Merion’s last four district title game appearances between 1996 and Friday had ended in losses but the Aces also didn’t have Lilley for any of them. The 6-foot-9 junior showcased the full depth of his abilities, scoring almost as many points as the Ghosts had as a team, shooting 13-of-16 from the floor, blocking and altering shots and hitting the glass for seven rebounds.

The big guy also went 4-for-4 from behind the 3-point line and his first make from deep kicked off a 13-0 run to end the first quarter. What had been a 6-4 game turned into a 19-4 Aces lead and the Ghosts felt blindsided as they tried to regroup.

“They came out on fire,” Abington coach Charles Grasty said. “It wasn’t our night. We didn’t have too much going but I also thought we were really flat. They beat us in transition, but hat’s off to them, they deserved it tonight.”

Lilley connected on two 3-pointers in the second quarter and his teammates his lead, both behind the line and in general. As a team, Lower Merion put away 15-of-19 shots from the floor and a scalding 6-of-8 from distance, a pace that coupled with some stuffing defense, built a 39-17 lead at the half.

Lower Merion was ready to guard Abington, using its press very well and also denying Rob Bell and Oreck Frazier the type of looks the two Ghosts seniors had thrived on all postseason. Frazier, who scored all seven of his points after halftime, noted Lilley’s presence was a difficult obstacle to overcome as well.

“He’s a great player, he’s like 6-(foot)-9, he could shoot but also back us down,” Frazier, listed at 6-foot-3, said. “We had to help down and that just left their shooters open and they weren’t missing. They matched up against us well.”

The second half started like the first had, with Lilley scoring seven straight for the Aces around a Frazier and-one that gave the hosts a 50-20 lead.

After both teams received their medals and the Ghosts were packing up, Lilley made his way over and shared a few words with Frazier. The Abington senior, off to Harvard to play football, said the Aces big man just wanted to congratulate him and his team on their season.

“I couldn’t even be mad, they were blowing us out but he was a good sport,” Frazier said. “He’s a great player, but on top of that to come over and say ‘great game,’ it showed great sportsmanship and I appreciated that he did that.”

“I had to do that, their whole team was full of great players,” Lilley said. “(Frazier), I think he’s a really good player so I wanted to give him his props.”

Sam Brown had a nice game playing off Lilley and point guard Sam Davison, scoring 15 points. Davison was a menace as well, with his four steals leading to instant offense and the Aces senior racked up 13 points while also dishing out eight assists.

Davison assisted four baskets in the third quarter and while Abington refused to fold on the game, the Aces kept scoring to thwart any sustained momentum. Zack Wong was the only other Lower Merion player to score, but the Aces were unselfish with the ball and united on defense.

“All of just worked together, we came strong and came out ready,” Lilley said. “We had that Mamba Mentality. It was just a great game from all our guys.”

Abington, which won district titles under Grasty in 2015, 2017, 2018 and 2019, saw a successful season come to an end. After a preseason COVID shutdown and a 5-4 start, the Ghosts won nine of 11 to close the year and say farewell to nine seniors.

“It was a good run. We didn’t look at it like it was this miracle run or anything, we felt we had the talent to compete,” Grasty said. “I had Oreck and Rob since their freshman year and everyone else since their sophomore years. We love all those guys to death, it’s the game of basketball, you win some and lose some but life goes on.”

Lower Merion advances to Tuesday night’s PIAA 6A semifinal. Due to the set up for the postseason this year, the Aces will host the winner of Saturday’s game between District 12 champion Archbishop Wood and District 11 champion William Allen.

With the higher seeds hosting all games in districts, Friday was actually Lower Merion’s first home game of the tournament with the No. 9 seed having won three road games to get the chance.