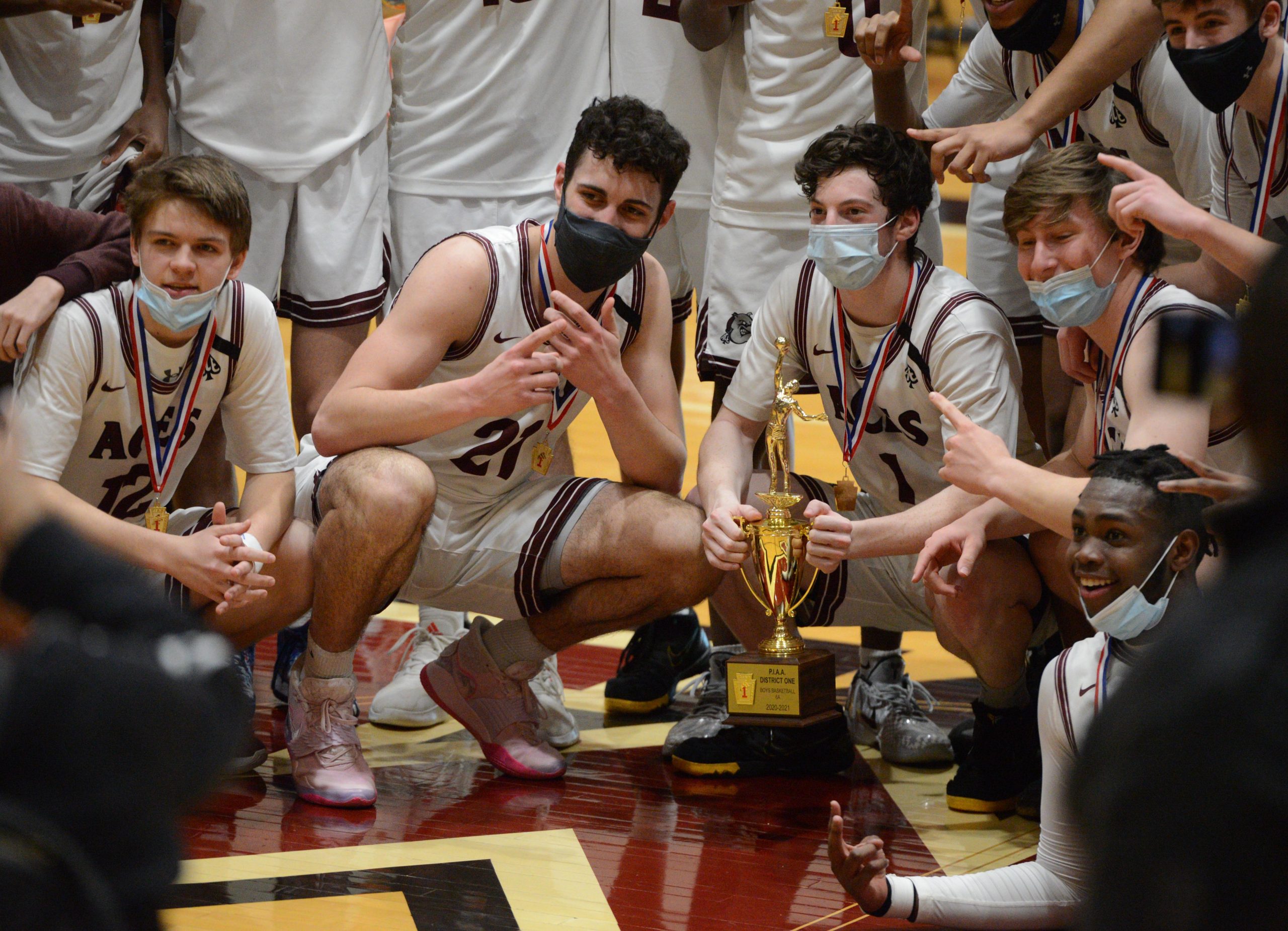 LOWER MERION >> The Lower Merion boys’ basketball team captured its first District 1 title since the days of Kobe Bryant with a 62-41 win against Abington in the District 1 6A championship final.

The contest was held, appropriately enough, in the Kobe Bryant Gymnasium, where the Aces won their first District 1 title since 1996.

“Winning it at home means a lot – Kobe’s never far from my mind,” said Lower Merion boys’ basketball head coach Gregg Downer, who coached the Aces when they won the District 1 4A title and PIAA 4A state championship with Bryant in 1996. “Now that we can associate this ball club with his [1996] ball club, I hope that Kobe and Gianna are smiling down from Heaven, and I hope we can send up a [district title] trophy for them to look at.”

With the win, Lower Merion advanced to the PIAA 6A state semifinals, to be held Tuesday evening at the Kobe Bryant Gymnasium. For the Aces, it’s their 11th consecutive trip to the PIAA state tournament – the longest current streak in PIAA 6A boys’ basketball.

Lower Merion junior 6-foot-9 center Demetrius Lilley, who scored 31 points Friday (including 3-for-3 from three-point land in the first half), said, “We came out strong tonight – we had the Mamba mentality – and we played as a team. We really prepared for this game, and we really worked hard for this moment.”

The Aces exploded for a 13-0 run in the first quarter. With Lower Merion leading 6-4, Lilley hit a trey from the top of the key; followed by senior point guard’s Sam Davison’s steal and layup. After an Abington miss from mid-range, LM sophomore guard Sam Brown drove in for a layup, was fouled and made the free throw. Lilley hit a trey from the right side to make it 17-4, then Brown connected on two free throws with 29 seconds left in the period.

“The key was intensity – we knew we had to come out strong and keep the lead,” said Lower Merion junior guard Jaylen Shippen. “We were talking in the locker room before the game about how we hadn’t won a district title in the last 25 years. Winning it meant a lot to us, and we wanted to win it for Number 33 [Kobe Bryant]. Coach Downer made it a real big point that we had to get it done today.”

“Lower Merion came out on fire,” said Abington head coach Charles Grasty. “They are a good team who made shots and we missed shots early. They beat us in transition – hats off to them.”

By halftime, Lower Merion enjoyed a 39-17 advantage. In the first half, the Aces connected on 15 of 20 field goal attempts (6-of-8 from three-point territory). Of the Aces’ 15 field goals, 10 were assisted.

Davison said, “The pre-game message was assists – assists are key. We really played as a team today. Playing hard, getting steals, getting back in transition, playing defense, hitting shots – we did everything.”

Lower Merion kept up the pace after halftime. Lilley’s trey from the right corner (his fourth trey in four attempts) made the score 44-17; then a few minutes later an Aces 6-0 run consisting of a Lilley putback, a Brown layup underneath (assisted) and a Davison steal and drive gave the hosts a 50-20 lead with 4:06 remaining in the period. Lilley, Davison and Brown combined for 59 of the Aces’ 62 points.

With the 30-point lead that the Aces held in the third period (twice), the running clock was in effect during the entire fourth quarter.

“It was a good all-around team effort,” said Downer. “Sam Davison is our engine, I think he’s one of the most underrated point guards around. Sam Brown had his 3 ball going. Zack Wong did some good stuff for us tonight.”

The Aces won four games in the District 1 6A tournament to capture the district title, including a 59-50 win against top seed Cheltenham. Following the Aces’ win in the district opener against D-West, Downer reflected on Lower Merion’s post-season chances.

“To win the state title, you need to win six games, and that seems pretty daunting,” said Downer. “But we’re going to take them one at a time. I don’t care if they are at home or on the road, we are going to be ready with a good plan. We always tell our kids to throw the seeds out the window, and especially now in a COVID year. Things are very unusual.”