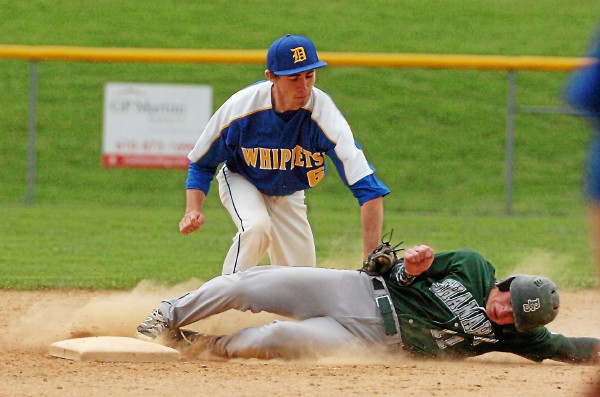 DOWNINGTOWN — The Downingtown West baseball team has ascended to the top of the Ches-Mont National Conference this season mostly on good pitching and defense.

However, the Whippets offense has not really resembled the 1927 New York Yankees.

At a cool Bishop Shanahan High School Monday afternoon, the Whippets exploded for seven runs in the final three innings, banging out 10 hits on he day as they rode the stellar pitching of Ken Jarema, who allowed just four hits in a convincing 7-1 win over the Eagles.

Downingtown West (11-3 Ches-Mont, 11-3 overall) broke open a pitching duel between Jarema and Bishop Shanahan’s (6-7 Ches-Mont, 6-7 Ches-Mont) Frank Chubb, scoring three runs on three hits and was also aided by a Shanahan error in the top of the fifth inning.

Alex Jankowski got the big hit for the Whippets, lacing a two-run single to center field.

“The past couple of games I have been seeing the ball real well,’ Jankowski said. “I have been just trying to make contact and hit the ball up the middle. And we know Chubb is a good pitcher because he beat us here last year and we wanted to score first.’

Jarema and Chubb held both teams scoreless as they batted each other tooth and nail but the Whippets broke through in the top of the fifth. The rally started when Jason Borosky legged out a infield hit with one out.

Then J.P. Bell hit a hard grounder to second that looked like it would be a double play. The ball ended up in the outfield and Bell made it all the way to second base, putting runners on second and third with one out.

Up stepped Jankowski who broke the game open with the big hit. Two batters later, Josh Marcelli knocked in Jankowski with a long double to make it a 3-0 game.

“This season we have been getting good pitching and our defense has been decent,’ Downingtown West coach Dave Oleszek said. “Today, we put the third part of our game together and I hope it continues. Even some of our outs were hit hard. It was good to see.’

Shanahan touched Jarema for a single run in the bottom of the fifth inning when Greg Sampson roped a long RBI triple to right field, scoring T.J. Booth, who had reached on an infield single. But Jarema got Jeff Zebrowski to fly out to end the threat at 3-1.

Jarema was brilliant for the Whippets, allowing just four hits, while striking out nine batters and walking just one to earn the decision.

“Today it was a pitchers duel and usually in those kinds of games it is the team that blinks first that loses and today that was us,’ Bishop Shanahan coach Brian Boyko said. “But you are not going to win many games getting just four hits.’

Downingtown West put the game away into sixth inning when they plated three more runs on four hits, knocking Chubb from the game and then touching reliever Alex Consalvi to make it 6-1. The Whippets got big hits Nick Campani, who had three hits on the day, and a two run single from Jarema, who helped his own cause.

“Today I was trying to get ahead of the hitters and keep my fasatball down in the zone,’ Jarema said. “And even though these games are like playoff games we take them all the same. We come out and compete hard and hopefully we can get the Ches-Mont championship.’

The Whippets got a three hits from Campani, two hits and three RBI’s from Jankowski and two RBI’s from Jarema.

Hitting is contagious and Oleszek hopes it keeps up for the playoff push.

“We swung the bats aggressively today and I hope it keeps going for us and gives us that third part of the game and we will be tough,’ Oleszek said.