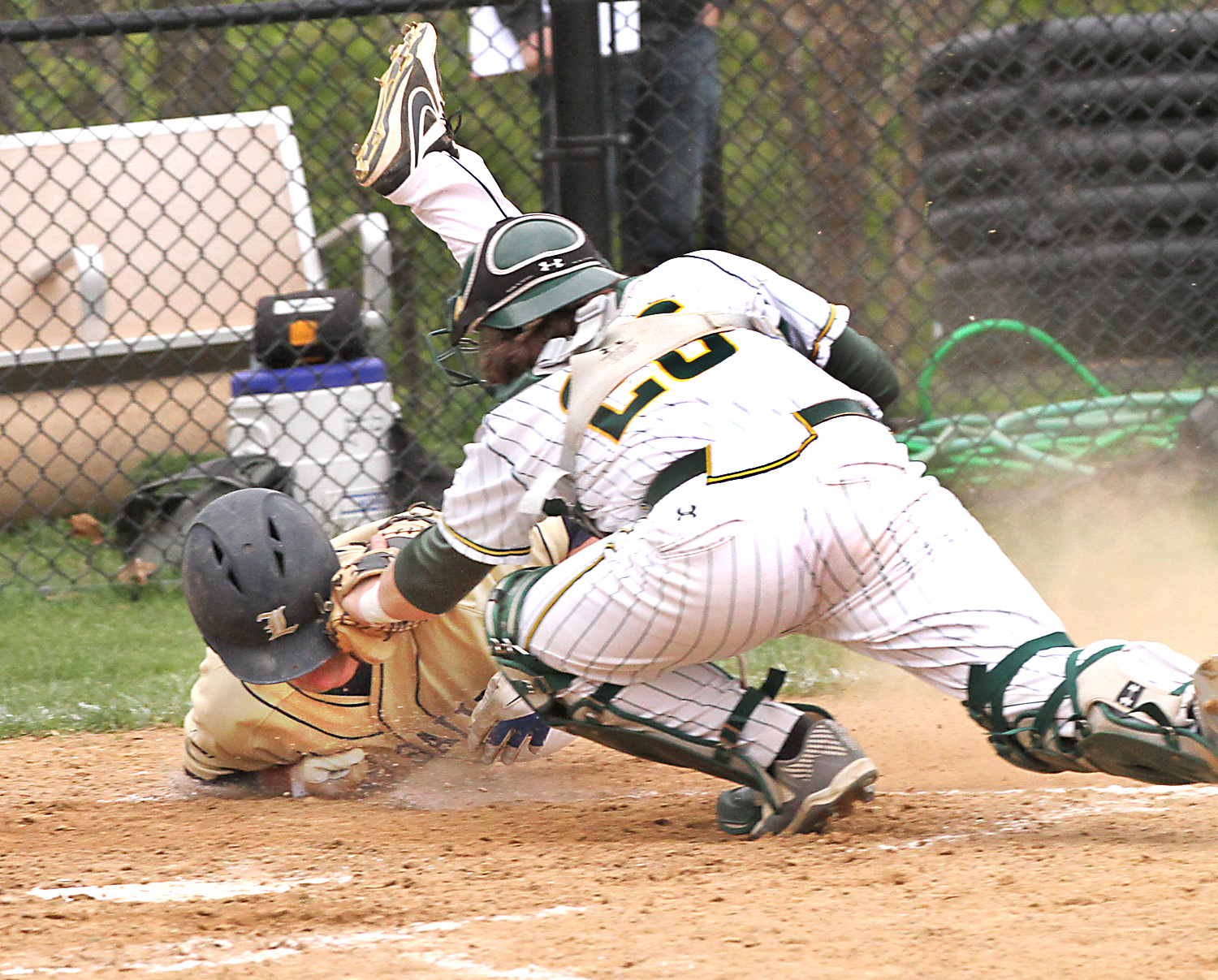 UPPER DARBY — For just a moment after he poked his seventh-inning single to the opposite field, La Salle’s Brian Buckley had a flash of concern wash over him.

He’d seen two Explorers cut down at the plate in as many innings, keeping Bonner-Prendergast even in a game in which it was being tripled up in hits. With pinch-runner Connor Williams on second, there was a little trepidation as Buckley watched Bonner-Prendie right fielder Jake Miller wind up for a play at the plate.

“I was a little — I don’t want to say worried,’ Buckley said. “I know Connor is probably our fastest runner on the team, and I didn’t really kill the ball into the outfield, so I knew he had a decent chance of scoring.’

That worry left his mind in less time than it took Williams to round third and slide safely ahead of the throw, the winning run in La Salle’s 3-2 Catholic League win Monday.

Bonner-Prendie’s defense kept it in the game, aiding a gutsy effort by starter Colin DiGalbo. In the fifth, Andrew Ciarlone (pinch-running for Buckley) was tagged for the final out at the plate after Ian MacIntosh’s single to left was flagged down by Nick Lazer and relayed through third baseman Evan Raiburn to Steve Furman at the dish.

“It’s exciting,’ Goggin said. “It’s not all the time that you get to throw someone out at the plate, and with our luck this year, there’s always been something going wrong or there’s an error or a bad throw and we won’t get the guy at home. But today, we got two good throws, two good relays and we got the guys. But it still wasn’t enough.’

The defense buoyed a surging DiGalbo, who survived five hits on 56 pitches in the first two innings with just two runs on his ledger, via James Herron and Greggory Sywulak RBI base knocks. Then he got into a groove, scattering eight hits over six frames, walking none.

“I was just settling down and I wasn’t thinking too much about it,’ said DiGalbo, who got a no-decision. “I was just pitching and having my team behind me. I just put it over the plate, put it in play and let my team do the rest.’

Those stellar defensive plays could have given Bonner-Prendergast (6-6, 2-4) the boost it needed to surge ahead. But James Dougherty had other ideas.

Where the La Salle baserunners injected drama to the game, the big righty managed to keep things remarkably even-keeled. He gave up just four hits over seven innings, including an RBI single by Goggin in the first and a hit to Brendan Phillips to lead off the fifth that turned into a run on Richie Tecco’s groundout. Dougherty only walked three, and despite a 6-5 frame that fits the part of a power pitcher, Dougherty didn’t strike out a single batter.

He preferred to nibble on the edges of the strike zone and let his fielders do the work. It was effective: He never faced more than five batters in an inning and retired seven of eight hitters after Tecco’s fifth-inning groundout tied the score.

His sturdiness allowed the Explorers’ hitters enough peace of mind to strike again.

“I was just pitching to contact, throwing as few pitches an inning as I could to keep it efficient and throw strikes,’ Dougherty said. “I just let my defense do the work.’

“It’s pretty crushing to have two guys (thrown out), but Doc came back each inning 1-2-3 like that,’ Buckley said. “It was all credit to him for changing the momentum back in our favor. … He just sat them down 1-2-3 every inning, so that was key.’

That was fulfilled in the seventh. After Raiburn struck out the first two hitters, he allowed a solid single to Kyle Hemcher. The DH moved to second (by inches) on a wild pitch, then was replaced by Williams, who sprinted home on Buckley’s solid single to right for La Salle (9-4, 5-3).

For Bonner-Prendie, Monday was more of the same in a middling season. Its four Catholic League losses have come by eight total runs. What transpired against La Salle was typical: The Friars have done enough to stay in games and threaten to enter the upper echelon of an extremely balanced and talented Catholic League, but they’ve lacked the incisive play or at-bat to take them to the next level.

Coach Joe DeBarberie praised his team’s effort compared to a loss to Penncrest last Friday in which the Friars coughed up six unearned runs, but there’s still concern as to what they have to do to get over the hump with the sands of the season quickly running through the hourglass.

“It’s very frustrating,’ Goggin said. “You think with all that we had today you’d get a W, but not today. It’s a rough one.’