Dunbar and some defense all Haverford School needs 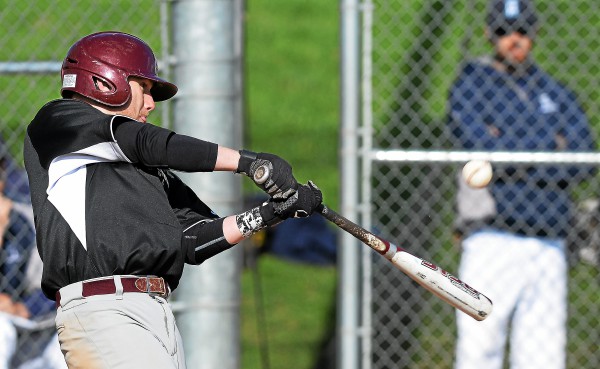 NEWTOWN SQUARE — Bob Castell is the first to admit that this year’s Haverford School team differs in composition from many of his recent squads. And he’s equally quick to caution that that’s not a negative.

Perusing his roster, Castell struggles to find someone to tab as his staff ace. It’s not for a lack of options but abundance. And on a day like Friday, who could really notice the difference anyway?

Determining a hurler hierarchy wasn’t on the mind of the Fords coach as he watched Tyler Dunbar sail through six shutout innings, then navigate a bases-loaded jam in the seventh to seal a 4-1 win over Inter-Ac League rival Episcopal Academy.

Dunbar is one cog on a pitching staff that has the Fords (14-3, 3-2) near the top of the league. Whether or not he — or Mike Gindhart, Cameron Miller, Ben Tracy or Mike Warnick — is deemed the guy on any given day has no bearing on performance. And even if Dunbar did the job of an ace Friday, scattering six hits while striking out six and walking just one, it doesn’t much matter to him if he’s officially denoted as such.

“It’s fun because every day, all the pitchers are working hard together and everyone’s contributing,’ Dunbar said. “There’s no leader, but everyone’s got each other’s back.’

The win is Dunbar’s third of the year, one of five Fords with multiple wins in divvying up the pitching burden. He’s one of many who can do the job, especially when backed by a Fords defense that flawlessly recorded 10 groundball outs, including a vital and astute 6-5 forceout by David Hogarth to quell the seventh-inning threat.

The defense was the difference between Dunbar and his opposite number, EA’s lanky left-hander Cam Van Hoorebeke. He was touched for a leadoff triple (that could’ve been played better in the outfield) by Kevin McGowan in the fourth that became a run on Frank Cresta’s groundout, but that would stand as the only earned run allowed by EA (9-12, 1-4).

McGowan reached on an error to start the sixth, Van Hoorebeke’s final frame, before Brian Hyland singled him home. Two errors led to Hogarth’s RBI single in the seventh that charged two unearned tallies to the account of Ben Burman, insurance runs that proved necessary.

“We knew he’s a pretty good pitcher,’ said McGowan, a two-time All-Delco and La Salle signee, of Van Hoorebeke. “We wanted to hit the ball hard, put the ball in play and good things happen. As long as we get on base, good things will happen.’

Generating offense Friday required a slight recalibration from the Fords, who are used to beating teams with the longball. Haverford School has bashed 12 homers, thanks largely to the tiny confines of its home field. But with the wind blowing in at EA’s spacious field, that option was out the window.

The adjustment, though, wasn’t severe.

“We try to stay away from that, all the home run talk,’ said McGowan, who leads the long-ball parade with a county-best four. “We know we have a short porch, but we like to put the ball way over. When we come to a different field, we like to live in the gaps, run for a little bit, extra-base hits. We don’t really change much.’

That’s what McGowan did in the fourth, pulling a ball over the head of right fielder Will Phillips and chugging around to third.

EA’s bats didn’t awaken until the seventh. Dunbar coasted through the first six innings, needed just 68 pitches to get around four hits. But Dylan Everly drew a walk to start the inning, followed by an infield single by Joe Chambers and a dunker by pinch-hitter Quinn Dudek.

There was no panic, though, from the usually calm Dunbar.

“He pitched well the whole game,’ McGowan said. “We thought we’d get him some insurance runs. We knew he was going to get out in the seventh, finish the game out for us. We believed in him. We didn’t have to say much.’

Dunbar got Phillips to sky to left on a ball that Everly could’ve tagged up but didn’t. Isaiah Payton bounced into the forceout to short to push home a run before Dunbar got AJ Lotsis to wave at a pitch to end EA’s 10th loss in 11 outings.

“It’s happened a few times recently, so we’ve just kind of got to pick it up together and start making the plays and start coming together as a team,’ Van Hoorebeke said.

Perhaps part of the poise Dunbar showed late stemmed from knowing that help was waiting if needed.

“We just have faith in each other,’ Dunbar said. “We know that if you don’t get it done, the next guy is going to get it done. … We just know that we’ve got to do our job, and the next guy will do his job and we’ll be fine.’

St. Joseph’s Prep 3, Archbishop Carroll 0: Nick Argentieri’s bunt single in the fifth inning was the only hit relented by Prep’s Colin Scanlon, who struck out eight, as the Hawklets won their seventh straight.

The lack of offense spoiled a solid outing by Chris Altopiedi, who scattered six hits in 5 2/3 innings.