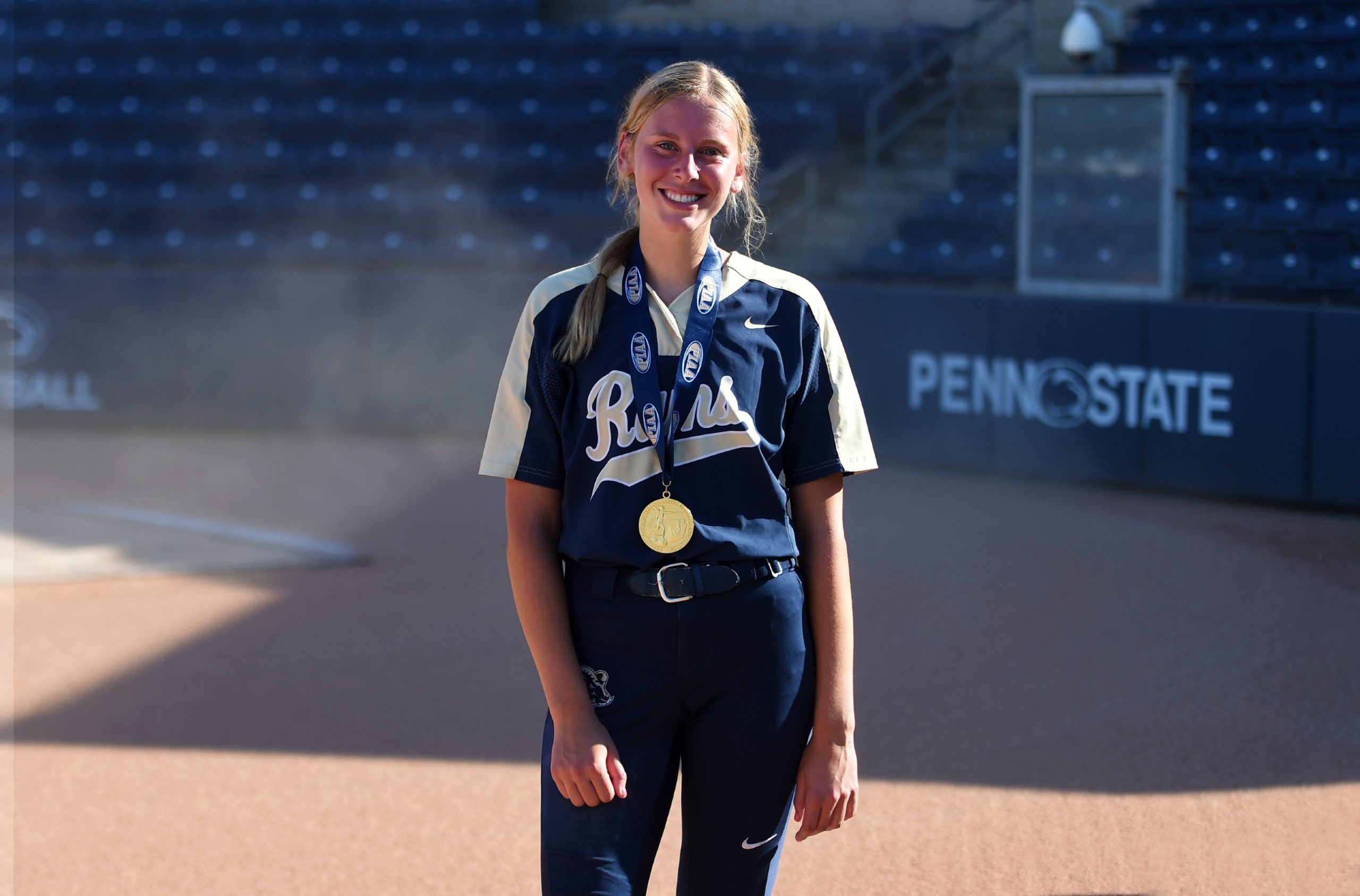 Spring-Ford's Juliana Scogna, pictured shortly after pitching the Rams to the PIAA Class 6A championship at Penn State University on June 17, is the 2022 Mercury All-Area Softball Player of the Year. (Owen McCue - MediaNews Group)

Spring-Ford had a number of people who crafted fitting finales to their scholastic softball experience this spring.

None bigger than what Jules Scogna put together.

Scogna was the primary arm for the Rams during their extended post-season run. She helped them qualify for the Pioneer Athletic Conference playoffs off a perfect regular-season run, reach the District 1 Class 6A playoff semifinals before culminating the year by winning the PIAA Class 6A championship at Penn State University.

A solid, memorable season was capped by Scogna emerging as The Mercury 2022 All-Area Softball Player of the Year. Scogna was integral to the Rams recent run of dominance, the right-hander earning state playoff victories in each of her three high school seasons (no season in 2020).

She started playing softball when she was 7-8 years old. She started pitching around that time, also playing first base and infield.

“I was real bad younger,” she admitted.

But work with pitching coach Joan Ferguson got her on track, and by her freshman year in 2019 was worthy of being the team’s No. 2 pitcher who was given opportunities in key spots.

“Obviously, I was impressed with her,” Spring-Ford head coach Tim Hughes said. “She came to us as a freshman. We’re aware of younger kids coming up.

“Her numbers would have been better if someone wasn’t in front of her. But her accomplishments outweighed that.”

Scogna had an appropriate role model in her mother, who as Colleen Crowley played softball at Methacton in the early 1990s.

“She’s more like the calm one, the cheerleader,” Jules noted. “My father’s (Bob) more nervous during games.” Spring-Ford pitcher Jules Scogna, right, is greeted by her teammates after finishing off a complete game shutout in the PIAA Class 6A championship at Nittany Lion Softball Park. (Owen McCue – MediaNews Group)

Coming off an All-State junior season, and helping the Rams win the District 1-6A championship, Scogna came into the spring with several items in focus.

“I worked on mechanical issues. Fine tune, to get arm strength up,” she said.

Her pitch repertoire is anchored by her “drop” ball, She throws a curve and two-seam pitch off the “drop,” along with a screwball she’s dubbed her “payoff pitch” for racking up strikeouts.

Along with her pitching and batting skills, Scogna joined with classmates Karissa Potteiger, Ali and Lexi Wescott and Madison Williams — the Big Five, as they dubbed themselves — in providing solid leadership to their younger teammates. That proved very important when injuries and personnel issues challenged solidity in the team’s lineup.

“Each led in her own way,” Jules said. “Off the field, I was vocal about getting things done. On the mound, I led by body language. Most of our infield was new, so it was important to be relaxed.”

“Her demeanor on the mound was settling,” Hughes added. “Talent-wise, she’s the best. Get squared away, then full speed ahead.”

The state championship game was a perfect example of Scogna’s control on the mound. Against Seneca Valley, District 7 champion playing in its first state-title game since 1992, she held the opposition to a pair of hits and one walk; though not recording any strikeouts, she got SV batters to put the ball into play against the Rams’ perfect, stalwart defense.

“That was the technique of her and her pitching coach,” Hughes said. “Put the ball where it’s most beneficial.”

She was equally unflappable a round earlier when Scogna outdueled Gatorade Pa. Player of the Year Julia Shearer to unseat defending PIAA champion North Penn in a 2-0 semifinal victory where she scattered eight hits in the shutout.

Scogna worked out of early jams to shut out a potent North Penn offense and a 5-2 loss to NP in the District 1-6A semifinals. Spring-Ford became the first Pioneer Athletic Conference team to make a PIAA title game.

Scogna scored one significant accolade recently, being named to the Pennsylvania High School Softball Coaches Association (PaHSSBCA) 2022 All-State Team. She was one of four Rams among the six players from Pioneer Athletic Conference programs named to the team, which drew from more than 400 nominations by high-school coaches and media members to fill first- and second-team lineups in each of the state’s six classifications.

Scogna was one of four first-team pitchers from Class 6A, joined by North Penn’s Julia Shearer, Quakertown’s Sydney Andrews and Haverford’s Emma Taylor and further distinguished herself by being named Class 6A’s Pitcher of the Year.

She was joined on the All-State team by teammates Caitlin Ashley, Riley Gancasz and Ali Wescott. Her future plans call for Scogna going to Boston University for the coming academic year. She will be on a pre-med track and join the Terriers’ NCAA Division I program, which fell short of a fourth straight Patriot League tournament championship this spring when it lost to Lehigh University by scores of 1-0 and 4-1 on May 14.

“It’s in the middle of the city, the academics are good and the coaches welcoming,” were the reasons Scogna cited for choosing BU. She joins the softball team for its eighth season under head coach Ashley Waters.

“I’ll be fighting to earn a spot” when team workouts start Aug. 31, she said. Between now and then, Jules plans to rest and take part in a workout program the BU coaching staff set up.

She also gets to revel in the memorable finish to her scholastic career at Spring-Ford … a finish many student-athletes dream of, but not many achieve.

“She’ll go down as one of the best to come through here,” Hughes said.