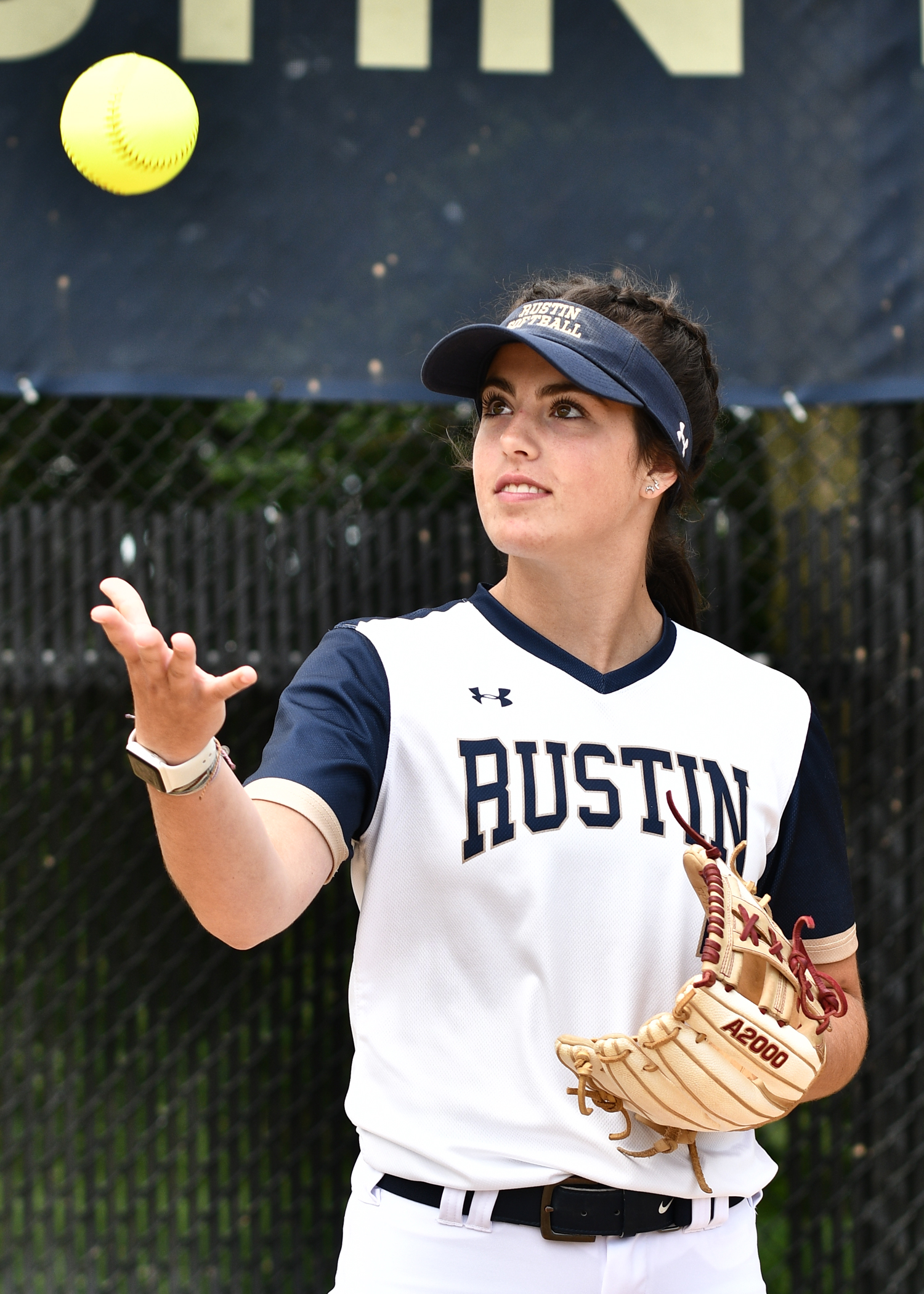 Fricker put together an incredible season, earning sophomore shortstop honors as the Daily Local News Softball Player of the Year.

Anchoring the Rustin infield with incredible defense at shortstop, Fricker keyed the Golden Knights offense with her bat. Fricker notched a county-high 54 hits, nearly twenty better than the next highest total in the area, including 18 for extra bases. Batting .581, Fricker had twelve doubles, three triples and three home runs, scoring 42 runs and knocking in 24 in the process. Impressively, Fricker did not strikeout a single time over the course of the season.

“Kelly is an absolute special player in all facets of the game,” said Rustin coach Dennis Becker. “She is the most polished player I have ever coached in high school. Her work ethic and drive to be the best is second to none.”

Fricker got her start playing tee-ball at age six, first playing in the rec league, Wildfire. At age nine, Fricker got her first taste of travel ball three years later, with Pegasus Fastpitch, then moving on to Chaos at age 13. Fricker is currently a member of the Chaos U-16 national team.

Though softball is her first love, Fricker is an athlete. For the past two years, she’s played volleyball for the Golden Knights, and more recently has gotten into CrossFit.

“CrossFit has been a game changer for me,” said Fricker. “I think if my sister, Rachel, had not introduced me to this sport, I would not be anywhere near the softball player I am today. I had always been a more petite person growing up and I never had the strength to hit the ball over the fence. I was always jealous of the homerun hitters and I wanted to get the strength I needed to do the same.”

The atmosphere and environment surrounding CrossFit is perfect for a well-rounded athlete.

“I joined CrossFit Explode, which is a CrossFit gym located in West Chester,” said Fricker. “I owe so much credit to CrossFit Explode and its community. I have never been a part of a group of people who cared so much about one another and truly wanted to see others succeed.”

But it will always circle back to softball.

“I think my favorite thing about softball is the work ethic you must have to succeed in the sport,” said Fricker. “I also love the team aspect. If you want to succeed, you cannot be selfish in any way. I feel that both of these things are important skills to have in life outside of softball as well.”

As a player, Fricker points to the mental aspects of the game, as both a personal strength, and for what she feels are an underrated part of the sport.

“I think that my greatest strength as a player is the joy I get out of the sport,” said Fricker. “When I am happy on the diamond, I play the best. Any player needs confidence on the field. Softball is such a mental sport, so if you have confidence, you will succeed.”

When asked about a favorite memory from a Rustin season full of big deal games and wins, Fricker’s love for the sports shines through, thinking first of a non-league, late season game that, in the grand scheme of things, didn’t really mean a lot for either team—A Rustin comeback win over visiting Villa Maria.

“My favorite memory from this season would have to be the Villa game,” said Fricker. “Heading into the 7th inning of that game, I could feel the momentum come to our side and I knew we were going to score those runs back. Once we had tied it up in the bottom of the 7th, I knew there wasn’t anything we couldn’t accomplish in the season.”

Including forming bonds that will last a lifetime. “I have been playing with many of the girls on this team for a very long time,” said Fricker. “As a whole, this entire team has made a huge impact on me and will absolutely be one of the most memorable seasons I have ever experienced.”

Fricker doesn’t forget her coaches, either.

“I cannot say enough about Coach Becker and Coach (Nicole) King,” said Fricker “They both care so much about each and every girl on this team, and without that support, we wouldn’t have been able to go as far as we had. As we made it further and further into the season, we grew together and we turned into a family at the end of the season.”

No athlete ever gets far without great support at home, and Fricker gets that in spades from her parents, Steve and Reen. Her father played baseball through college at Millersville, and while her mom didn’t play sports, she has taught valuable life-lessons that carry over to sports.

“Both of my parents have both motivated me to work as hard as I can, but never pressured me to continue something I didn’t like,” said Fricker. “They both continually remind me that if I ever stop loving the sport, it is not worth being unhappy. Mental health comes first. They had the perfect balance of strict and fun while also being two of my best friends. They taught me to first and foremost be a good person and to always be kind to everyone.”

So the 2022 softball season is in the books, but will be long remembered.

“I would just like to thank Rustin softball for the most amazing season ever,” said Fricker. “I also want to thank everyone who has motivated me to work hard and supported me throughout everything I’ve done—my family, my friends, my Rustin and Chaos teammates and coaches, my CrossFit Explode community, and my hitting coach Julia Popovich, I love you all!”