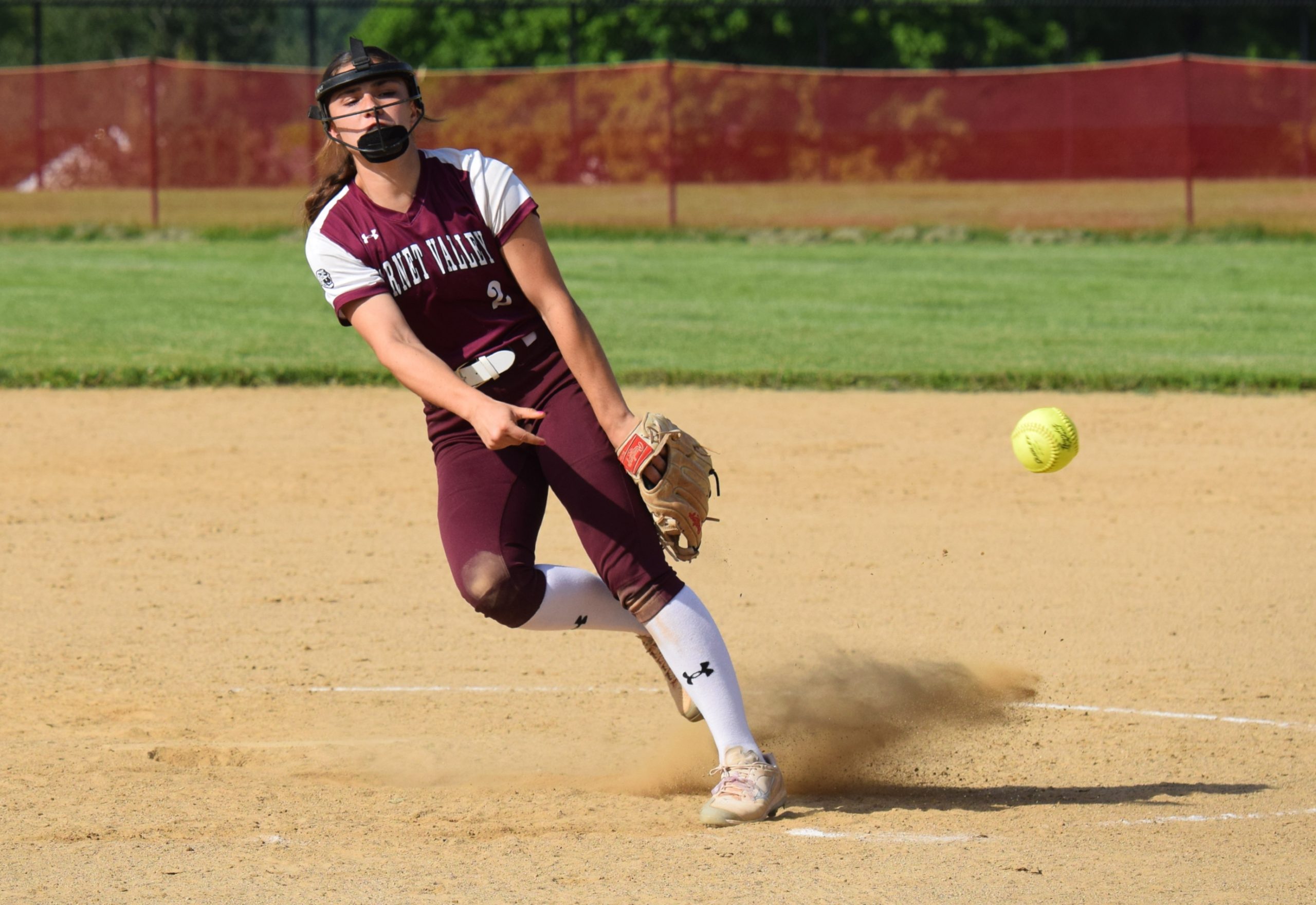 In addition to Daily Times Player of the Year Emma Taylor of Haverford, the All-Delco team includes:

Hayden Sissons, Cardinal O’Hara: The freshman pitcher was a windfall for the Lions. Sissons emerged as one of the top underclassmen in the county, leading the Lions to their first PIAA tournament berth in program history. Sissons had more than 200 strikeouts in 17 games, finishing her rookie year with a 1.35 ERA. Sissons was lethal with the bat, too. She had a .492 batting average, a .536 on-base percentage and an .889 slugging percentage. Sissons finished with seven doubles, six triples and two home runs. Coach Terry Coyne said: “She’s the best player I’ve ever coached.”

Anna Sidlowski, Garnet Valley: The junior pitcher was the MVP of a Jaguars team that reached the PIAA Class 6A tournament. She pitched to a miniscule 0.41 ERA with 201 strikeouts and four no-hitters, including a pair of perfect games. Sidlowski, who is one of the top pitchers in the state, guided the Jaguars to a second-place finish in the Central League. At the dish she slashed .447/.658/1.021 with seven home runs, four doubles, 22 RBIs, 27 walks and 27 runs scored. Haverford third base Kerri McCullum throws out a runner during a state playoff game in 2021. (DFM File)

Kellie Martin, Bonner-Prendergast: The senior shortstop/third baseman was as steady as they come during her four-year varsity tenure. While the Pandas struggled to compete in the Catholic League, Martin was a bright standout. She had a .534 batting average and an .828 slugging percentage, leading the Pandas with 31 hits. She struck out two times in 58 at bats. The All-Catholic League honoree produced two home runs, three triples and 21 RBIs. Martin will continue her playing career at Cabrini.

Annabelle Knese, Haverford: The sophomore first baseman is one of the best young sluggers in the county. As a middle-of-the-order power source for the Central League champion Fords, Knese batted .453 with five doubles, two triples and two home runs. She ranked second on a team that went unbeaten in the regular season in both hits (34) and RBIs (23). Knese posted a .551 on-base percentage and .662 slugging percentage  Knese’s contributions at the plate were a big reason why the Fords dominated the Central League and qualified for the PIAA Class 6A tournament for a second straight year.

Kerri McCallum, Haverford: The senior third baseman was a stalwart and team captain for the Fords each of the last two years. An All-Delco for a second straight season, McCallum was an unanimous selection for first team All-Central League this spring. In leading the Fords to a third consecutive league title, McCallum was first in multiple offensive categories including batting average (.494), hits (38), runs scored (30), doubles (six), on-base percentage (.551) and slugging percentage (.662). McCallum struck out only two times in 77 at bats. She will continue her career at Lock Haven University.

Jada Wade, Notre Dame: The junior shortstop/first baseman is considered one of top college recruits in the area. After verbally committing to UNC-Wilmington in October, Wade had another spectacular year for a rebuilding Notre Dame program that struggled to compete in the excellent Inter-Ac League. Wade batted .500 and led the Irish in runs scored. She is a three-time All-Inter-Ac selection, the first time coming as an eighth grader in 2019. Haley McMenamin, Ridley: The junior infielder was arguably the most productive offensive player in the county. An All-Delco selection for a second year in a row, McMenamin tortured opposing pitchers while playing excellent defense at second base. She slashed a ridiculous .627/.657/1.102 with six homers, six doubles and two triples. She tallied 27 RBIs and 30 runs scored for the Green Raiders, who advanced to the second round of the District 1 Class 6A tournament. McMenamin also had nine walks and 11 stolen bases. Coach Brooke Berger said: “Her numbers speak for themselves. Extremely talented. (Great) power and consistency, ability to drag bunt or slam a home run. Incredible speed and smart baserunning skills. True gamer.” McMenamin is committed to St. Joseph’s.

Brianna Lawson, Sun Valley: The senior shortstop is one of the greatest to ever play for the Vanguards. In only three seasons at the high school level, Lawson amassed 104 hits. This is the second consecutive year she has been named All-Delco. In her senior campaign, Lawson posted an amazing .540/.568/.829 slash line with 41 hits in only 20 games. She was a doubles machine (14) and crushed two homers to go with 26 runs scored and 24 RBIs. Lawson did most of her damage against difficult Class 6A competition in the Ches-Mont League. Lawson was named to the All-Ches-Mont League American Division first team. She led a two-win program in 2021 to eight victories in 2022, one shy of qualifying for the District 1 Class 5A playoffs. Lawson will continue her career at Division I Monmouth.

Brianna Kelly, Marple Newtown: The senior center fielder was the best at her position in the county. A first-time All-Delco selection, Kelly was the catalyst of a Marple team that came one win shy of qualifying for the PIAA Class 5A tournament for a second year in a row. She posted a .414 batting average with five doubles, two home runs, 13 RBIs and 27 runs scored. She was a runaway selection for first-team All-Central League.

Cardinal O’Hara freshman pitcher Hayden Sissons uncorks a pitch in a game against Oxford in the first round of the PIAA Class 5A playoffs. (Pete Bannan/MediaNews Group)

Riley Signor, Penncrest: The sophomore catcher was hands down the top performer at her position in 2022. A nationally ranked catcher, Signor was the backbone of a Lions program that advanced to the District 1 Class 5A playoffs. Signor had success off all the top pitchers in the area, including a home run off Emma Taylor of Haverford. The All-Central League honoree finished with a .469 batting average, a .541 on-base percentage and 1.000 slugging percentage. Signor belted nine homers with 23 RBIs and was stellar with her defense behind the plate. Signor also blasted an out-of-the-park home run in Delaware County’s only win at the Carpenter Cup Classic earlier this month.

Paige McLaughlin, Ridley: The junior catcher thrived at the plate and behind the dish on the way to earning All-Central League recognition. McLaughlin slashed .466/.508/.845 with five homers, six doubles and two triples. She collected 26 RBIs and scored 22 runs. Would-be base stealers were picked off nine times against her. Coach Brooke Berger lauded McLaughlin for being a “leader on the field (with a) cannon arm and lots of power in her swing.”

Hanna Mae Legaspi, Episcopal Academy: The freshman enjoyed an incredible season as both a shortstop and catcher for the Churchwomen, who captured a share of the Inter-Ac League title. Legaspi posted a .372 batting average and .595 slugging percentage with seven doubles, seven stolen bases and 12 runs scored. She ranked 53rd in the Top 100 Elite Players in Pennsylvania, according to Extra Innings. Legaspi was also named the All-Inter-Ac League first team as a ninth grader.