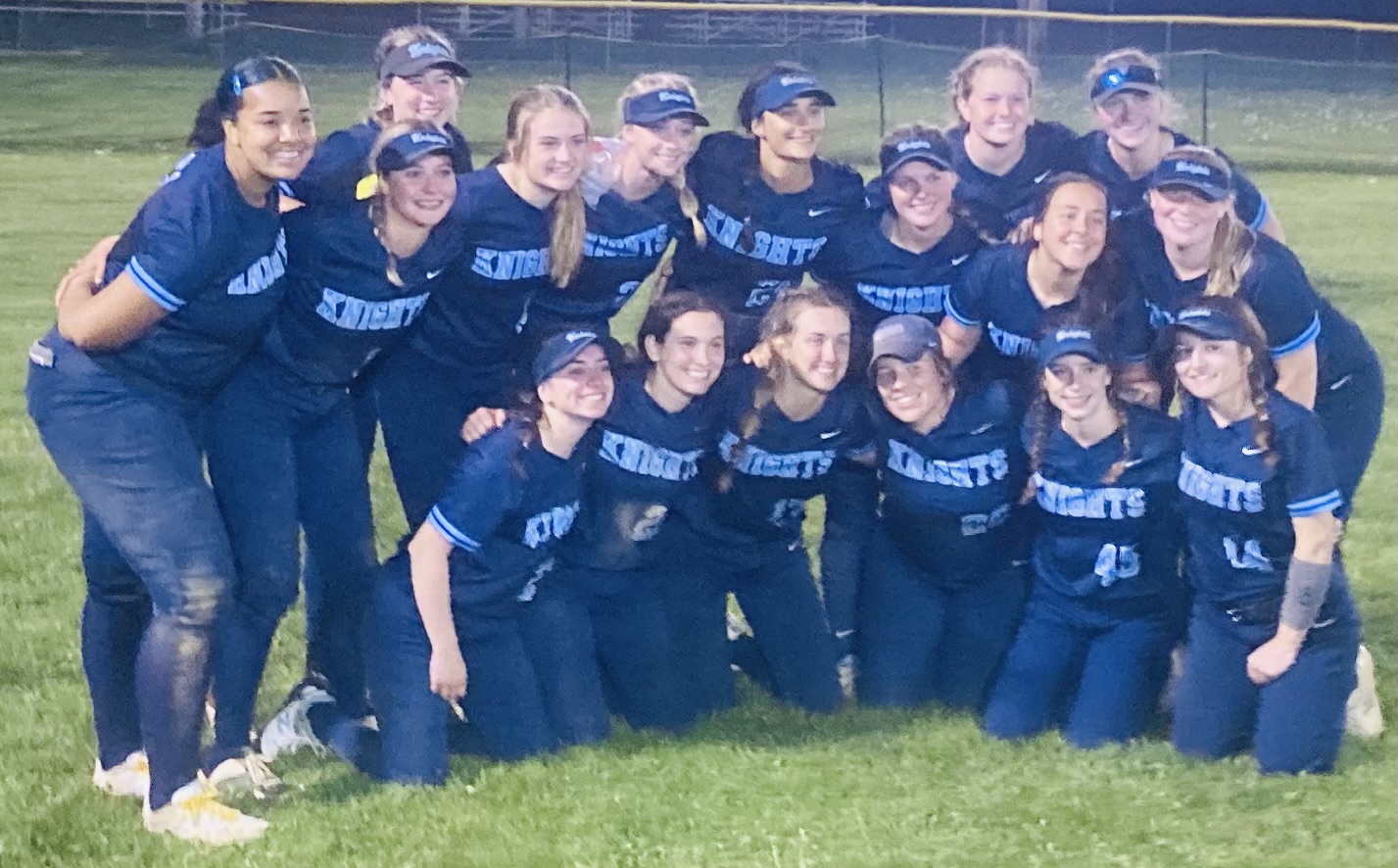 North Penn wrapped up the SOL Colonial title with a win over Pennridge on Thursday, May 5, 2022. Kev Hunter, MediaNews.

SELLERSVILLE >> In a season filled with victories, what fortified North Penn’s drive was how it responded after its only loss.

“After the loss to Pennsbury, the girls came back to me and said ‘coach, we got this. We’re not gonna let that happen again,'” said Knights coach Rick Torresani. “They realized how good they can be if they play their game. It was amazing, because I never had a team say that before.”

The defending PIAA-6A State Champs have scored a whopping 51 runs in their last three games since that lone defeat. On Thursday night at Druckenmiller Park, following an 18-0 over Central Bucks West earlier in the day, North Penn earned a 15-0 win over rival Pennridge to wrap up the Suburban One League Colonial Division, NP’s sixth division title in the past seven years.

“It feels so good. We worked so hard for it and for all of our hard work to pay off feels amazing,” said North Penn’s Sophia Collins, who smashed two home runs in the victory. “We were trying to come back strong after our loss to Pennsbury, and we came back full force.” The win raised North Penn’s record to 15-1 (11-1 Colonial), with a game at Quakertown up next on Monday. Pennridge (7-8, 5-8 Colonial), still in the District 1-6A playoff hunt, hosts Central Bucks West Tuesday.

“I think the girls battled much better than the first time we faced North Penn,” said Rams coach Wendy Iadonisi. “We have five games left and if we stay consistent through those game, we have a good chance of making it in (to the playoffs).”

Julia Shearer was in control for NP, allowing just two hits in her complete-game victory. She struck out 13 in the shutout win. The Knights’ bats went to work right away, with an RBI double by Gianna Cimino opening the scoring in the first.

Collins and Maddy Gronback, hitting sixth and seventh for NP, drove in runs in the third, making it 3-0 Knights.

“The lineup was great last year too and we only lost four people, so it’s basically the same lineup and we’re stacked from top to bottom,” said Collins, who went 4-for-5 with three runs and four RBI.

The Knights added three runs to their lead in the fourth and then broke it open further in the sixth. North Penn huddles after its win over Pennridge on Thursday, May 5, 2022. Kev Hunter, MediaNews.

Back-to-back home runs by Cimino, who also belted two doubles, and Collins widened the gap to 9-0. Collins homered again in the very next inning, a two-run shot, and it was 12-0 Knights.

“It feels great, especially because I had been struggling a little bit,” said Collins. “So to come back and do well hitting and help the team feels amazing.

Said Torresani: “Sophia had a great game. She plays great defense (at short), If she gets on fire and hits, with the way the top of the order has been hitting, look out.”

Shearer, who bats leadoff for the Knights, drove in a pair to cap the scoring. Pennridge huddles after its game with North Penn on Thursday, May 5, 2022. Kev Hunter, MediaNews.

Catelyn Thrush and Katie Buccafuri had the two hits for the Rams.

Pennridge had lost its ace pitcher, Grace Helbling, for the season but she hopes to make a return for her senior year next spring. Averi Dockery got the start for the Rams Thursday night and battled into the sixth.

“We moved everybody up in the lineup – we have Averi batting fourth, and the girls have answered,” Iadonisi said. “The last few games, we’ve been hitting very consistently through the lineup so the girls have really stepped up with the loss of Grace.”