Softball: Stuck gets Haverford lineup moving in rout of Ridley 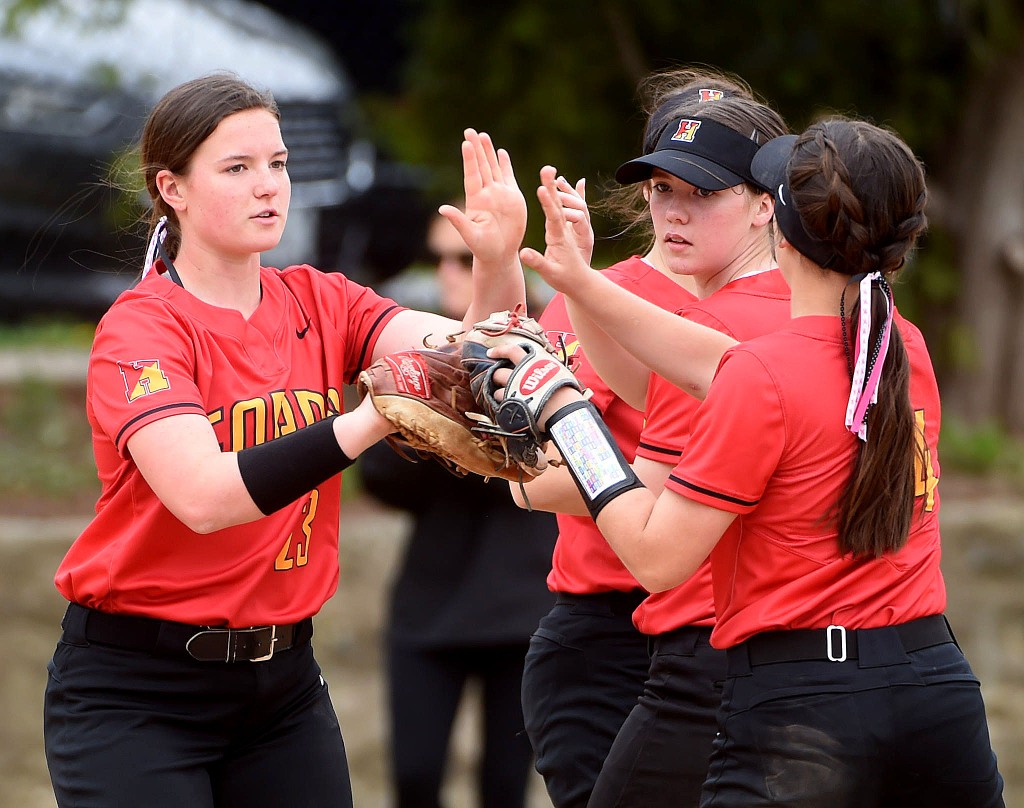 Haverford pitcher Emma Taylor, left, being congratulated by teammates in a game last month, pitched her way to a 13-3 rout over Ridley Thursday. (Pete Bannan/MediaNews Group).

Hitting at the bottom of a stacked Fords lineup, Stuck is often called upon to drop a sacrifice bunt or do something selfless to help the team.

But Stuck found herself in a prime spot Thursday afternoon at Ridley. With the bases loaded, she had the opportunity to break the game open in the third inning.

Stuck smacked a single back up the middle, driving home Megan Kent and Kylie Ingram to put the Fords up five. Haverford would plate six runs in the frame on the way to a 13-3 victory over Ridley in six innings.

“It made me a lot more relaxed and I think it made everyone else excited, to start the inning off like that and keep everyone going,” said Stuck, who scored two runs and stole a base. “Every game is getting bigger and bigger. We were really excited to play them again and to get that much closer to winning the Central League.”

Haverford (15-0) remains all alone in first place. Ridley (11-4) had won 11 straight decisions and was coming off a thrilling 2-1 victory over Garnet Valley Tuesday. With Thursday’s win, the Fords can clinch at least a share of the Central League crown if they can handle second-place Garnet Valley on the road next Monday.

After Stuck’s clutch single, Shannon Gavigan delivered run-scoring hit and Keri McCallum was plunked by a pitch to load the bases. Kelsie Checchini relieved Ridley starting pitcher Jolie Torrens and was greeted immediately by Emma Taylor. The senior ace and reigning Daily Times Player of the Year made contact with a ball low and out of the zone … and it sure went far. The ball sailed over the mesh fencing in left field for a grand slam as the Fords expanded their cushion to 9-0.

Gavigan was the table setter at the top of the order. The slick-fielding shortstop finished 3-for-4 with an RBI and two runs scored.

“We are definitely hitting the ball well,” Gavigan said. “If the top of the lineup is struggling, we know the bottom always comes through and vice versa. I feel we can always count on each other.

Stuck’s two-run knock made life easier for Gavigan and the big bats in the Haverford order.

“Once she got that hit, everybody sort of was, like, ‘OK, now we have the momentum.'” Gavigan said.

The Fords churned out 15 hits. Annabelle Knese was 3-for-4. Ingram had a pair of singles. McCallum singled and scored twice, and Jess Rosen had an RBI single off the bench.

Paige McLaughlin smashed an RBI double to put the Green Raiders on the board in the fourth inning. She also had a single and scored two runs. Mary DelFera had a hit and two RBIs.

Marple Newtown 11, Strath Haven 0 >> Freshman catcher Grace Corner homered twice and drove in four runs to power the Tigers. Shauna Kerrigan was 3-for-3 with a double and an RBI.

Springfield 11, Harriton 3 >> Hope Priemon was 3-for-4 with a double, triple and three runs scored for the Cougars. Cara Utter had three hits, including a double, and Ava Craddock was 2-for-3 with an RBI. Ally Heston belted a home run and winning pitcher Amaya Hartung recorded 11 strikeouts.

Archbishop Wood 2, Cardinal O’Hara 1 >> The Lions lost a heartbreaker in 10 innings despite a sensational 21-strikeout performance by freshman Hayden Sissons, who allowed only three hits.