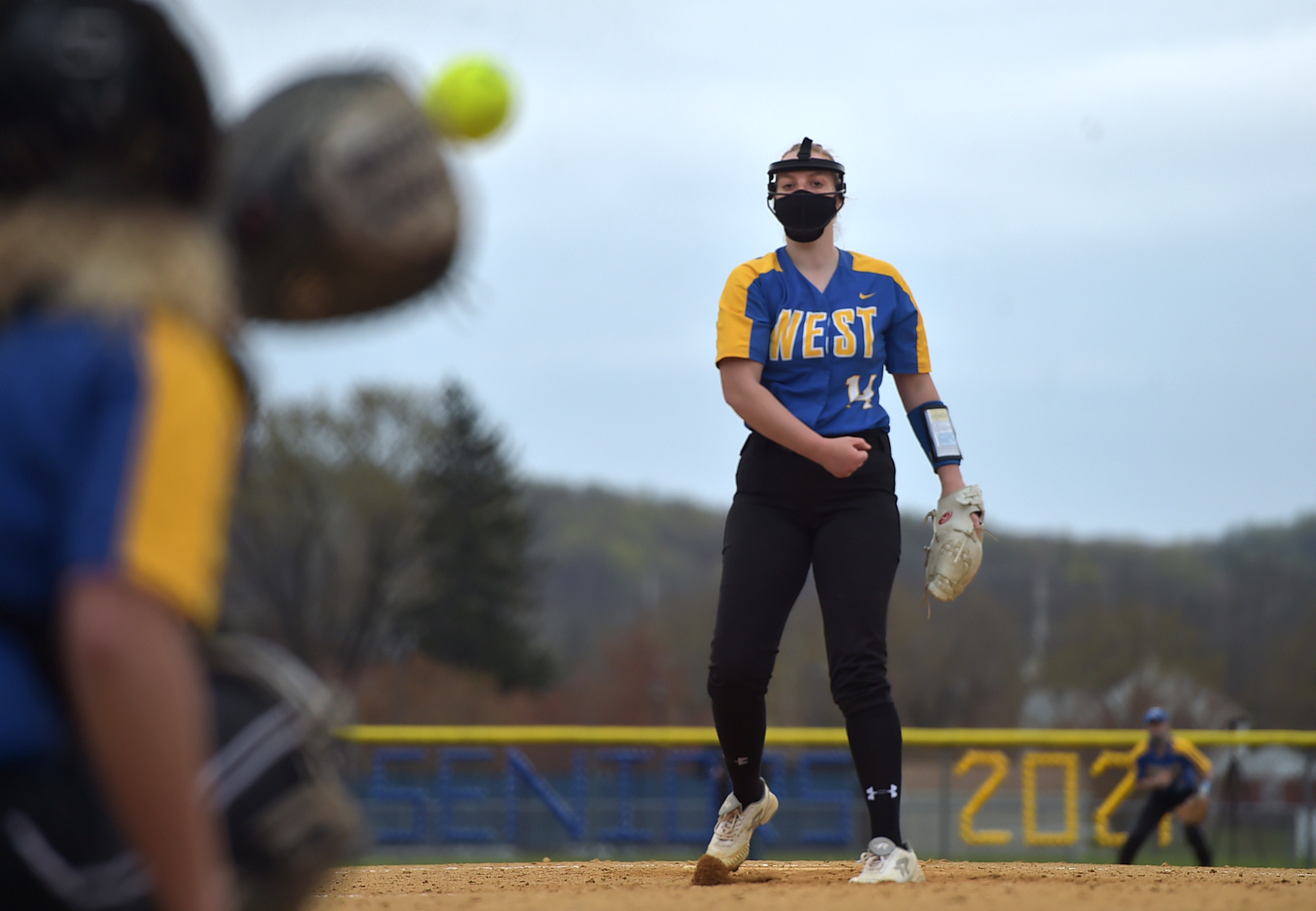 Downingtown West’s Meghan Sinkus scores the winning run against Kennett Friday afternoon. The Whippets went on to a 5-1 victory .

Downingtown West’s Meghan Sinkus connects for a single against Kennet Friday afternoon at home. She stole two bases and scored the winning run.

The Whippets (4-0) manufactured five runs on only five hits, and stole nine bases against Kennett (2-1). In the first inning, the Whippets worked some deep counts and forced Kennett’s fine pitcher Genevieve Ebaugh to throw 34 pitches in that frame. In the third inning, D-West used a couple of infield hits and four stolen bases to plate two runs.

“Our hitters are looking for a good pitch to hit; if it’s not there, they have good discipline,” said D-West head coach Joe Germani. “We’ve been seeing the ball really well this week.”

After opening its season with a 10-1 win against Sun Valley March 30, Downingtown West scored a 19-1 victory against West Chester Henderson Monday and got a 19-3 win against Avon Grove Wednesday.

“We had to do the little things today instead of what we did the previous two [games],” said Germani. “We’re as fast as we need to be; it’s a fun offense.”

In the bottom of the first inning, Whippet senior third baseman Taylor Posner led off with a triple to right field. With one out, Morgan DeFreitas came to the plate, saw 11 pitches (many of which she fouled off) and lined a single past second base to score Posner.

Posner, who will be playing softball for Syracuse University next fall, said, “I think we have very good sticks [bats] this year, we have a very good offense, and everyone is very selective. We all jell pretty well – if I were to go in [to the bench] and tell my teammates, ‘She’s throwing this,’ or, ‘this is happening at the pate,’ they’ll listen to you and go up there and crush the ball.”

In the bottom of the third inning, with one out, Whippet center fielder Meghan Sinkus beat out an infield hit, then stole second base. DeFreitas also reached first on an infield grounder. Riley Smith, running for DeFreitas, stole second base and Sinkus scored on a double steal. Smith then stole third, and later scored on left fielder Lizzie Kern’s ground out to second to give the hosts a 3-0 lead.

Ebaugh led off the fourth frame with a single to left, then a D-West infield error put runners on first and second with no outs. Ella Schaub’s sacrifice bunt advanced the runners, and with Blue Demons on second and third and one out, Wright retired the next two batters on a strikeout and a ground out to first.

With two out in the bottom of the fourth, D-West senior first baseman Emily Byrne lined a triple to right center. She scored a few pitches later on a wild pitch, diving head first into home plate to give the hosts a 4-0 lead.

In the bottom of the fifth inning, Posner was hit by a pitch, then stole second base and third base. DeFreitas lined a hard single to center, scoring Posner to make it 5-0.

In the top of the sixth, Slicer lashed a triple to right with one out, then scored one out later to put the Blue Demons on the scoreboard.

Wright closed the game in style, striking out the final two Kennett batters in the top of the seventh inning. She allowed only five hits and no walks, striking out 11 batters for a complete-game victory.

“My curveball and my screwball were working really well today, but I couldn’t have done it without my defense,” said Wright, who will be playing softball for Gettysburg College next fall. “I have a lot of trust in our outfield and infield, and they all did really well. Kennett has some good hitters on their team, and they hit the ball pretty hard too, so it wasn’t just me, it was our whole team. We also have a very selective group of hitters, everybody can hit the ball up and down the lineup, and I have a lot of trust in them too.”

Like her senior teammates, Wright is happy to be playing softball for Downingtown West this spring after missing her junior season due to the COVID-19 pandemic.

“It’s great to be out here this season, because missing last year was huge for all of us, and nobody wanted to miss another season,” said Wright.

Posner said, “It’s a relief to finally be out here again, because I was scared we wouldn’t have a softball season this spring with everything going on. When we shut down last spring, it was upsetting, but we got to come out this spring and do all the fun things we do, playing together – it’s good, it’s really exciting.”

For Kennett, Ebaugh allowed only five hits by the powerful Downingtown West lineup, and struck out 13 batters. In the bottom of the sixth, she struck out the side. She was a two-way performer Friday, going 2-for-3 in the No. 3 batting slot.

Kennett head coach Lauren Gottstein noted, “Brooke Underwood, who was a shortstop, is now our catcher, and has been working really hard [at catching]. Hannah Slicer, our cleanup hitter, has been a big bat for us.”