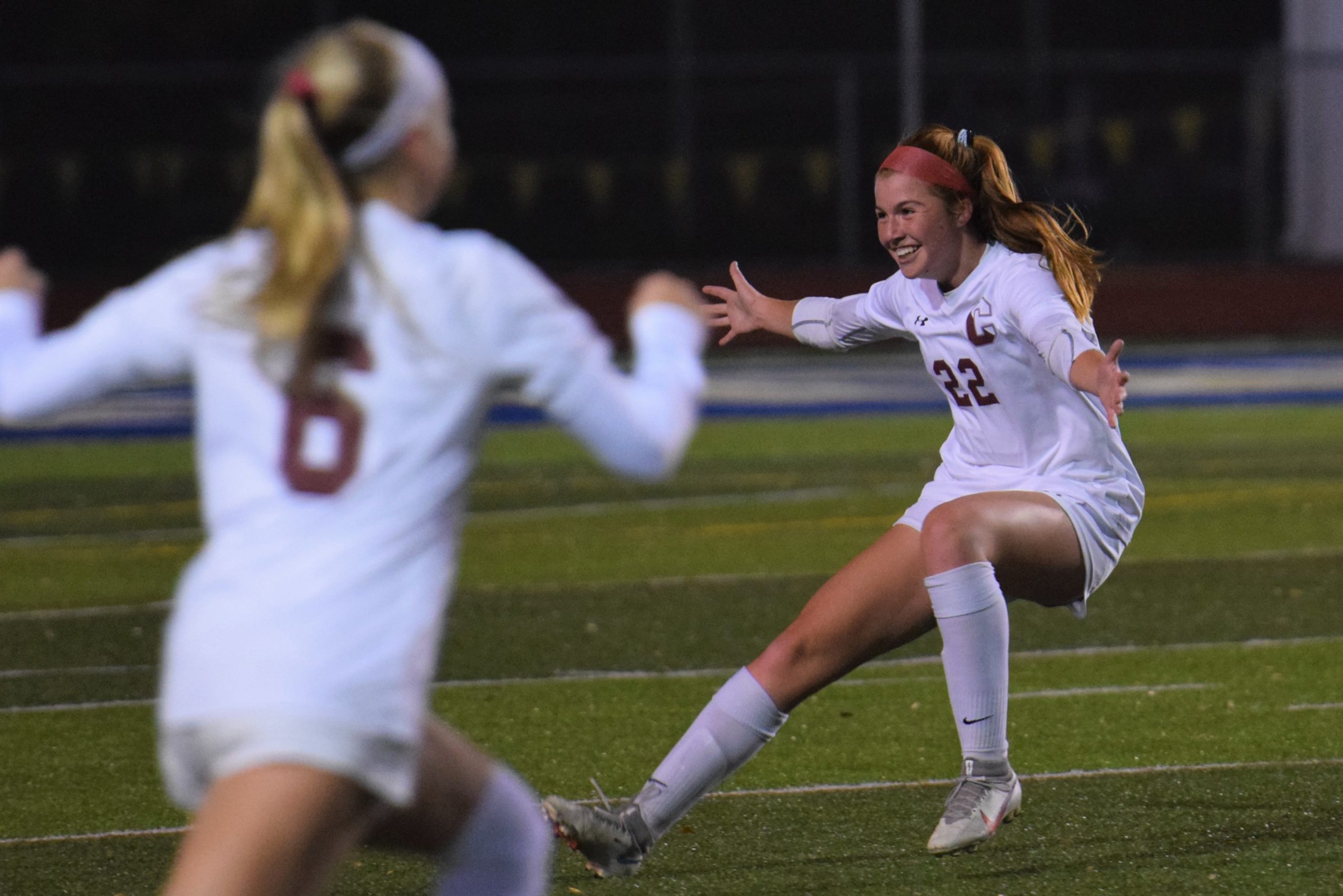 Conestoga's Sadie Bell (22) awaits the hugs of teammates after a 1-0 win over Downingtown East in a PIAA 4A semifinal Tuesday night at Spring-Ford. (Austin Hertzog - MediaNews Group)

ROYERSFORD >> You would expect a PIAA 4A girls soccer semifinal to be played differently than a regular season game in September. Such it was between Conestoga and Downingtown East. Their first meeting saw five goals between the two teams, but on a clear, chilly Tuesday, one was enough.

Abagail Klebe scored in the first half and the defense made it stand up as Conestoga edged Downingtown East, 1-0, at Coach McNelly Stadium at Spring-Ford High School.

“It was kind of what I expected,” said Conestoga coach Ben Wilson. “I knew it wasn’t going to be a blowout for either team. It was going to be a close game. We had to try and score an early goal and be disciplined and work and make sure we kept the result.” Conestoga’s Abby Klebe (30), the game’s lone goal scorer, and Sadie Bell (22) smile as they leave the field after a 1-0 win over Downingtown East in a PIAA 4A semifinal Tuesday night at Spring-Ford. (Austin Hertzog – MediaNews Group)

The Pioneers (18-4-2) reached the finals for the second time in three years. They will take on District 7 champion Moon at Hersheypark Stadium at 4 p.m. on Friday.

“We’re so excited,” said Klebe. “We worked so hard this season, and there’s a lot of ups-and-downs, but we’re so ready. We’re ready to win a state championship.” Conestoga’s Allison Kleppe gets a touch on the ball ahead of Downingtown East’s Nicole Prendergast during a PIAA 4A semifinal Tuesday night at Spring-Ford. (Austin Hertzog – MediaNews Group)

The first half was played on even terms for the first 20 minutes. Downingtown East had a decent spell of possession, but was unable to pose a danger in front of goalie Catherine Steege.

The breakthrough came with 16:12 left. Klebe gathered in a long pass along the ground, made a move to get some space from her defender, turned and fired a low shot past East goalie Lillian Motte and inside the left post to put ‘Stoga up.

“I guess I was in the right place at the right time,” said Klebe. “There was an amazing ball played right down the middle and it slipped by the defense. I tried to keep calm and take a touch and place it instead of launching it.” While Downingtown East pressed, the Pioneers defense stayed resolute and it remained 1-0 going into the break.

The Cougars should’ve been the more desperate team in the second 40 minutes, but that didn’t translate into opportunities. The Pioneers had a 7-3 shot advantage and did not allow East a shot until the midway point of the half.

Conestoga’s backline stymied the Cougars’ attack and the offense held possession enough to blunt East as the clock became friendlier and friendlier.

“As we got into playoffs, it’s really our backline, our holding midfielders and our goalkeeper that has really made us safe in games,” said Wilson. “They don’t have to worry about giving up goals because we’ve been so safe in the back.” The defense snuffed out one final East attack as the horn sounded and the Cougars’ place in Hershey was booked.

“It was so stressful the entire game. The goal was early, so we just spent the rest of the game on the edge of our seats so nervous trying to keep that score up,” said Klebe.