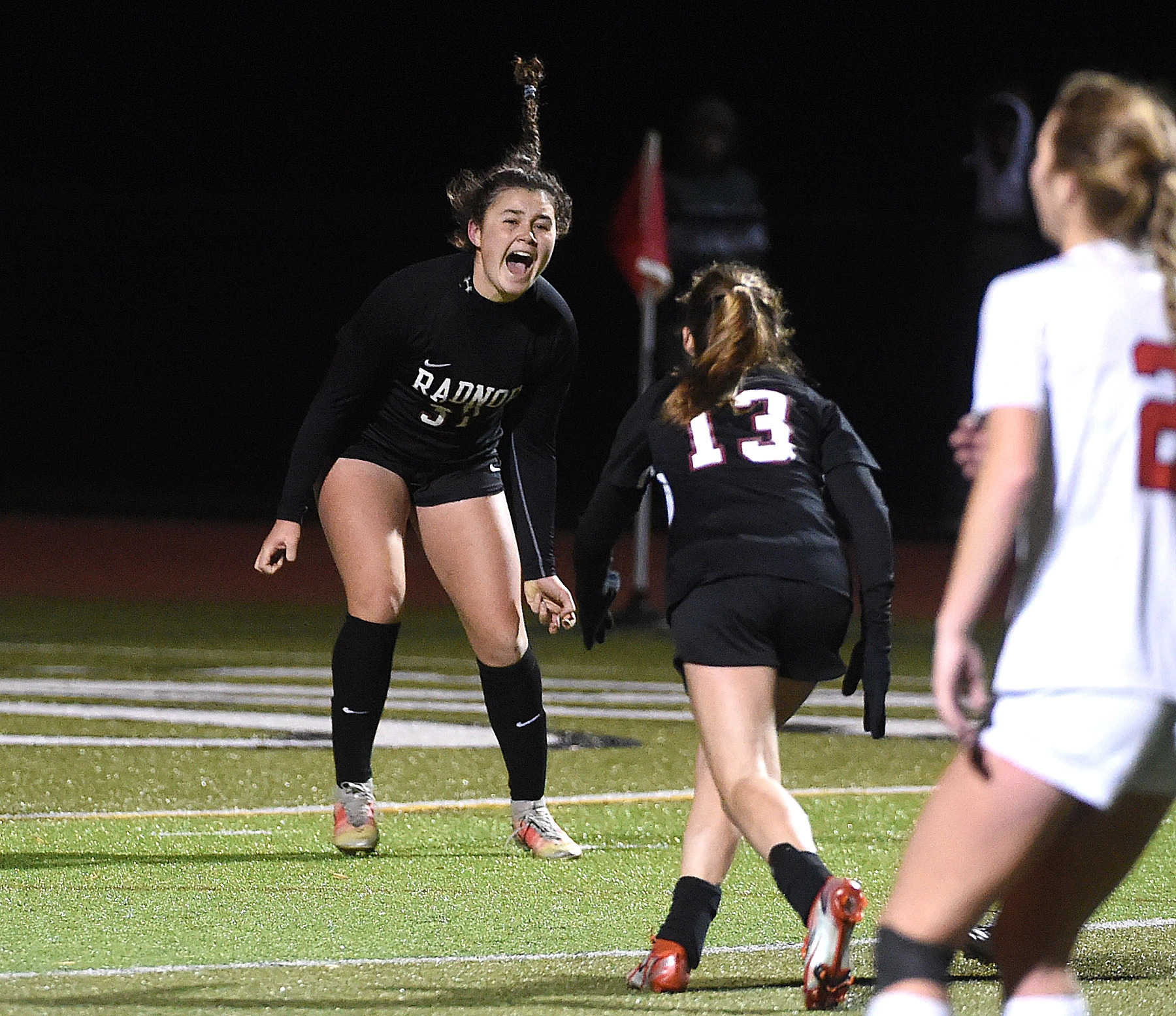 WORCESTER TWP. — Kate Boujoukos strode into the penalty area Tuesday with plenty on her mind.

It wasn’t a singular focus that compelled the Radnor midfielder forward late in a tie game. It wasn’t the tunnel-visioned, zoned-in view that shut all else out.

Instead, Boujoukos carried the pressure of the moment with pride.

“I knew those were the last moments of the game,” Boujoukos said, “and I knew if I wanted to play again with my team, because I love all the girls on my team, I had to finish in that moment.”

Ever one to embrace the pressure, Boujoukos delivered.

Her goal with 2:46 left in regulation was her second of the night, the game-winner in a 2-1 victory for the District 1 champion over Archbishop Ryan in the PIAA Class 3A semifinals at Methacton.

Radnor (20-4) moves to the state final, its first foray this deep since the program won it all in 1999. It’s also another late escape for the Raptors, who needed a 78th-minute penalty from Emily Daiutolo in the quarterfinal against Northwestern Lehigh to set up Ivy Chaskelson’s double-OT clincher. Boujoukos had opened the scoring in the 16th minute. A rampant effort from Ryan after the break, though, got the District 12 champs deservingly back on level terms via Rebecca Dalton in the 55th.

But Radnor managed to even out play. Making steady progress down the right wing via Selah Koleth, the ball filtered to right back Julie Breedveld in the 77th. She played a hopeful ball into a dangerous area that Chaskelson, the freshman forward who’s played hero each of the last two games, brought down and navigated around her marker. She poked it to her right, into the run of Boujoukos, the physical center midfielder who’d made daring runs into the box all night.

Boujoukos took a touch in traffic and fired a right-footed shot back across the grain, leaving goalie Alana Verello to merely flap at its vapor trail.

The first goal was even more technically challenging, Boujoukos finding a seam as Ryan tried to raise its back line after a corner. Sydney O’Shea’s ball from right back bounced into that space, and Boujoukos executed a superb volley that flew over the onrushing Verello and dipped magnificently into the net.

“I’m not really normally good at volleys,” Boujoukos said. “I used to be pretty bad at them. But my dad used to take me out and we’d practice shots like that. I saw that there was a wide open space in the middle, so I just timed it right. I didn’t see the goalie if she was running out or anything, so I just kind of hit it at the first chance I got.”

After a great save on Rivera, Toomey smothers a corner. Ryan pushing hard pic.twitter.com/v055xRF0qZ

“I’m always looking for the ball out wide because I’m typically left wide open. Teams don’t usually think about the outside backs pushing up as much as I do,” O’Shea said. “So I’m always looking to cross the ball to the far post. This time, it went to the middle of the 18. But I can always count on someone being there and pressuring the ball, and I saw Bouj wide open.”

Ryan adjusted beautifully in an entertaining game between sides that played quality, attractive soccer. Where Radnor controlled play early, Ryan coach Scarlett Walsh shifted numbers into the Ragdolls’ midfield to shift the balance. The result was one-way traffic for 15 minutes leading up to Dalton’s goal. Most if it depended on Gianna Rivera, the tricky forward who bedeviled the Radnor backline. The gravity Rivera exerted on Radnor’s defense opened the chasm that Dalton ran into in the 55th, with midfielder Chelsea Ritter hitting a beautiful line-splitter that carved the defense. Dalton took a touch past the center back and dinked a shot over Mallory Toomey as she rushed off her line.

“I was getting the ball and I saw Gianna was making that run out wide and she drew those two players out wide,” Ritter said. “That opened up the space for Rebecca to come in, and I just played that early through ball in and she was able to get it and finish it.”

Radnor didn’t force Verello to make her first save until the 68th when Koleth, who created a bucket of chances with her high pressure, had a golden chance near the penalty spot. But the sophomore’s finish was right at the goalie.

Toomey was active in making five saves, charging off her line to get both hands to a Dalton effort in the 41st as the forward kicked it into her abdomen. Rivera pulled a shot inches wide after beating a defender and Toomey on the left in the 70th, then Dalton spurned a chance a minute later. Boujoukos had a goal-bound header blocked off a corner in the 73rd preceding Koleth’s shot.

But given one more look at goal to keep Radnor’s remarkable run alive, Boujoukos wouldn’t miss.

“I think it means the world to every single girl on this team,” Boujoukos said. “We’re such a close group of girls this year and everyone loves each other and everyone wants the best for each other. We want to get as far as we possibly can, and this year, that’s states. We want that state title.”