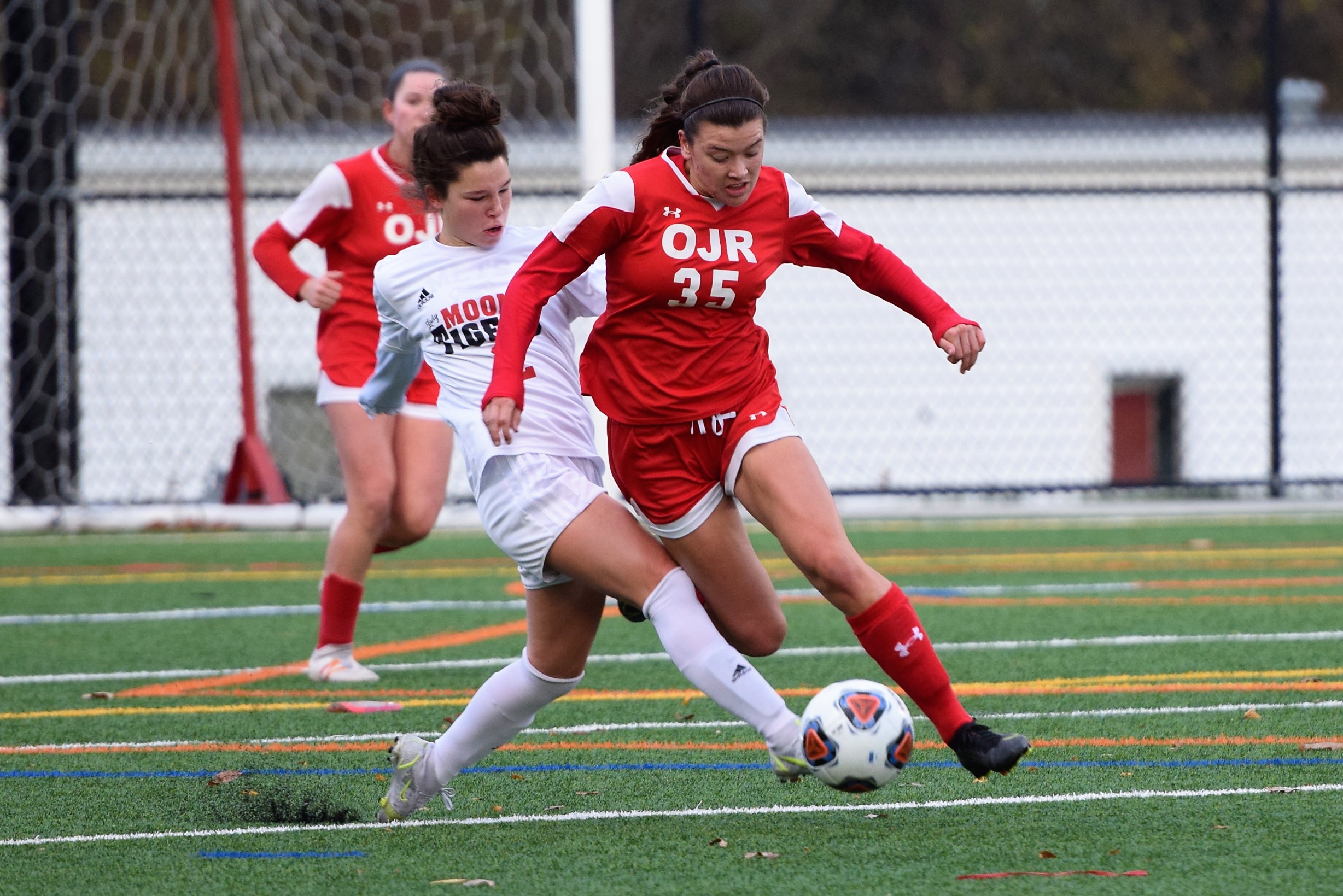 NEW KINGSTON >> The scouting report said there would be slim margins between the Owen J. Roberts and Moon Township girls soccer teams.

The Wildcats and Tigers both knew why: facing off would be like looking in the mirror.

“We saw some film of them and I thought they were a mirror image,” said Moon head coach Bill Pfeifer. “I thought the midfielders were the strength of both teams, some flank play where you could have some success and defensively neither team gives up goals.”

Like most postseason games with evenly-matched teams, the game was decided by a set piece.

Junior midfielder Kayla Leseck headed in Marina Mollica’s corner kick early in the second half and the Tigers midfield and defense took care of the rest as Moon defeated Owen J. Roberts 1-0 in a PIAA Class 4A quarterfinal Saturday at Cumberland Valley.

The Wildcats fell two wins short of the ultimate goal that would have ended in Hershey.

“Those last 10 seconds I was just saying ‘no’ to myself because I didn’t want it to be over,” said OJR senior captain and defender Morgan Weaver. “These girls are my family. We’ve worked for six months now to get where we are. We just needed one more week.”

Weaver was disappointed with the result, but not the performance from the Wildcats.

“I’m so proud of how we played,” she said. “They’re a good team, very aggressive. We got tired at the end but we were still fighting to the last moment. It was amazing to be out there with them.”

“Give credit to Moon,” said OJR coach Margusity. “Their physicality stunned us and we didn’t have the first half we usually have, especially the first 10 minutes. We usually come out creating chances early.”

“At this level, everybody has a superstar, everybody has a good goalkeeper, and there is a reason why they are a state quaterfinalist. The talent level is going to be right there with yours. I don’t think they executed better than us and both teams made a lot of ebb and flows to the game, but they finished that corner chance off and that was the difference in the game.”

The leadup to the game was suboptimal for both teams due to an OJR busing issue that led to the team arriving at 2:17 p.m. – 17 minutes after the game’s original start time.

“I was really pleased with the composure of the kids,” said Moon’s Pfeifer. “We had some adversity at the beginning where they showed up late and we warmed up, then cooled down, warm up again, then told we aren’t allowed on the field. Everything was disrupted. There were so many distractions but they handled it very well.”

Meanwhile, it was a nervy trip for the Wildcats beyond the usual anticipation of a big game.
“On the way here we were all a little stressed. We knew we’d only have 30 minutes once the bus was seen so that was a little stressful,” Weaver said. “But as soon as the whistle blew it was game time and we were ready.”

While Moon bossed the first half and pinned OJR back, the defense of Weaver, junior Rachel Sbei, freshman Ashly White, senior Caligh Bold and junior goalkeeper Colby Wasson limited the quality of chances.

The second half started more of the same until Moon’s big moment: with 34:54 on the clock, sophomore Mollica served a corner toward the back post and Leseck rose to meet it for the deciding goal.

“When you get to this point in the season it usually comes down to a set piece to determine the outcome of the game,” Pfeifer said.

Wasson (6 saves) made a strong tip save of a Leseck free kick with 27 minutes remaining to keep it a one-goal game.

OJR managed its best scoring chances after going down on a breakaway for junior Alexa Vogelman with 33 minutes to play, a long-range Vogelman effort with 15 left and its best late chance on a charging free kick from Weaver with 1:49 left. But Moon goalkeeper Serayah Leech (4 saves) was up to the job.