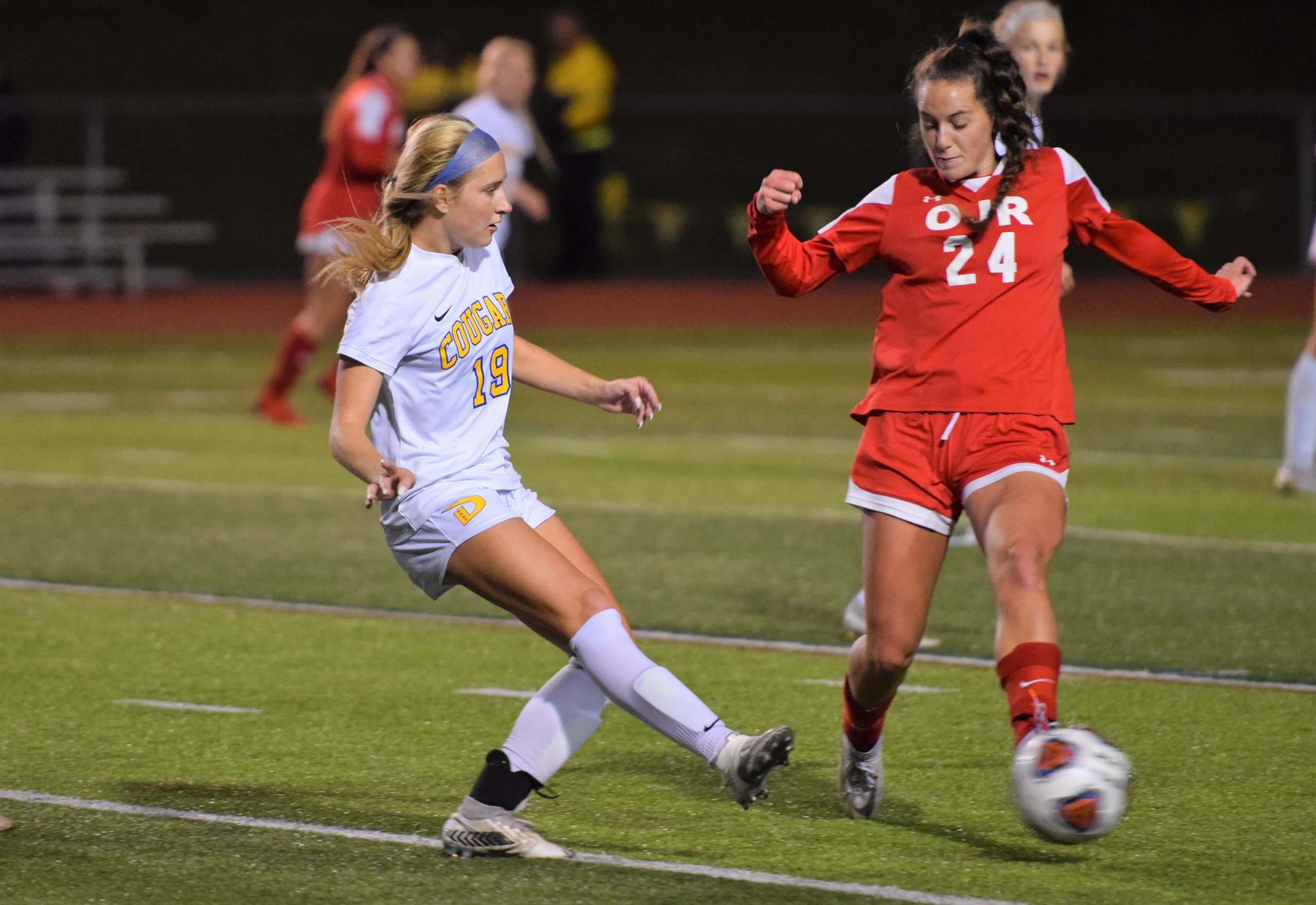 Royersford >> There may be a real debate about what was more smothering Saturday, the weather or the Downingtown East defense.

The Cougars threw a (cold, wet) blanket over Nazareth and a late first-half goal sent them on their way to a 2-0 victory over Nazareth in the PIAA girls soccer 4A quarterfinals at Coach McNelly Stadium at Spring-Ford High School.

Downingtown East (20-3-1) advances to the semifinals on Tuesday where a familiar foe awaits, Conestoga. The Pioneers defeated the Cougars, 3-2, back on Sept. 25.

“We did lose to Conestoga in the regular season, but we thought that was one of our best games of the season, so hopefully we can get revenge,” said Madison Shumate.

East came out strong in the first half, they looked the more dangerous side, with Caroline McDonald making a couple of marauding runs down the right side that forced Nazareth goalie Kelly Leszynski into a couple of early saves. She finished with five stops in the half and nine overall.

Despite controlling possession, the Cougars failed to link up with the final pass as the ball skipped away on the wet turf.

With both teams looking forward to the halftime talk, East struck. Shumate controlled a long pass and made a move to right, turned and shot to the left, the ball slipped past Leszynski and into the bottom corner for a 1-0 advantage.

“I saw there was an opening and I took my touch and I was able to buty it in the back of the net,” said Shumate. Lauren’s (Reimold) ball was great. It went through half the defense and gave me the opportunity.”

East outshot Nazareth, 9-0, in the half. The Blue Eagles (18-3-1) and leading scorer Kayley Hynes were never able to get untracked and get a toehold into the game.

“We knew coming in that number 8 (Hynes) was a really good player who plays all over the field, so we wanted to make sure we were stagger and covering for each as they were playing long balls over our heads,” said senior co-captain Nicole Prendergast.” We done a really good job season about knowing when to step (up) and knowing where each other is.”

Nazareth got some better of the play in second half, but couldn’t turn those chances into goals. Their best chance, however, didn’t even turn into a shot. A mistake in the back allowed Hynes to break in on goal. But, Gabriella Kobell tracked Hynes and knocked the ball away without allowing a shot.

A pall did come over the game with 14 minutes after Nazareth’s Skyler Jordan fell awkwardly and required an ambulance to take her away.

The Cougars put the game away later as a cross from Kylie Shumate was deflected by a defender into the net.

“Considering the weather conditions where it was cold, rainy and the wind was blowing hard across the field, I thought our girls played actual game of soccer in the first half, which was nice,” said East coach Jason Luzak. “They were moving the ball nicely despite the bad conditions. That goal at the end of the half said hey, we can put it away here and win this game.”