Truth in the youth for Pennridge girls soccer team 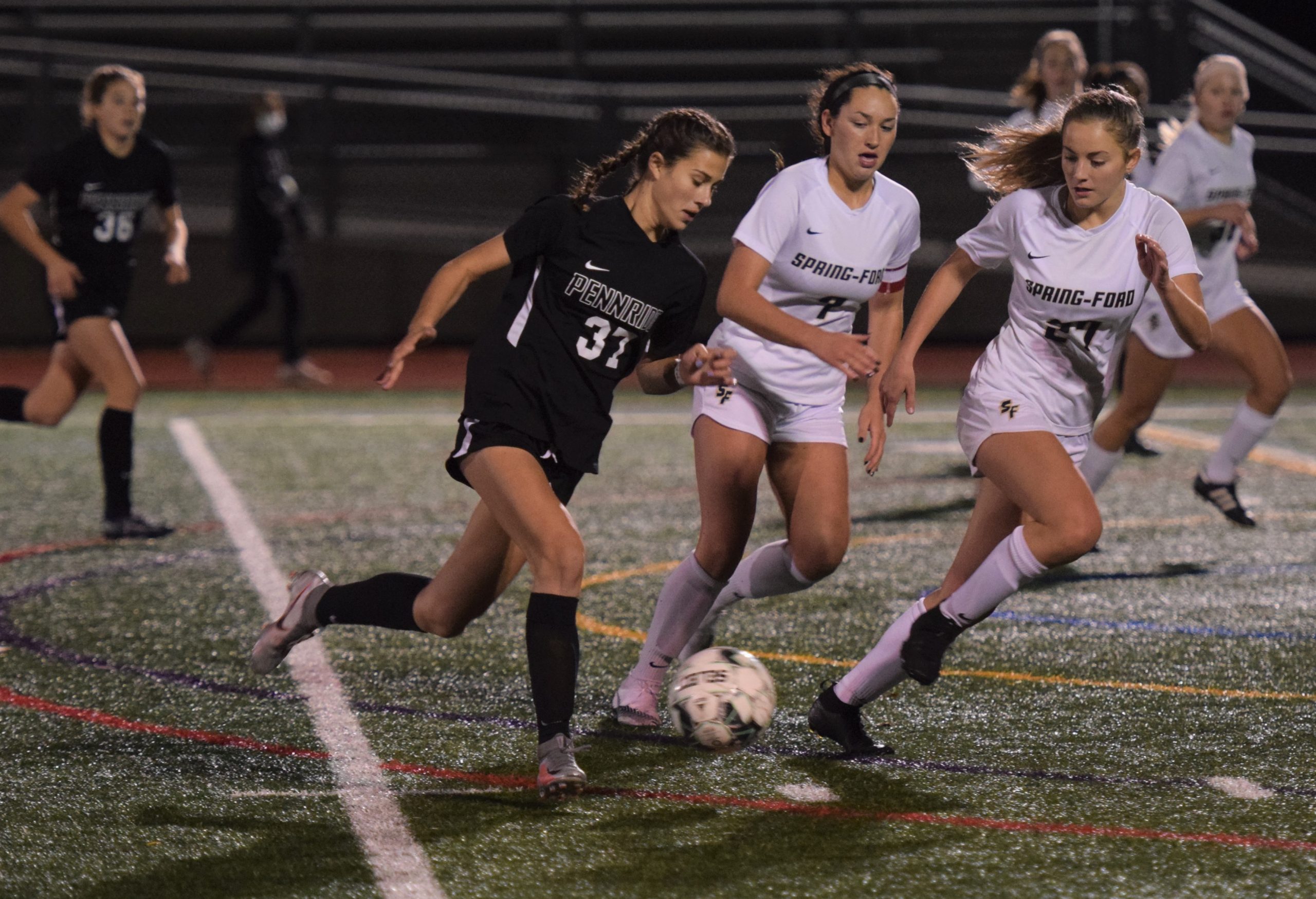 The last three times the Penridge girls soccer team played deep into the postseason, the Rams relied on upperclassman-heavy lineups.

This fall, as the District 1 champion Rams prepare to host District 11 champion Parkland on Tuesday night, it’s a bit different. Pennridge starts more freshmen than seniors as a youth movement has taken hold of the squad and driven it to the PIAA semifinals.

While the Rams will face their toughest task of the fall Tuesday night, so far, the kids are alright.

“These freshmen were sitting in the stands for years watching this program play in the postseason and I think they got a really good taste of it the last couple years watching us go as far as we did,” Rams coach Audrey Anderson said. “When they’re here, they want to make the best of it and make the most of it.”

Tuesday’s match, which is set for a 6 p.m. start at Pennridge, is a rematch of the 2018 PIAA quarterfinals where the Rams rallied from a 2-0 halftime deficit and advanced past the Trojans in a spot kick shootout. Parkland, which beat Williamsport in Saturday’s PIAA quarterfinals, is making its first semifinal appearance in the last 17 years.

The 14-0 Trojans are led by senior standout Alex Marsteller, won their fourth district title in the past five years and have an impressive ratio of 63 goals scored against just three allowed. Marsteller, a Binghamton recruit, has 10 goals and 12 assists on the season.

Pennridge enters off its second straight District 1-4A championship after topping Spring-Ford 2-0 on Thursday night. The Rams are in the state semis for the third straight year, advancing to the title game in 2018.

“It’s so hard to put into words how proud and excited I am for every single one of them,” senior co-captain Lindsey DeHaven said. “We have six freshmen stepping up and playing amazing as well as sophomores and juniors, it’s incredible the way they respond to our coaching and our seniors.”

Unlike the Pennridge teams in 2016, 2018 and 2019, that were anchored by strong senior and junior classes, this year’s group leans on its underclassmen just as much as its experienced players. All six freshmen on the roster feature for the Rams, who also start one sophomore with two more used as reserves.

The emergence of the team’s freshmen also helped the Rams survive two notable losses during the year. Senior Maddie Angelo, a Youngstown State recruit and the team’s top returning defender, along with junior winger Emily Kriney are out due to injury and left two more starting spots that have been filled by freshmen.

In the back, freshman Anna Croyle has filled in and locked it down at center back while freshman Casey Malone has been strong at left back. With seniors Kera Dam and Cady McKean taking up right back and center back respectively, it’s a good mix for Pennridge.

“Regardless of age or how much experience you have, we don’t make any excuses,” McKean said. “It’s such a competitive program that everybody works so hard to get into a spot. We’re all working for each other and we all have the same goal so we were really motivated from day one.”

Offensively, it’s been a host of underclassmen helping carry the scoring load. Freshmen have accounted for 25 goals this fall, led by midfielder Liv Grenda’s team-high 12 tallies, five from Sophie Craig and four from Tori Angelo.

Croyle has even chipped in three goals and it’s given the Rams a wide range of options while opening space for Lindsey DeHaven (seven goals), Leah Malone (seven goals) and Riley Hepler (six goals) to finish chances.

“We said before (the district final), it’s been an incredible run and not too many people would have put us where we are,” Anderson said. “Whether it was ‘too many freshmen,’ or ‘they lost a lot’ or Kriney and Maddie Angelo being hurt, they just played for each other and fought so hard.”

Anderson chalked up the team’s level of competition in the SOL Colonial for seasoning the underclassmen during their 11-game regular season. Pennridge may have won its fifth straight conference crown, but the Colonial is one of the best divisions in the state and the Rams faced several playoff-like matches before the postseason.

Whatever the final outcome is for this season, the Rams already know they have a strong foundation to build on and try to continue their success. It also means this year’s seniors will be leaving their program in good hands when they move on.

“It’s fun to watch,” DeHaven said. “I’m going to be excited when I leave to see what they do because this team is going to be good the next few years with these freshmen.”

FAITH IN FINAL FOUR >> The Faith Christian Academy boys soccer team will try for its first trip to the state championship match Tuesday when the Lions face Tulpehocken in a 6:15 start at Palisades High School.

The District 1 champion in Class A, Faith Christian pulled off a major win in the quarterfinals when it ousted District 11 champ Moravian Academy, the defending state champ. While Moravian did lose 14 seniors from last year’s 24-1 team, it has been one of the stronger small school programs in the state the past few years.

FCA advanced with a 2-1 win after winning their fourth District 1-A title in the last five years. The Lions are 14-1 and haven’t lost since their season-opening match.

A cruel end in PIAA-2A quarters, but Archbishop Wood grateful for its season
Pennridge shows resilience, battles back twice in PIAA-4A semifinal victory