A cruel end in PIAA-2A quarters, but Archbishop Wood grateful for its season 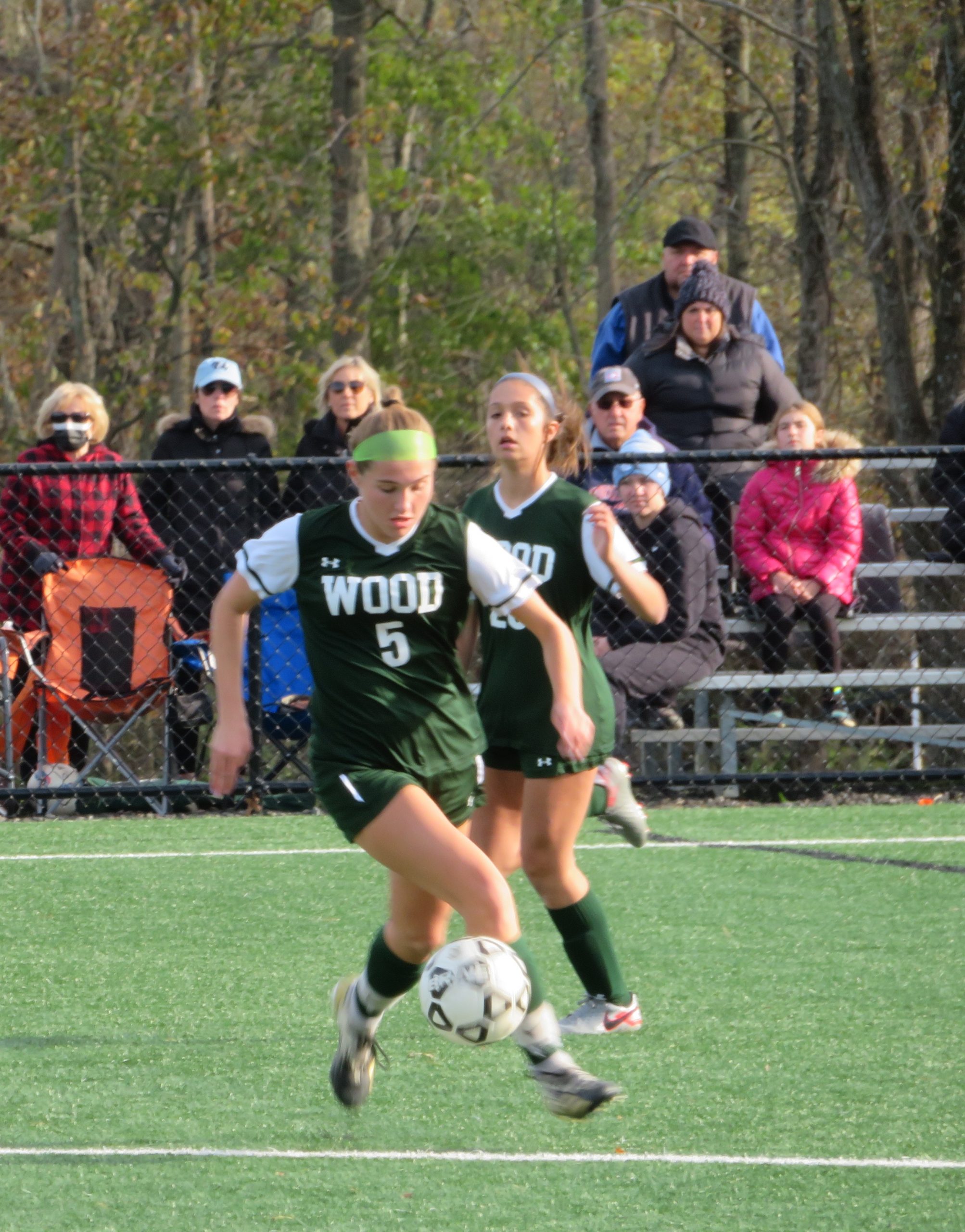 Archbishop Wood's Leighann Kafel (5) attempts to control the ball in a game against Lansdale Catholic.

EMMAUS >> For all artistry and brilliance the game of soccer can provide, the sport has a way of creating agony for those who play it.

Nothing summed that up better than the final 34 seconds of Saturday’s PIAA 2A girls soccer quarterfinal between Archbishop Wood and Allentown Central Catholic. A tap-in rebound goal off a saved shot and a desperate, sprawling denial on the goal line in the final second was enough to spell an end for Wood’s season.

Despite leaving all they had on the field, the Vikings had to pick up the pieces after a 1-0 loss to Allentown Central Catholic ended their season at Emmaus High School.

“The first thing I said to the girls is the game is cruel sometimes,” Wood coach Tom DeGeorge said. “I thought we were the better team, we had tons of opportunities to finish the game and the ball didn’t go in. Even after they scored, we should have had one to tie it up and the ball wouldn’t go in the back of the net for us.”

The District 11 champion Vikettes had plenty of height and some speed but they were looking more to beat Wood off counters and a direct style of play. For the Vikings, the District 12 champion, the idea was to connect through the midfield and flanks before getting the ball back in front of goal for a chance.

At times, Wood played too sped up and rushed passes or didn’t take the extra half-second to scan the field and worked the ball into trouble but for the most part, was able to create opportunities. Midfielder Emily Beck had a strong first half, with a blast from deep ringing the ACC crossbar with 27 minutes left and forcing another save in the last five minutes.

“I told them it was going to come, I really thought it was,” DeGeorge said. “When you have the ball most of the game, you’re going to keep getting opportunities. It just never came.”

For their part, senior starters and captains Paige Hoeger and Leighann Kafel understandably shared the disappointment in the way it ended but were grateful for the chance to play this fall.

“We had a really young team, they’re all really good, young players and they’re going to keep getting far,” Hoeger, a VCU recruit, said.

Wood generated eight corners, put five shots on target, had another first half hit by Alyssa DeGeorge hit the crossbar and put together numerous other runs, crosses and free kicks that just wouldn’t find the net.

In a season that had already started late, Wood was even further behind in getting on the field. With limited time to prepare and jam games in before the start of their state tournament on Tuesday, there was always a risk of wearing down late in a close game.

“We had no training camp, we got flung into it and played seven games and I feel like the last 20 minutes, fitness got to us a little bit,” DeGeorge said. “We tried to get them early because we couldn’t let them keep hanging around. In the last 20, the momentum changed and they gave us some problems.”

The Vikettes’ Abby Kofroth gave Wood its first real scare with 8:45 to play when a shot from the right side clanged the inside of the far post but rebounded out of the goal. However, Allentown Central Catholic was gaining ground and would put the game away late.

A shot from Madalyn Szoke off the left side forced Bella Diodato into a good save, but the Wood keeper could nothing as the rebound rolled across the now open goal and senior Erica Dietz punched it in with 33.2 on the clock.

Throwing everyone up, the Vikings nearly stole a late equalizer at the bell, but a shot from close range was kicked off the goal line by defender Carly Rohrbach, saving the Vikettes and gutting the Archbishop Wood players and staff.

“What we started here the past couple years, kids want to be part of it,” DeGeorge said. “Last year we lost in the 3A semifinals to a team leaps and bounds above us, but this year, we felt like we were going to win it all, but I’m just disappointed for my players and my seniors.”

DeGeorge, who is in his third season at Wood, pointed to seniors Paige Hoeger and Leighann Kafel as pillars of the program’s rise over that time frame. Calling the midfield duo “irreplaceable,” DeGeorge said it’s tough losing the two of them.

Kafel, a first team All-PCL selection last year, felt the state tournament is now the bar for the program and she wants the host of returning players to keep working to take the next steps of going past the semifinals and lifting a state championship.

“That’s what we wanted to do and we wanted to help get to,” Kafel said. “Especially with two transfers coming in and bringing new people in with who we had last year, we came together very quick and played well in all our games. We connected and scored a lot of goals, it’s just a shame it ended this way.”

“We’ve always gone far in the playoffs but more importantly is the experience, I’ve met some of my best friends and had such a good time with this team,” Hoeger said. “It’s the best part of high school.”

“It’s such a family,” Kafel said. “The three or four months you’re together, it’s such a good time and you just don’t want it to end. Just like today, it’s all over like that.”