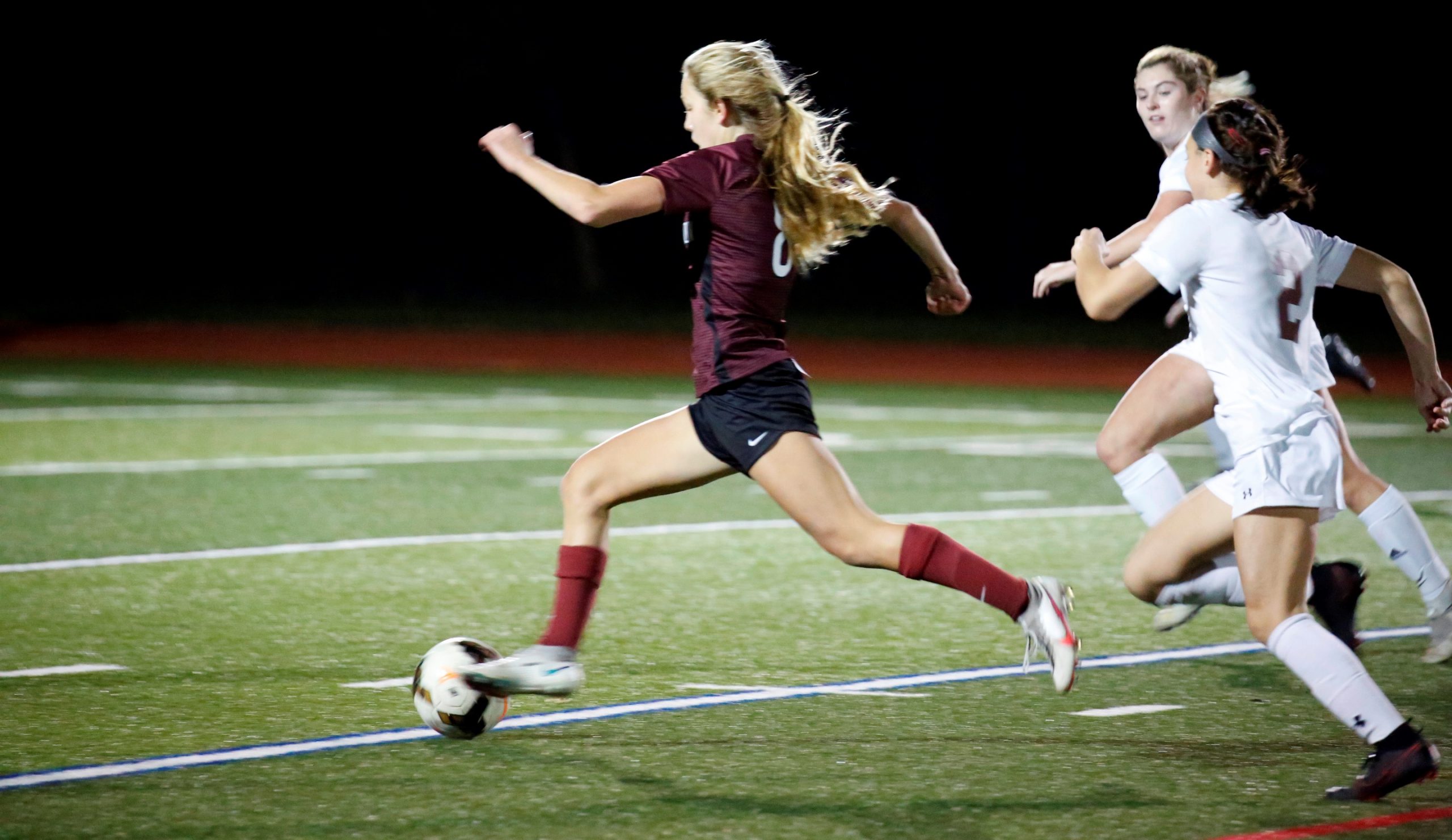 Lower Merion remains the only undefeated girls’ soccer team in the Central League after two big wins against strong Radnor and Conestoga teams in the past week.

The Aces (7-0) earned a 2-1 win against Conestoga Nov. 5. Lower Merion opened the scoring in the first half with a crossing pass from Roberta Moger to Hannah Blodget, who pushed the ball past the left fullback and slotted the goal past the Conestoga goalie.

“The first goal by Hannah was huge for us and our momentum,” said coach Kevin Ries.

The Aces pushed the lead to 2-0 off a corner by Moger that found the foot of Elly Slenksy, who easily slotted the ball into the far post.  Conestoga cut the lead in half with 15 minutes to play when Sophie Koziol converted a penalty kick, but the Aces’ defense shut them out the rest of the way despite two last-minute Pioneer corners. Center backs Ellie Ward and Lily Garton cleared many long balls in the final minutes.

Blodget said, “Our defense was decisive in breaking apart Conestoga’s counterattack, and our midfielders did a phenomenal job of dictating the game with consistent distribution and tenacity in winning turnovers.”

Ries said, “This year’s team knows what it takes to win close games, and  I am proud of the way they played tonight. The midfield of Elly Slensky, Ella Braufeld, Emma Burke and Kate Jackson were outstanding tonight.”

Two days earlier, the Aces defeated Radnor, 3-0. The Aces dominated most of the play during the first half, and before halftime Roberta Moger hit in a corner to the back post, where Hannah Blodget slotted it past the goalie. Lower Merion kept its 1-0 lead through halftime as senior goalie Audrey Brown made some crucial saves.

In the second half, sophomore Grace Downey took the ball down the left wing and rocketed a shot into the back post. Blodget finished the scoring with a shot from the top of the box to make it 3-0, assisted by Ella Braufeld.

Ries said, “The backline of Ellie Ward, Lilly Garton, Roberta Moger and Sadie Cohen kept the Radnor offense in check all game.  I feel like we are playing our best soccer right now. We put a lot of pressure on the other team’s backline with Grace, Hannah and Maya Masotti.”

Earlier this season, Ries earned his 200th career win as the Aces defeated Harriton, 7-0, Oct. 20.
“I have had a lot of great teams and players over the years that each contributed to those 200 wins,” noted Ries.
“It was nice to see us play well together and create chances for each other. We scored early in the game which helped set the tone. Maya Masotti had her best game of the year. We are picking up momentum and are going to get better as the season goes on.”
Masotti, the Central League girls’ soccer MVP runner-up last fall, scored the game’s first two goals, the first at 5:23 off a throw-in by senior Hannah Shalaby, and the second on a penalty kick after Hannah Blodget was taken down in the box.
Emma Burke tallied the Aces’ third goal at 14:05 with a face/header off a Roberta Moger corner, then Amanda Rossello scored at 20:46 with a chip over the Harriton goalie from a Masotti through ball. Ella Braunfeld made it 5-0 from the upper 90 off a back pass from Blodget.

Thirty-six seconds into the second half, Grace Downey tallied on an impressive laser shot from 25 yards out, and Blodget later finished the scoring with a goal from the corner.
Wednesday, the Aces improved to 3-0 with a 2-1 win against Garnet Valley, getting the game-winner from Masotti. Ely Slensky, Ella Braunfeld and Emma Burke played well in the midfield, and the center backs of Sadie Cohen and Ellie Ward kept GV in check most of the second half.

The Aces opened their season with a 2-1 overtime win against Marple Newtown Oct. 17, as Masotti scored 24 seconds in OT for the game-winner.