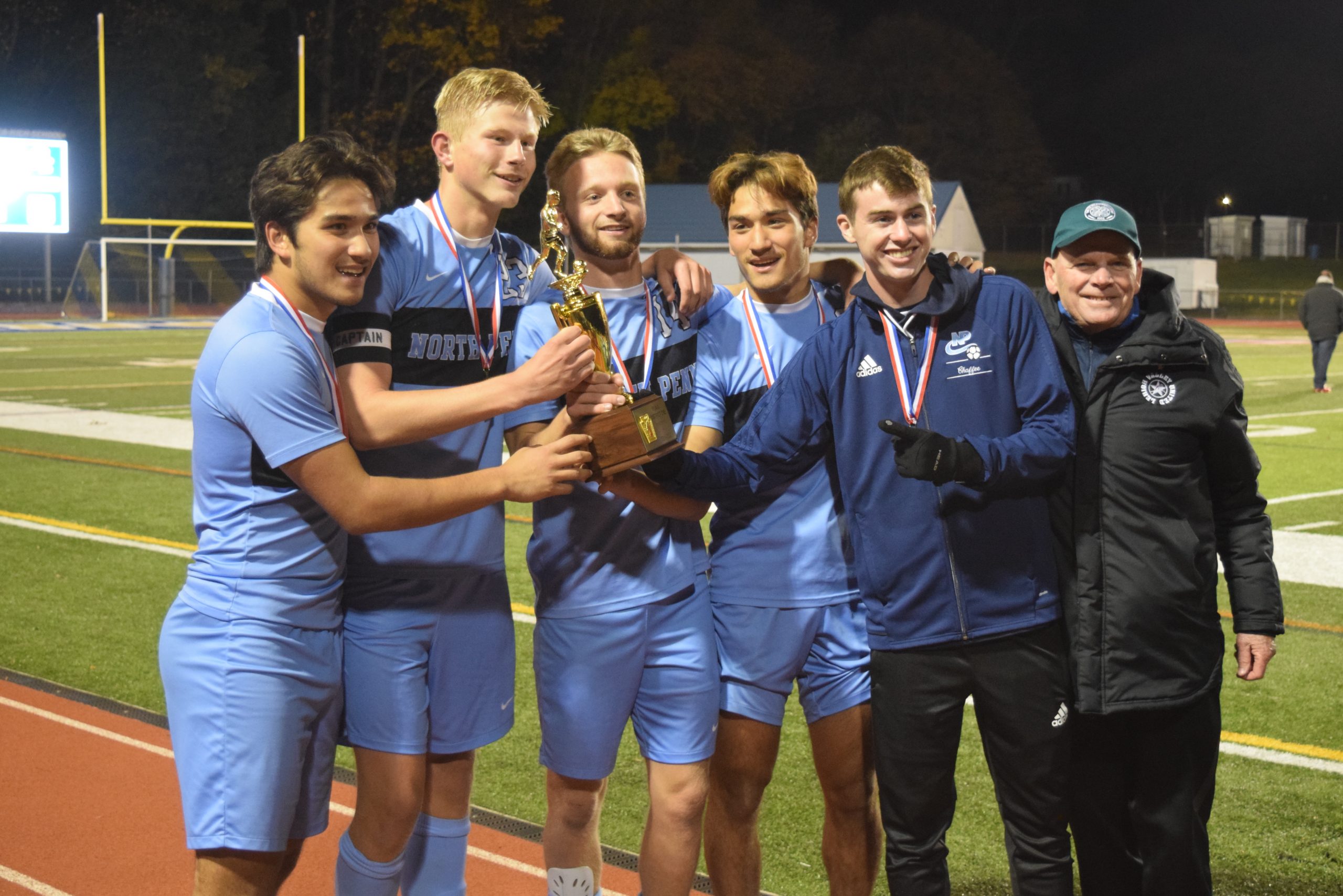 While the remaining boys and girls soccer teams from The Reporter/Times Herald/Montgomery Media area may be at different points on their postseason journey, the stakes are the same for all of them.

In Class 4A, the Pennridge girls and North Penn boys find themselves a win away from playing for a second straight District I title while the Pennridge boys and Abington girls are trying to earn a shot to play for a trophy. Gwynedd Mercy Academy will have to knock off a longtime rival and state power in the Class 3A final while a handful of other local teams are preparing for the abbreviated state tournament.

No matter what point of the playoffs they may be at, every team knows it’s win or the postseason is over.

No.7 Neshaminy at No. 6 North Penn >> Ignore the seeds, this is a match between two SOL conference champions and two teams that have been in fine form all season.

Neshaminy, the SOL Patriot champion, comes in with a 10-1-2 record and an excellent defense that’s posted nine shutouts in 13 matches. Senior Trevor Rush leads the defense along with backs Mike Albarrin, AJ Rivera and Lou Salmi. Midfielder Gavin Rowan, a senior, has stepped up his play over the past few weeks and will orchestrate Neshaminy’s attack.

The Knights, who are both the defending District 1 and PIAA champions, raised an SOL Colonial title this fall and enter with an 11-2 record. North Penn’s thrived on dramatics in the postseason, winning its first two games in overtime but it’s a team that knows how to win in the postseason. Louisville recruit Josh Jones leads the Knights, who also rely on senior forward Dominik Gedek, senior keeper Sawyer Meade and senior midfielder Roman Ilvoski.

No. 12 Pennridge at No. 9 Spring-Ford >> Again, toss the seeds out the window for this one. Also expect a close game as each game the teams have played in the postseason have ended in a 1-0 scoreline.

The teams, both called the Rams, have each gotten an unexpected home game in the postseason. For Pennridge, that was last round with a 1-0 win over Upper Dublin, but the visiting Rams on Tuesday have no problem and grinding for a win on the road. Set pieces have been a major asset for Pennridge in the last two weeks but they’re also dangerous in the run of play with speedster Aidan Castle, midfielders Ben Scary and Carlos Erazo and center backs Shane Velez and Colin Monahan serving as targets on restarts.

Spring-Ford, which knocked off PAC nemesis Boyertown in the first round and top seed West Chester East in the quarterfinals, relies on a veteran lineup with 10 starting seniors. Senior captain Tommy Bodenschatz is the team’s engine while veterans like Andrew Merchant, Colton Pollock, Ekow Asomaning and Shlok Shah have experience in big matches. Junior Eric Moriarity was a late fill-in for freshman Logan Hyduke in goal last round, but both have posted a shutout in the playoffs.

No. 3 Pennridge at No. 2 Abington >> Tuesday’s semifinal pits two of the top attacking units in the district up against each other for a second playoff meeting in the past three seasons. This time, the Ghosts have home field but know they’re still in for a major test.

Pennridge, the SOL Colonial champion, has scored nine goals in two playoff games and easily could have had more if not for a stellar game from Pennsbury’s Emma Corso in the quarterfinals. A potent forward line featuring Leah Malone, Riley Hepler and Tori Angelo is part of it, but the Rams midfield led by Lindsey DeHaven and Liv Grenda is full of scoring threats that opens up even more up top. The Rams will start for or five freshmen but there are plenty of holdovers from last year’s District 1 champion and state semifinal squad still around.

The Ghosts’ season started a week late but they wasted little time getting up to speed and captured the SOL Liberty title, their second conference crown in three years behind a high-firing front line led by seniors Casey Touey and Lesha Karaba and sparked by freshman Piper McGinley.

Abington, which has seven goals this postseason, also knows its solid midfield of Abby Bautista, Carley Slavin and Maura Day will be busy against Pennridge and center backs Ally Holden and Caroline Hughes.

No. 3 Gwynedd Mercy Academy at No. 1 Villa Joseph Marie >> Once again, the only thing standing between Gwynedd Mercy Academy and the state tournament is a team that makes a living playing deep into November. The fact that Villa Joseph Marie is also a fellow AACA member means the two know each other plenty well as they gear up for a winner-take-all third meeting this fall.

While the Monarchs lost both games to the Jems during the compressed regular season, they were in the game both times. Offensively, senior Sam Berish has been on a roll with four goals in two playoff games and she’ll give VJM plenty to think about defensively with Kaylie Griffin at forward along with Hannah Griffin and Cassidy Palazzo on the wings. Senior defender Hailey Morris and senior keeper Grace Galbreath will have to be on point to keep VJM from getting ahead early.

The Jems, last year’s district champion, are looking to add another trophy to their overstocked case and move on toward a seventh straight state title game appearance. Senior Julia Beck, last year’s AACA Player of the Year, anchors the Jems’ robust defense but is also a scoring threat and set piece artist in front of keeper Morgan Murphy while senior Katie Sullivan is the team’s top offensive finisher and playmaker.

1-1 St. Basil Academy vs 12-1 Archbishop Wood >> The District 12 champion Vikings, a Class 3A semifinalist last year, will look to make a run in 2A but will have to get past the five-time District I champion Panthers to do so. Tuesday’s contest will be a 2:30 start at Ukrainian Nationals Club.

St. Basil’s record only lists two wins but the Panthers always emerge from the rugged AACA ready to go and this season is no different. Junior Tori Nigro has been a nice addition on the wing while senior Shannon Remolde is a tough-minded forward and keeper Jackie O’Brien is a show-stopper in net.

When they’re clicking, the Vikings offense is tough to contain. Senior Leighann Kafel gets the ball rolling while a score of players like Alyssa DeGeorge, Paige Hoeger, Emily Beck and Megan Hickey can all finish. Daryn Savage locks down the back line but is also dangerous hitting free kicks and getting on the end of corners.

The winner will face 11-1 Allentown Central Catholic on Saturday.

12-1 Conwell-Egan at 1-1 Dock Mennonite >> The Pioneers begin their state playoff quest with a home game against Conwell-Egan fresh off a convincing 6-0 win against Calvary Christian in the District I final.

Dock showed the full scope of its attacking potential in its district final after clawing past Delco Christina in the first round. Senior Peyton Scialanca serves as the maestro for the Pioneers, holding possession and moving the ball for the all-A group of Abby Lanning, Abby Mellinger and Ashley Lapp along with forwards Emma Kratz and Kenzie Derstine to put balls in the back of the net.