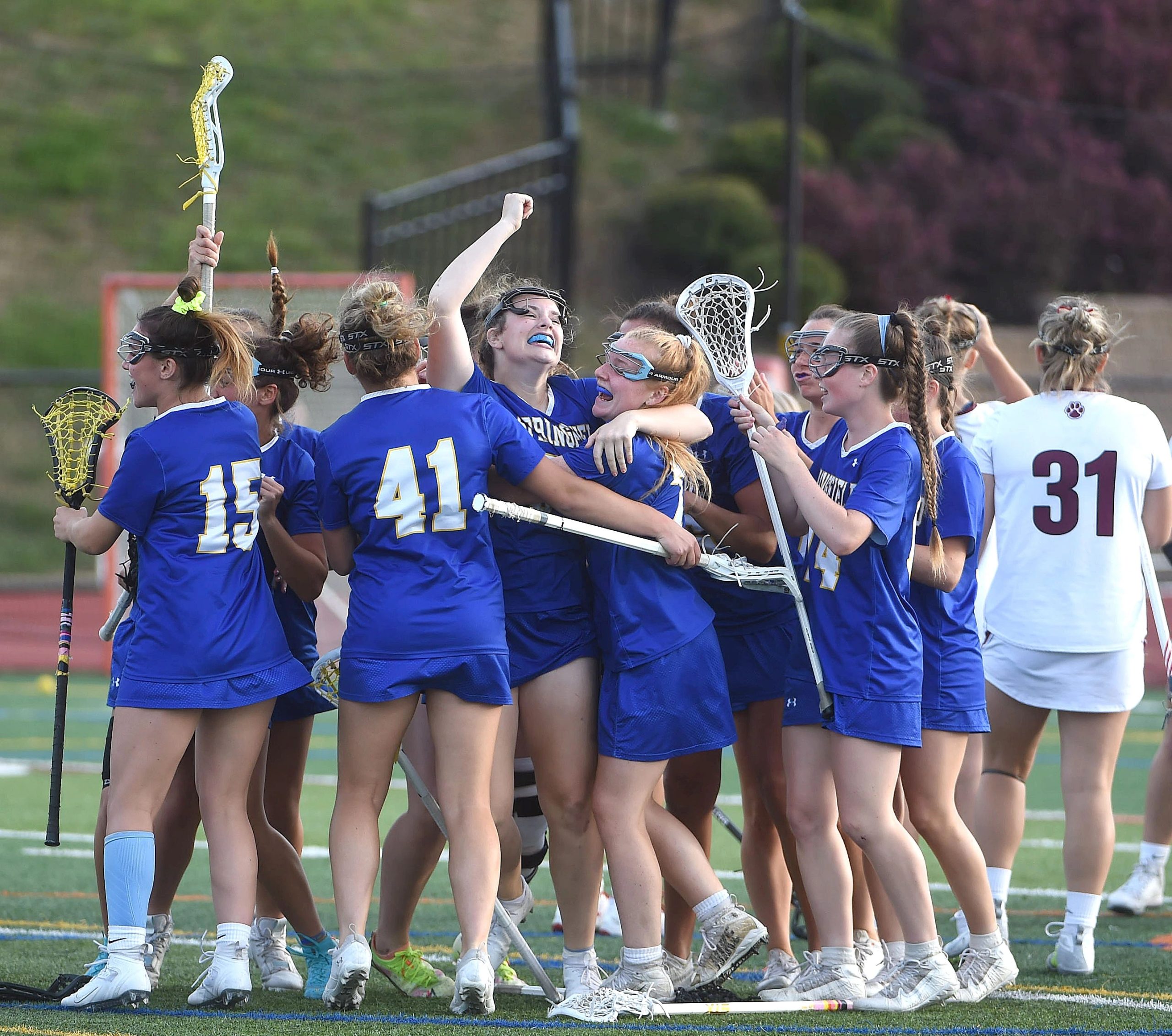 CONCORD – Gabby Rizzio crouched in her defensive stance like a caged tiger.

Two and a half minutes remained in regulation, the District 1 Class 3A girls lacrosse semifinal tied, and the ball in Garnet Valley’s hands after Erin Barnes controlled a draw. Rizzio, the Springfield senior midfield leader, was the reason it was tied, her latest sortie to the crease bringing the Cougars all the way back.

Springfield goalie Maddie McBride covers the ball in her crease at the end of regulation. That stop ended a late threat and allowed Springfield to win in overtime, 10-9, over Garnet Valley in a District 1 Class 3A semifinal Tuesday. (PETE BANNAN- DAILY TIMES)

So as Rizzio barked out encouragement to the defenders behind her – maybe in the process drowning out the anxious ticking of the clock in her head. For two taut, tense minutes of suspended animation, Rizzio and her team waited for Garnet Valley to make its move, swaying and praying.

“It was absolutely terrifying, if I’m going to be honest,” Rizzio said. “I had to talk myself out of it. I’m usually down on myself a lot of times, but I knew, I trusted my defense, my goalie. I knew we could stop them, and I knew we were going to get the ball back.”

A defensive play helped Springfield dodge that threat, and Erin DeStefano cashed it in early in overtime, spinning off her low defender and burying a high shot to send No. 14 Springfield to a 10-9 win.

The latest in a string of upsets by the Cougars (15-6) sends them to Thursday’s District 1 final. This one was perhaps the steeliest one yet, the Cougars trailing 7-3 at halftime to the No. 7 Jaguars (14-7) before rallying. They tied the game at 8, then answered when Garnet Valley untied it in a wild final six minutes that featured big goals and big saves on both sides.

The comeback started 13 seconds into the frame. Ava Kane’s goal at the horn had set Garnet Valley into the break up four. But Claire Lynch scored right off the initial draw to get it back to a three-goal margin.

“We keep our energy up, keep our heads up,” DeStefano said. “We were down three and we were like, three isn’t anything; we have a whole 25-minute half left.”

Jaclyn Guille’s goal with 10:44 left evened the game at eight and cued the chaos.

Garnet Valley, which did so well facilitating through Maddie Shoemaker and its lanky shooters early, couldn’t recapture that magic.

“We practice it a lot,” Ava Kane said. “We practice to be patient but also know in those moments we have each other’s backs. When Coach (Jenny) Dooley tells us to go, we know we can. We’ve practice it a lot and I think we are really confident in that area. We know when to hold it and when to pick up the pace.”

Kane and Mia Zebley scored twice each. Mia Raucci added her second with 7:46 left on a low bouncer to put GV up 9-8. Shoemaker had a goal and two assists.

Springfield’s Erin DeStefano attacks the goal in the first half. DeStefano scored four times, including the overtime game-winner, in a 10-9 win in the District 1 Class 3A semifinal. (PETE BANNAN- DAILY TIMES)

But Springfield goalie Maddie McBride stoned Sophie Kingsborough point blank in transition with a chance to make it 10-8, which temporarily swung the momentum back to Springfield.

“It was the greatest thing ever,” Rizzio said. “I was sitting there and praying, ‘like god please let’s get a save.’ Maddie really clutches up when she needs to, and when she made that save, I think it brought energy to everyone, and we knew that we were going to take advantage of that and we were going to score.”

That is, until Mak Butler stood tall on Lynch at the near post with 3:30 left. Back and forth they went, with Valerio picking off a pass. That led to Springfield possession and a timeout where Rizzio, the uber-athletic senior middie with the perpetual greenlight, listened patiently to the play, then saw her matchup and bombed to the goal with 2:34 showing.

Barnes won the ensuing draw, and Garnet Valley held for two-plus minutes for the look. But with Rizzio and the defense holding firm, McBride picked off a pass and ran out regulation.

Maddie Kane won her team-high fourth draw to open the extra session, and Kaitlyn Stankavage picked up a yellow card. Rizzio, ever the vocal leader, issues the edict: Wait for the best pass, not the first pass.

DeStefano, already with a hat trick in her bag, obliged.

“I see it and I have to fake before I shoot because that goalie’s great,” DeStefano said. “And I know my team, if I miss, is going to have my back.”