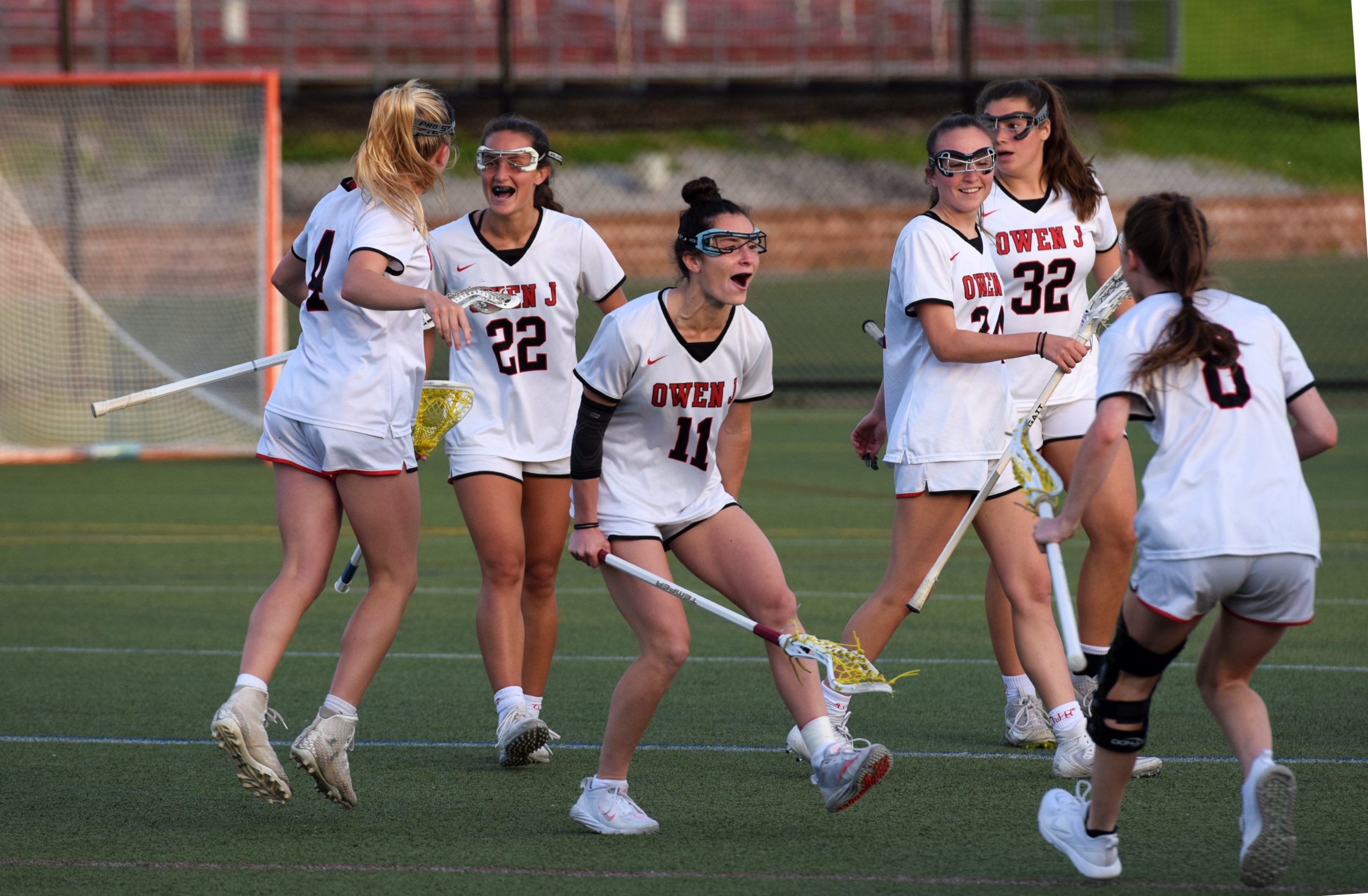 Owen J. Roberts players celebrate during a second half timeout against Methacton on May 24. (Austin Hertzog - MediaNews Group)

Tuesday night, Owen J. Roberts took away Methacton’s lacrosse future, and created a new one for itself.

With a devastatingly dominant performance on the draw from Gabbi Koury and a clicking attack, No. 2 seed Owen J. Roberts cruised to a 12-3 victory over No. 6 Methacton in a District 1 Class 3A playback matchup that earned the Wildcats their sixth straight trip to the PIAA tournament while sending the Warriors into the offseason.

Wildcats clinch sixth straight state trip with a dominant day on the draw from Koury and overall great performance pic.twitter.com/dixYvh7zL0

Owen J. Roberts’ Gracyn Smith (32) celebrates with Ava Clemson (34) after scoring a goal in the first half against Methacton during a District 1-3A playback game Tuesday at Owen J. Roberts. (Austin Hertzog – MediaNews Group)

The Warriors sent shockwaves around area with their upset of the previously unbeaten Wildcats in the PAC final on May 14. The shock Tuesday was the degree to which Owen J. Roberts (21-2) dominated the game.

Last year’s Mercury All-Area Player of the Year was an unstoppable force on the draw with Koury (nine draw controls) winning 16 of 17 draws for her team with the help of wings Alexa Vogelman and Ava Clemson (five).

“Phenomenal,” senior Gracyn Smith said of the draw dominance. “It gets everyone pumped up, gets our sideline going, gets us fired up on attack and want to do better. It starts with the draw. As soon as we get possession we’re in control of the game. The past couple games our draw control haven’t been as stellar as they normally are so that has been part of the problem (in recent close results). But this game is the first step toward achieving our goal of being state champs.”

The Wildcats will host No. 8 Downingtown East – a 13-10 winner over Unionville in Tuesday’s other playback – on Thursday (7 p.m.) in the District 1 fifth-place game.

Koury’s level of motivation was to be expected after she was forced to sit out the final 18:12 of the PAC championship game due to two yellow cards accrued, relegated to watching the Warriors claim their first league title and halting OJR’s run of six straight.

“Not having that control, I don’t even know how to describe it. Sitting on the sidelines just watching them struggle back and forth, especially when you’re losing a game, was extremely frustrating,” Koury remembered of the PAC final.

“The whole team, our heads were in the right space (Tuesday) and we were super motivated to come back and prove that we’re the better the team. I thought we played a really good game. We had a lot of assisted goals and showed really good chemistry. We need to limit the turnovers moving forward, but other than that … we had so much energy.”

In their fourth meeting of the season, Tuesday went much more like the first two, blowouts in the Wildcats’ favor.

The trend-breaker, Methacton’s 8-5 victory in the PAC final, has served as motivation for the Wildcats, who welcomed a rematch.

“Since that game we’ve wanted to prove ourselves. We have to,” Koury said. “We felt like that game was a fluke and we really needed to step up our game and take it to the next level. We couldn’t make that mistake again.”

Both entered Tuesday off narrow losses suffered in the District 1 quarterfinals on Saturday, OJR falling to Garnet Valley, 6-5, while Methacton was topped by Springfield-Delco, 13-12.

Another crack at Methacton was a big boost to OJR’s psyche though.

“I was so excited,” Smith said. “After seeing them in our bracket for districts, I was eager to play them. We wanted to prove to everyone that (the PAC final) was an off day. With everyone coming out as strong as they did, that’s the reason we won.”

That was suboptimal, not just because they were against a team out for blood, but because a poor start would spell doom.

Goalie Mackenzie Clark and the Warriors defense did well to keep OJR at bay in the first half, the attack committed a slew of unforced errors that didn’t allow Methacton to ever gain a foothold.

“We had six balls we threw away on attack in the beginning of the first half,” Markle said. “Had we not done that and taken some control, this would have been a different game. The momentum wouldn’t have shifted.

“It was a winnable game at 4-1. In the PAC (championship) game, our attack took charge. Everyone was on. It was different than tonight. It was like they didn’t get off the bus. It was a bizarre.”

Owen J. was not out of reach at halftime with a 4-1 lead, but Koury distributed to Doyle and Vogelman for goals less than two minutes into the second half and a 6-1 lead.

After Megan Sanelli scored for Methacton to cut it to 6-2 – Methacton’s other scorers were Jamie Weber and Delaney Smith – the Wildcats’ attack was on full display.

Smith had the highlight of the night with her behind-the-back shoot and score on a feed from Koury to make it 11-3 with 8:50 to play.

“I knew it was coming!” said Koury. “It was the perfect opportunity. So many people try BTB (behind the back) or a fancy shot when it’s not there but that was the right place at the right time.”

OJR is feeling it, that’s for sure pic.twitter.com/FcaUhU5vqq

“As good of a goalie as Mackenzie is I think she would have saved it (from the angle I had) so having that surprise factor caught her off guard,” Smith said. “I was saving it for the right moment.”

Despite its consecutive losses to end the year, there were many right moments for Methacton in a 17-6 campaign that ended one win from a state playoff berth.

“They’re a family,” said Markle. “They bought into everything, they depended on each other and they supported each other on and off the field. A lot of these kids have gone through our program since third grade and it’s just a great group of kids.”