Archbishop Carroll runs away from Villa Maria to reach semifinals 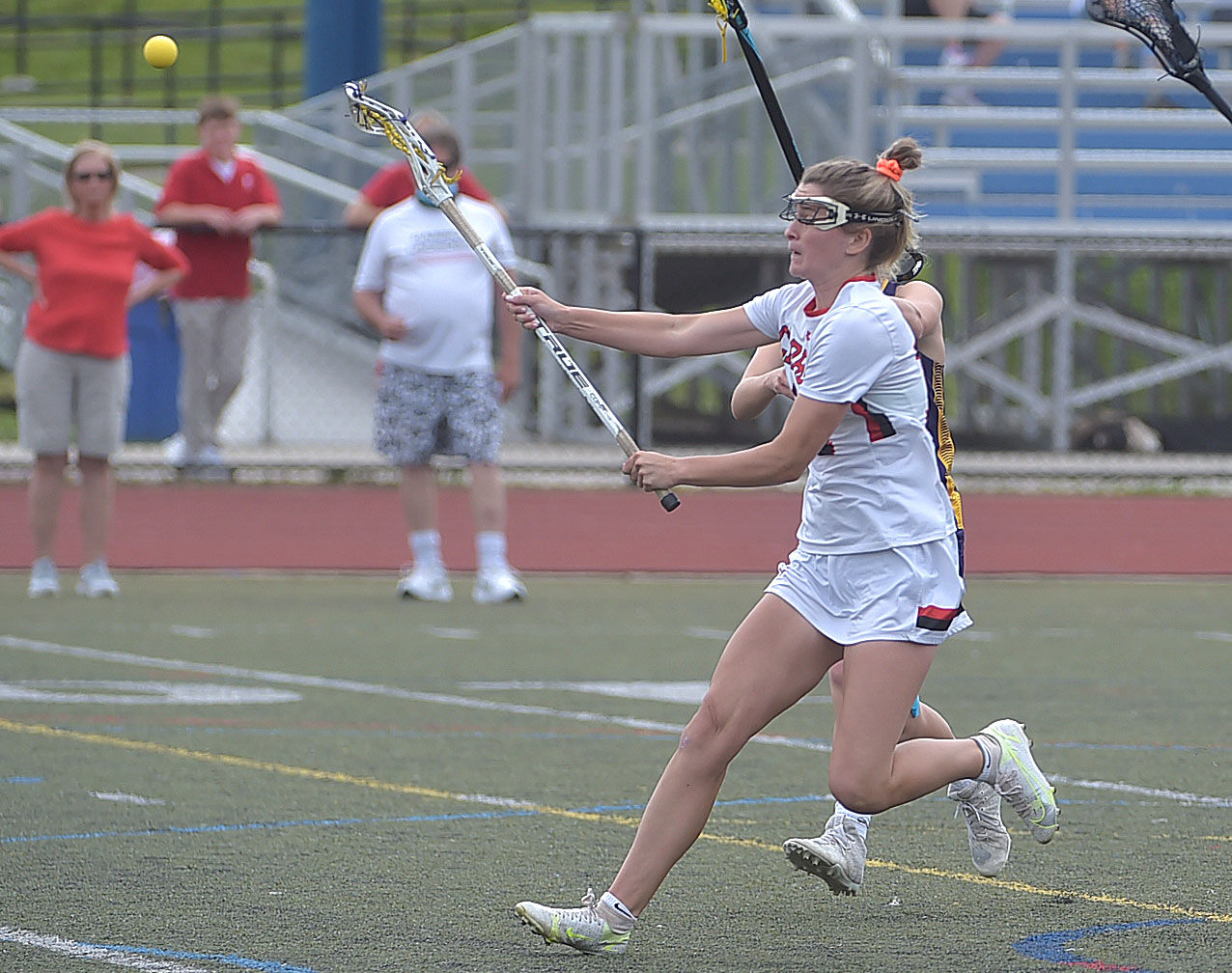 COLLEGEVILLE >> The Archbishop Carroll girls lacrosse team shook off a sluggish start Saturday morning at a steamy Perkiomen Valley High School, turning a two-goal lead into a 10-goal advantage by scoring eight unanswered, as the undefeated Patriots took a convincing 21-9 win over Villa Maria in the PIAA Class 2A quarterfinals.

Archbishop Carroll will now play either Bishop Shanahan or Twin Valley, Tuesday at a time and site to be determined.

Archbishop Carroll (18-4), the District 12 champion, did get on the scoreboard first when Julia Basciano scored from in front to give the Patriots a 1-0 lead. But, after 10 minutes of play, Carroll had only a 6-4 lead on the Hurricanes (16-7) as Villa Maria answered the Carroll goal barrage.

The Patriots, behind a stellar six-goal performance from senior Keri Barnett, scored the next eight goals of the game, largely by dominating the draws in the center circle. At halftime, the Patriots had a 14-4 advantage on the Hurricanes.

“We were a little slow starting today,” Barnett said. “But, we have been working really hard on speed drills in practice and that gets us to fight through the tough times. It was hot out there today but we picked things up after they made it 6-4. We started to get a lot of goals in transition and winning the faceoffs was a huge part of that.”

Barnett, a West Chester University commit, fired a pretty feed to Kelly Mottice to make it a 7-4 Carroll lead. It was the first of Mottice’s four goals for the game. Brooke Wilson fired a rocket from about 10 yards out to make it an 8-4 game and the Hurricanes were really starting to struggle matching the Patriots’ speed.

Carroll then completely took over the game with six goals in the final nine minutes of the first half to give the Patriots a commanding 14-4 lead at halftime. Sarah Durham scored the last goal of the first half on a nice pass from the left side from Basciano, who had three assists to go along with two goals.

“Winning the draws for us was a big plus,” said Archbishop Carroll head coach Lorraine Beers, “Keri is just so strong for us doing that and she is just super. She scores, does the draws and we even need her to play defense. Once she got going they all seemed the get going. Villa Maria was very deliberate when they had possession and that was giving us trouble. So winning the draws was huge for us.”

The Hurricanes got their second wind after halftime and scored twice. Once on a goal by Margie Carden, who led Villa Maria with three goals, and a goal from behind the net by Alex Touey to close the gap to 15-6. But, the Patriots came right back as Brooke Wilson intercepted a Hurricanes pass at midfield and went all the way down the right side, firing a blistering shot into the back off the net and Archbishop Carroll had a 16-6 lead.

Two more Carroll goals, one from Barnett, her sixth of the game, and another from Mottice (courtesy a pass from Basciano) put the Patriots in complete control at 18-6.

“It feels really great and special to be going to the semis,” Barnett said. “Especially since we lost all of last season to see all hard work that we put in come to this is a great feeling.”

Villa Maria head coach Allie Sweeney said that losing so many draws hurt her team, but she was very proud of their effort.

“Draws are such a big part of our sport,” Sweeney said. “Once you score then it goes to a 50-50 ball and we struggled a little this year on that. It is not from lack of effort or anything and we have improved. I am so proud of these girls, especially the seniors, we have 12 of them. This was a special group.”