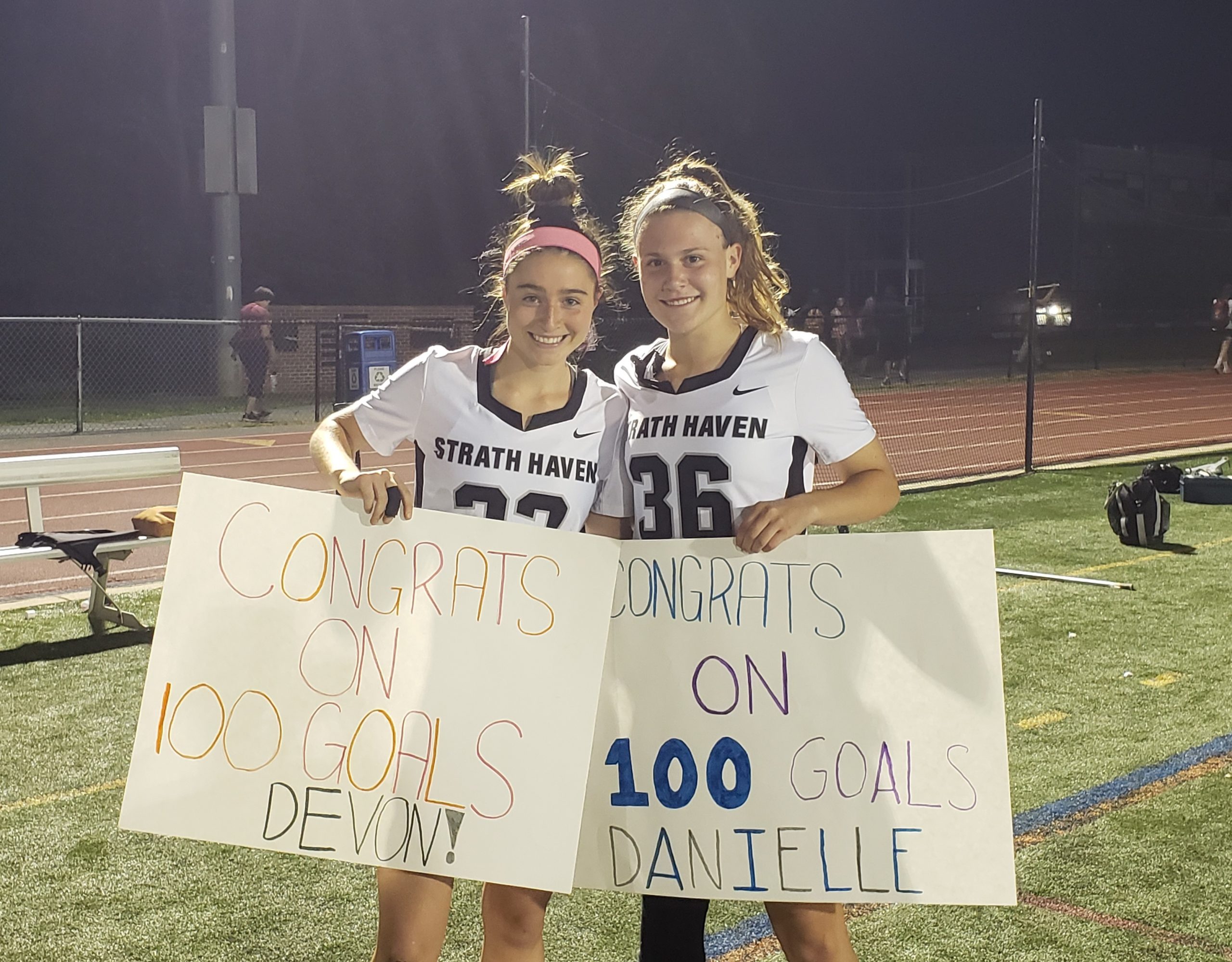 Strath Haven's Devon Maillet, left, and Danielle McNeely recently scored the 100th goals of their careers. Maillet reached the 100-goal mark for the season in the Panthers' 21-8 victory over Mars Saturday in the quarterfinals of the PIAA Class 2A tournament. (mng stAFF pHOTO)

For any Penn State alum or family member, any trip to State College requires at stop at the Berkey Creamery.

For Strath Haven girls lacrosse coach Pigeon Graham and her assistant Megan Fizzano, a stop at the creamery was a must after the Panthers dispatched Mars, 21-8, in the second round of the PIAA Class 2A tournament.

“We were like, ‘We have to give the girls a little treat,’” Graham said by phone on the ride back.

The only problem was that a stop at the creamery was not on the official itinerary.

“The athletic director (Patrick Clancy) and bus driver weren’t so sure about that plan, but we made it happen,” Graham said.

Clancy and the driver agreed to the stop provided the bus was back on the road by 5:30 p.m. The team was ready to go by 5:27, Graham said. And the players appreciated the gesture.

The day was plenty special for Maillet already. The Colgate signee scored six times, including her 100th goal of the season, to lead the Panthers (18-5-1).

“I was surprised,” said Maillet, who will play lacrosse at Colgate in college. “I had no idea.”

The milestone came on her second goal of the game and fittingly off an assist from fellow senior Danielle McNeely. Less than three weeks ago, D&D, as they call themselves, both went over 100 goals for their careers in Strath Haven’s 23-5 victory over Marple Newtown in the second round of the District 1 tournament.

“It’s really amazing because she did it in two and a half seasons,” Graham said. “She was injured halfway through her sophomore year and she didn’t have last season (due to COVID-19). She’s really turned it on this year.”

Maillet found out about the accomplishment during a timeout a short time later.

“I was just so excited,” Maillet said. “I didn’t know it was coming. I was caught up being in states and playing with my team, I didn’t think about it but I was super excited when I found out about it.”

Maillet scored the first two goals to help the Panthers jump out to a 4-0 lead in the first five minutes. The District 7 champion Fighting Planets never recovered.

Strath Haven opened up a 15-5 halftime advantage and cruised into the semifinals for the third time in program history and the first since Strath Haven fell to Garnet Valley in the 2012 championship game, when the PIAA had only one classification.

“I didn’t know what to expect from this Mars team,” Graham said. “We controlled the draw right away and controlled it maybe 90 percent of the game. Danielle McNeely, Kaitlin Nieczpiel and Devon Maillet did a great job on the draw controls today. That was a huge piece of the puzzle for us.”

“We know a lot about them,” Graham said. “I think it’s going to be an exciting, fun game for all of us. A lot of our kids play for Duck (O’Hara coach Jen Duckenfield) for her club and we’ll be playing locally, which is great. We’re really excited for it. We’re looking forward to the challenge.”