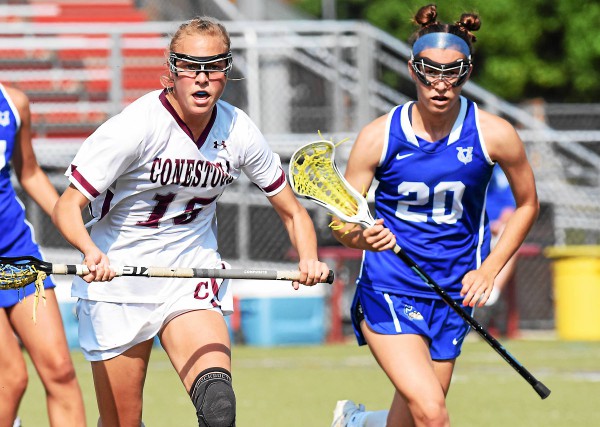 Tredyffrin – Conestoga spread the wealth in its 18-6 win against Great Valley in the second round of the PIAA District 1 3A girls’ lacrosse playoffs at Teamer Field Thursday.

Eight different players scored for the No. 2 seed Pioneers (16-2), who, due to the 90-plus degree temperatures, used 22 varsity players in the contest.

“Offensively, I liked the way we moved the ball,” said Conestoga head coach Amy Orcutt. “We had a very unselfish attack today, we didn’t have just one or two people scoring. This was a good overall team win – we made big plays all over the field today.”

The Conestoga girls will now face No. 7 seed Abington in a Saturday lacrosse doubleheader at Teamer Field featuring both the Pioneers’ girls and boys squads in the third round of the PIAA District 1 3A playoffs (the Conestoga boys defeated Pennridge, 19-3, immediately following the girls’ win at Teamer Field Thursday).

Against No. 18 seed Great Valley Thursday, five different Pioneers scored as Conestoga built a 5-2 lead midway through the first quarter.

In the first half, Conestoga senior goalie Anne Frascella proved a tough nut for Great Valley to crack, keeping the Patriots off the board for the last 14 minutes before halftime (she finished the game with 11 saves).

Meanwhile, the powerful senior duo of University of North Carolina-bound attack Scottie Rose Growney and Loyola (Md.)-bound midfielder Liz Scott teamed up for some big plays as Conestoga went on an 8-0 run to build a 12-2 halftime lead.

Scott completed a first-half hat trick when she rifled a powerful left-handed shot into the cage to make it 11-2, and Cicchitti scored 32 seconds before halftime to make it 12-2.

“We kept making big plays all over the field, which we needed because we knew Great Valley has a great team, and that they could come back,” said Orcutt.

And Great Valley did come back. Early in the second half, the Patriots made a spirited 4-0 run of their own, getting two more goals from the UMass-Amherst-bound Muscella (who finished with a hat trick) as well as scores from sophomores Mackenzie Hilditch and Sarah Karwoski.

“We buried ourselves in the first half, with people dropping the ball, making mistakes, and Conestoga beat us to the punch,” said Great Valley head coach Katie Wenger. “We regrouped at halftime, and started to get it going in the second half.”

When Great Valley cut Conestoga’s lead to 12-6, there was 14:22 left in the game. The Pioneers shut down the Patriots the rest of the way.

Meanwhile, Conestoga senior attack Maddie French and Kienzle bounced in goals (Kienzle’s was for a hat trick), then Growney added a hat trick of her own when she scored with 9:52 left to make it 15-6. With 4:58 left, Scott fired in her fourth goal of the game.