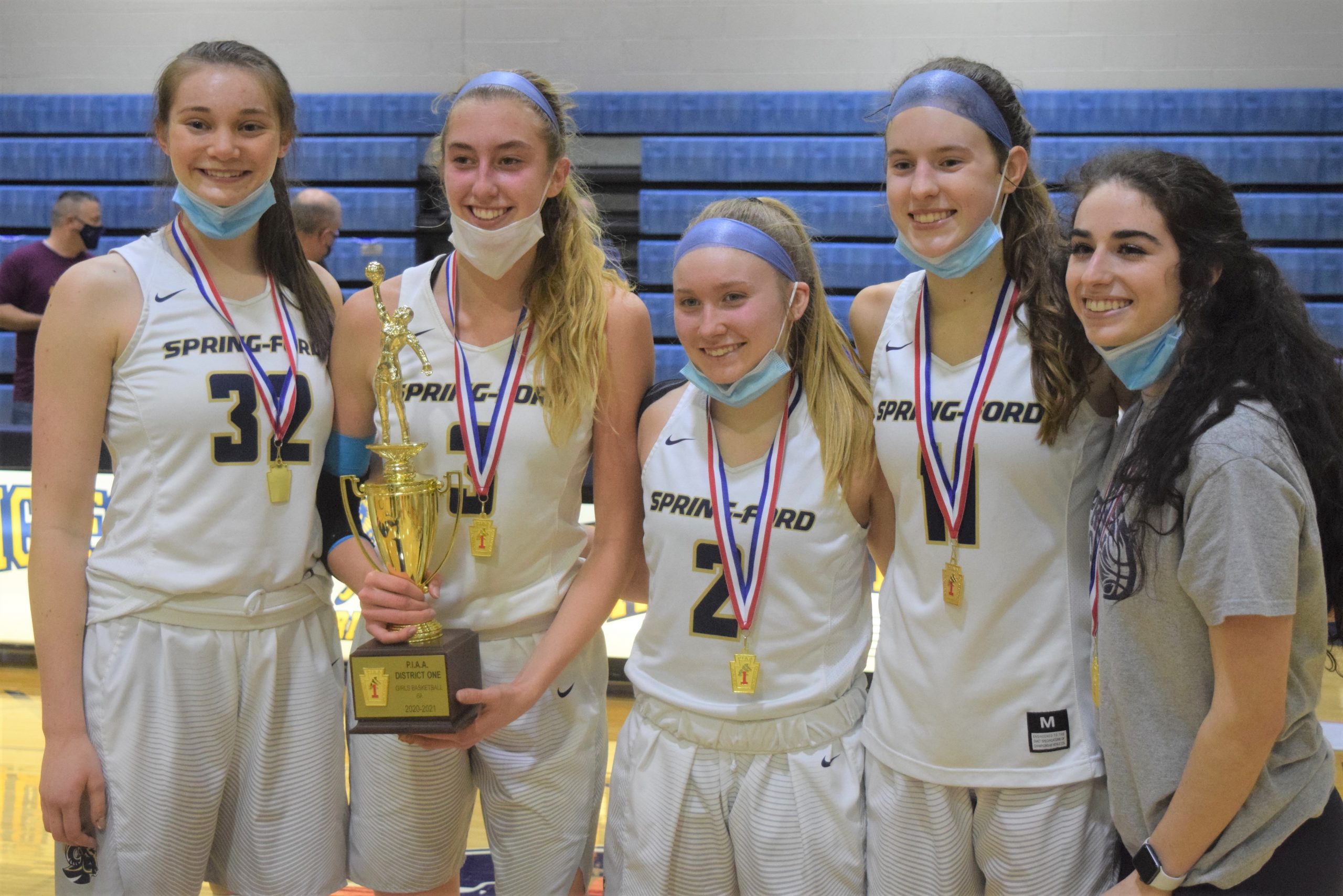 When the Spring-Ford girls basketball team broke through the District 1 semifinal snag that caught the Rams the previous three seasons, Lucy Olsen’s first words were on the nose.

The Spring-Ford’s Class of 2021’s fourth trip to the state tournament truly will be charmed if it ends with a win in Friday night’s PIAA Class 6A girls basketball championship against District 7 champion North Allegheny (5 p.m.) at the Giant Center in Hershey.

A victory would make the 24-0 Rams only the fourth undefeated girls champion in the past 25 years in the state’s large-school classification.

Spring-Ford’s charmed run includes a fourth-straight Pioneer Athletic Conference title and District 1 championship – its first since going back-to-back in 2012 and 2013 – and a spot in the PIAA final for the first time since 2014.

If Spring-Ford fashions itself a team of destiny, opponent North Allegheny may have an ever greater claim.

The Tigers have been the power program in District 7 over the past five years beginning with their only other trip to the PIAA final, the 2017 defeat to Abby Kapp-led Boyertown. They’ve won four WPIAL titles in that span and were alive in the PIAA quarterfinals a year ago when the postseason was shut down due to the coronavirus.

With a combined 50-1 record, there’s no taking away the outstanding seasons of Spring-Ford and North Allegheny.

But only one gets to end the season the way they’ve dreamed.

“I’m excited. I’ve always wanted a state championship throughout my entire career,” Olsen said following the Rams’ semifinal win. “It’s just been such a battle. We’ve lost pretty early in states every other year. One more game to go. I’m pumped it’s with a great team which makes it way more fun to get here.”

North Allegheny: The 26-1 Tigers cruised through the WPIAL playoffs with a 22-point average margin of victory while routing Upper St. Clair 70-36 in the final. Entering states in the quarterfinals, NA dominated District 10 McDowell 60-30 on March 19 and District 3 champ Cumberland Valley 66-40 on March 22.

On Spring-Ford >> The Rams, under 8th year head coach Mickey McDaniel, were always primed for big things in 2021 thanks to its outstanding senior class. Villanova recruit Lucy Olsen, the 5-9 senior guard and All-State first team selection, is the engine of the Rams with elite handle, ability to get the rim and hit shots from the mid-range while scoring 18.0 points per game and team-bests in rebounds (5.9 per game), assists (4.9) and steals (3.0). The program’s all-time leading scorer with 1,682 points, Olsen’s team-record 33 points in the district championship will go down as one of the great performances in PAC history.

Emily Tiffan, a 5-10 forward, is the team’s shutdown defender and averages 11.0 points per game as the team’s most accurate shooter (44.0 percent from 3, 82.4 percent at free-throw line). She’s held every opposing team’s top player to single-digit scoring in the postseason, including St. Joseph’s recruit Talya Brugler of Nazareth in the semis.

Hailey Hudak, a 5-10 forward bound for Bloomsburg, is the primary inside presence and averages 3.4 points and 4.5 rebounds a game.

Sure-handed freshman guard Anna Azzara (8.8 ppg) rounds out the starting five while fellow freshman Mackenzie Pettinelli is first off the bench and has shown great poise and ability to hit clutch shots, including two buzzer-beaters in the state semifinal. Junior Kam Pufko also contributed key minutes in the semifinals and could figure into the final rotation.

Spring-Ford had the unusual benefit of having its entire playoff run occur in their home gym due to neutral sites being eliminated due to COVID-19 pandemic precautions.

Spring-Ford’s Abbey Boyer (2) is helped up by teammates, from left, Lucy Olsen, Anna Azzara and Mac Pettinelli after taking a charge in the third quarter against Abington. (Austin Hertzog – MediaNews Group)

On North Allegheny >> The Tigers have emerged as one of western Pa.’s power programs in Spencer Stefko’s seven seasons in charge but are still seeking their first state title after recent near-misses (2017 final, semifinals in ‘14, ‘16 and ‘18).

North Allegheny has its own returning All-State first team player in 5-8 guard Lizzy Groetsch, a Penn commit. The four-year starter averages 16.1 ppg and has a 102-8 career record. She is joined by fellow senior Paige Morningstar, a two-year starter and standout volleyball player bound for Louisville.

Matchup >> Spring-Ford and North Allegheny have their share of similarities, starting with the star power of Olsen and Groetsch. Groetsch is coming off a 24-point game in the semifinal win over Cumberland Valley, but will meet her toughest test of the year in Tiffan. That matchup could go very far in determining Friday’s outcome. Both teams are sprinkled with complementary shooters – Boyer and Azzara have hit crucial 3s for the Rams of late.

Hot starts have been consistent for Spring-Ford in the postseason, a trend that will be tested when playing away from home for the first time since March 3. The different optics of the spacious Giant Center and the typical nervy starts you see in state finals only tests that further.

NA has a better taste for the road recently with two of its past three games (the WPIAL final and PIAA semifinal) at neutral sites.

North Allegheny brings the press on defense and will try to disrupt the Rams’ rhythm. Fortunately for SF it has shown excellent ball security all season, especially with the ‘hands team’ of Olsen, Boyer, Tiffan, Azzara and Pettinelli it’s utilized to preserve wins in the fourth quarter.

“They want to get you making mistakes, make you speed up your process and force passes, force shots so they can run the floor,” McDaniel said of the Tigers. “As it was (in the semifinal vs. Nazareth), poise is going to be key. We’ve gotta keep our poise.”

Spring-Ford has committed to half-court defense like never before and the disciplined approach paid off with crucial stops late to preserve the 3-point win over Nazareth on Monday.

Feeling that late-game pressure will only benefit the Rams according to McDaniel.

“A game like that does nothing but help. It helps you prepare to be in that situation and there’s nothing better than that,” he said. “If we have that similar game Friday night, we’ll be prepared for it.”

North Allegheny on the other hand hasn’t had a truly tight game in the fourth quarter since a Feb. 12 win over Class 5A finalist Chartiers Valley.

Talent gets a team to Hershey. Ability to rise to the biggest occasion is what has it lifting the trophy in the end.

“We’re going to go through some ups and downs in the game, but every game we go through, they always find their way standing back up,” McDaniel said. “It’s going to be that type of game.”