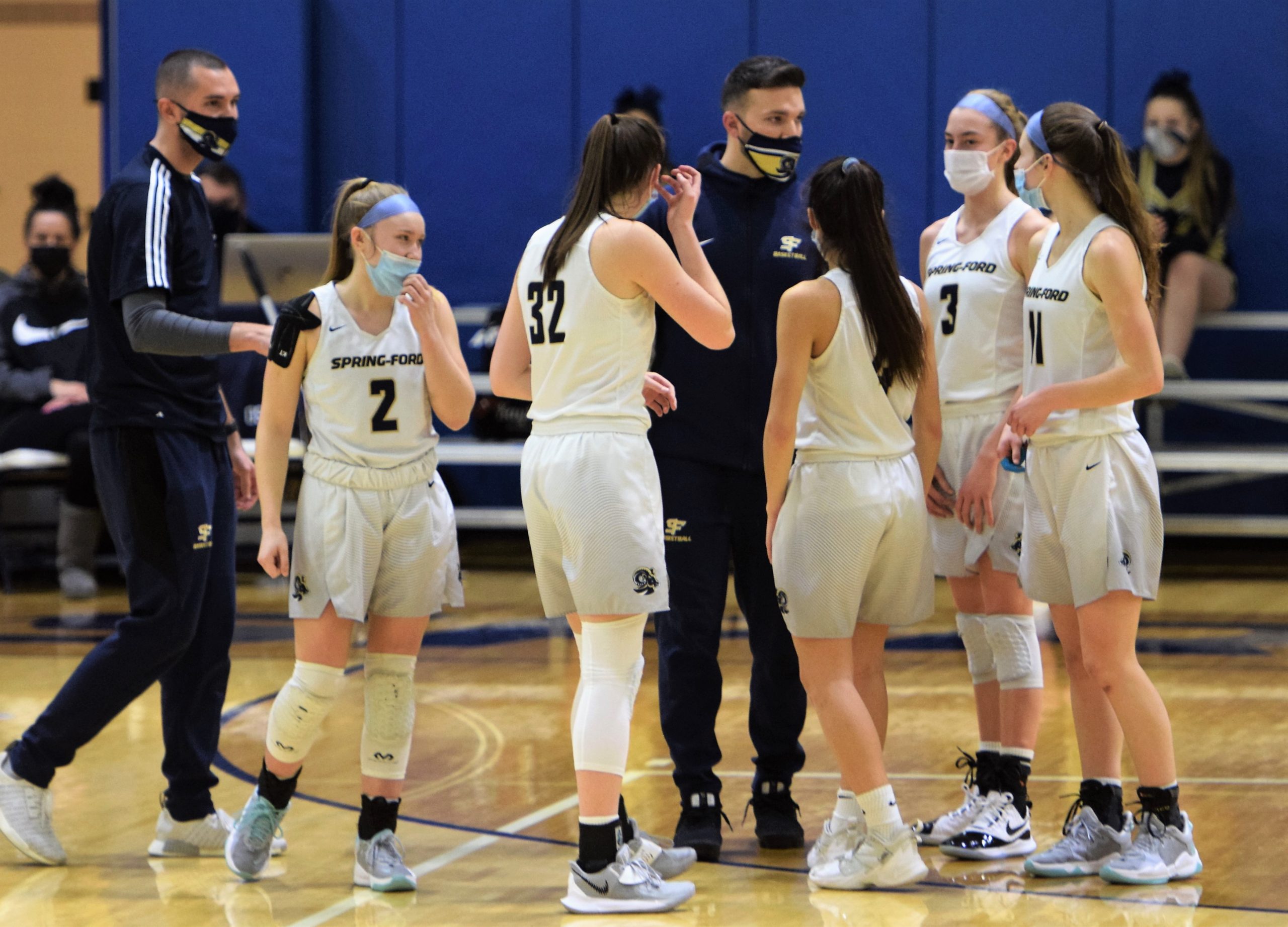 ROYERSFORD >> Mickey McDaniel is quick to admit, he wasn’t always a good delegator.

“One of the great challenges for me, whether it’s athletic director, whether it’s coaching or whether it’s at home, is delegating,” McDaniel said. “It’s always been hard for me because you have things in your mind and you want to do them a certain way.

“It’s come later in my life, but I’ve realized how important delegating is.”

It’s always been a hands-on approach for the longtime Spring-Ford athletic director and girls’ basketball coach who is in his 8th year as head coach after serving as an assistant under Jeff Rinehimer from 1995-2013.

Whether it’s wisdom with age or simply knowing the quality of his assistants, the collaborative effort on the Rams’ coaching staff has been a key player in the team’s run to Friday’s PIAA 6A championship game against North Allegheny at Giant Center in Hershey.

The last time Spring-Ford girls basketball reached Hershey – the 2013 4A championship and 2014 runner-up finish – a staple of the defensive identity crafted by McDaniel was the full-court press.

It will always be in McDaniel’s blood.

But assistant coaches Dan Brittingham, Phil Roche, Marisa Moley and Matt Labich saw the writing on the wall in the regular season: the Rams’ best path forward was a commitment to half-court defense.

It’s hard to argue against their hunch.

Spring-Ford has held opponents to a 37.0 points per game average in the postseason (31.3 for the season). The half-court commitment was never more crucial than the key stops late in Monday’s 46-43 semifinal win over District 11’s Nazareth and was the swing factor of the Rams’ poorest shooting night of the postseason.

“It goes back to the PJP game (34-30 win on Feb. 17), we decided we’re going to take a different approach for a number of different reasons because we saw we have to be really good in the half court and since then they’ve been really good,” Roche said. “They’ve been diligent about paying attention and understanding what the other teams want to do, who their best player is and where they want to get the ball and being really diligent about taking that away.”

A collaborative effort can only succeed with a listening leader, which the Rams have in McDaniel, according to Roche.

“Mickey being willing and open to a lot of different stuff is so important,” Roche said. “It’s not always been ‘We’re going to do things one way.’ At the same time with great power comes great responsibility so it puts a lot on us. So we have to deliver.”

The passion the five coaches show for game planning, video study and fundamental details has all been part of the road to Hershey.

“I think how into it they are makes us want to be more into it,” said senior standout Lucy Olsen. “They all have good basketball IQ. They all add to each other. They help us get prepared before and during the game, they help us adjust, and after the game they really help us watch film on the previous game to fix whatever we made mistakes on to improve for the next game.”

“We all devise game plans based on what the other team does, who the shooters are, who the big is, what their game plan is going to be against us to our knowledge and we just get in there and break it down,” Brittingham said. “It’s a team effort but (the players) have been unbelievable absorbing it. You have to be to get this far.”

Brittingham, a 2008 Spring-Ford grad who caught the coaching bug helping his sister’s AAU team has worked his way up from freshman team coach and a volunteer assistant, is the longest tenured of McDaniel’s assistants and handles in-game rotation.

“Dan’s a bright young coach. He’s going to be a head coach someday,” McDaniel said. “He really understands the game, loves the game.”

Roche has been Spring-Ford’s video guru for longer than his time on the bench and has a passion for learning and teaching from game film. That film study has shone through in the detail-oriented play of the Rams reaching 24-0.

Labich, who played at East Stroudsburg from 2009-12, is in his second season at S-F after previously coaching at his alma mater, Plymouth Whitemarsh.

“I’ve been a ‘drills’ guy through my career and (college) coaches say our players come well prepared because of the fundamental base that they have, but maybe there’s some times where I overdid it and the team should have been playing more,” McDaniel said. “Matt opened my eyes to that piece, that we needed to do more (game simulation).”

Moley brings a unique perspective to the Rams’ bench: she’s walked in the players’ shoes. The 2010 Spring-Ford grad played under Rinehimer and McDaniel before going on to play lacrosse at Bloomsburg.

“ I kind of handle the mental side of things for the kids, making sure their heads are in the right spot and they’re excited to play and get excited for them on the bench. I guess you could say ‘Hype man’ in a way,” Moley said.

Moley is in her fourth season and has been with the Class of 2021 players Olsen, Abbey Boyer, Hailey Hudak, Mac Maloney and Emily Tiffan since their freshmen years.

“I think throughout the four years we became so close to her,” Olsen said of Moley. “I think that also helps us (that she’s been in our shoes). She tells us stories. She tells us, ‘You have the skill, but you’ve got to work harder.’ I think because she went through it and these four years we became so close with her, she can tell us whatever and we’ll recognize she’s right. We trust her, she trusts us.”

Brittingham is quick to point out that the best game plan means little without players who can successfully execute it.

“Thinking about the past years, I’ve never ever been a part of a team that accepts the game plan and just dives into it so hard. They’re students of the game. They’re just such a team and their goals are so high,” Brittingham said. “You can tell them the game plan and they’ll be talking about it to you in practice. They ask questions that we just don’t always expect and it’s honestly incredible.”