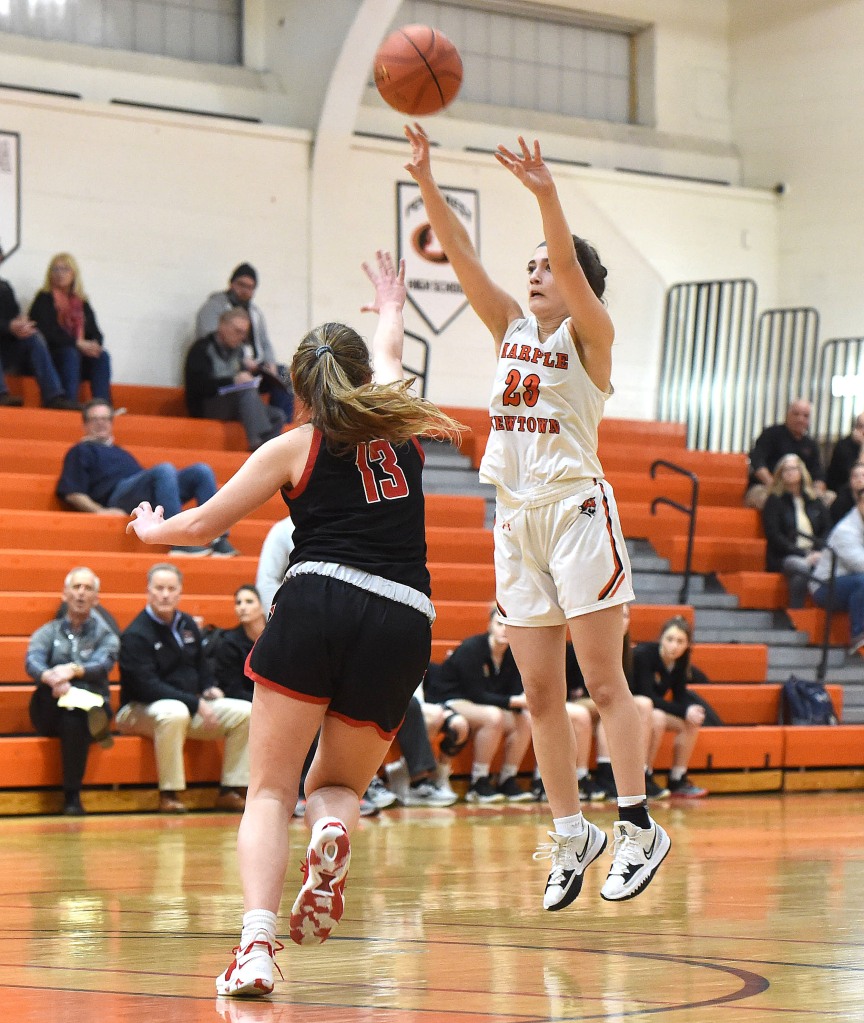 NEWTOWN SQUARE — For the first time in history, Marple Newtown’s girls basketball team is going to the state playoffs. The Tigers handled Central League rival Harriton, 34-11, to clinch fifth place in the District 1 Class 5A tournament. They own the final berth in next week’s PIAA tournament.

When the game ended, the Tigers calmly congratulated themselves, shook hands with the Rams players and made their way back to the team room.

While their collective reaction to making school history was a bit unexpected, the Tigers were beaming on the inside and immensely proud of their achievements this season. After a controversial loss in the district quarterfinals, the Tigers will meet newly minted Catholic League and District 12 champion Cardinal O’Hara in the first round of states next Wednesday.

“It’s so exciting,” said junior forward Brooke Impriano, who supplied six points, 11 rebounds and five assists. “We had a whole student section behind us and we have been practicing so hard. We were so excited to come out play this game. Girls basketball at Marple Newtown has never been this good and it’s great to be a part of it.”

Marple Newtown’s Haley Levy (15) gets a hand from teammates Nikki Mostardi  and Mary O’Brien, right, after drawing a foul in the second quarter Tuesday against Harriton.

Prior to this season the program had made steady progress under coach Ryan Wolski’s watch. Every year they’ve improved, but they hadn’t been able to get over the hump until now. There was the six-overtime loss to Penn Wood in 2020 in the first round of the district playoffs. Last week the Tigers lost on a buzzer-beater to Villa Maria. Video evidenced showed the shot shouldn’t have counted, but the officials missed the call.

So, Monday’s blowout victory was vindication for Impriano, junior guard Mary O’Brien and senior forward Haley Levy, all of whom have been starters since their freshmen years and endured the peaks and valleys. You could say that senior shooting guard Nikki Mostardi, who transferred from Archbishop Carroll following her sophomore year, was the missing piece.

“We always have another step, another accomplishment that we want to get,” said Mostardi, who had seven points and three assists. “This was definitely huge for us and it means so much. First time Marple’s been to states, it’s amazing and we’re all really proud of that.”

Marple was in full control from the opening tip, racing out to an 11-1 lead after the first quarter. The Rams didn’t make a field goal until there were three minutes left before halftime, and finished the half on an 8-3 run to go into the break down 16-10. Alas, the Rams scored only two points – from the free-throw line – the rest of the way. Harriton bricked all 18 of its shots in the second half and finished 3 of 38 for the game.

Marple Newtown’s Brooke Impriano shoots in the first quarter against Harriton. Impriano produced six points, 11 rebounds and five assists to help the Tigers claim a 34-11 win and clinch a berth in the PIAA Class 5A tournament (PETE BANNAN – DAILY TIMES)

“We only play a good, solid six players the whole season,” said O’Brien, who drilled a pair of 3-pointers for six points to go with four steals, an assist and one steal. “We’re very limited, and to think we would make the state playoffs is awesome.”

Levy scored nine points and sophomore Ellie DiBona drained two 3s for the Tigers, who closed the game on an 18-1 run. Felicity McFillin netted a team-high six points for Harriton.

“They’re tough kids,” Wolski said. “They come to work every day. They had to grind it out this year and we’ve had a lot of close games. To win 19 games and be the first team ever in Marple history to make the state playoffs is awesome for these kids and it’s awesome for our program.”

In the third-place game:

Springfield 52, Radnor 32 >> The Cougars avenged their regular season finale loss to the Raptors and rebounded nicely after a tough offensive performance in the semifinal round. Mia Valerio led the way with 18 points and Kaitlyn Kearney ended with 17.

Springfield will play the third-place finisher from District 3 in the first round of the Class 5A state tournament. Radnor will take on the runner-up from the same district.