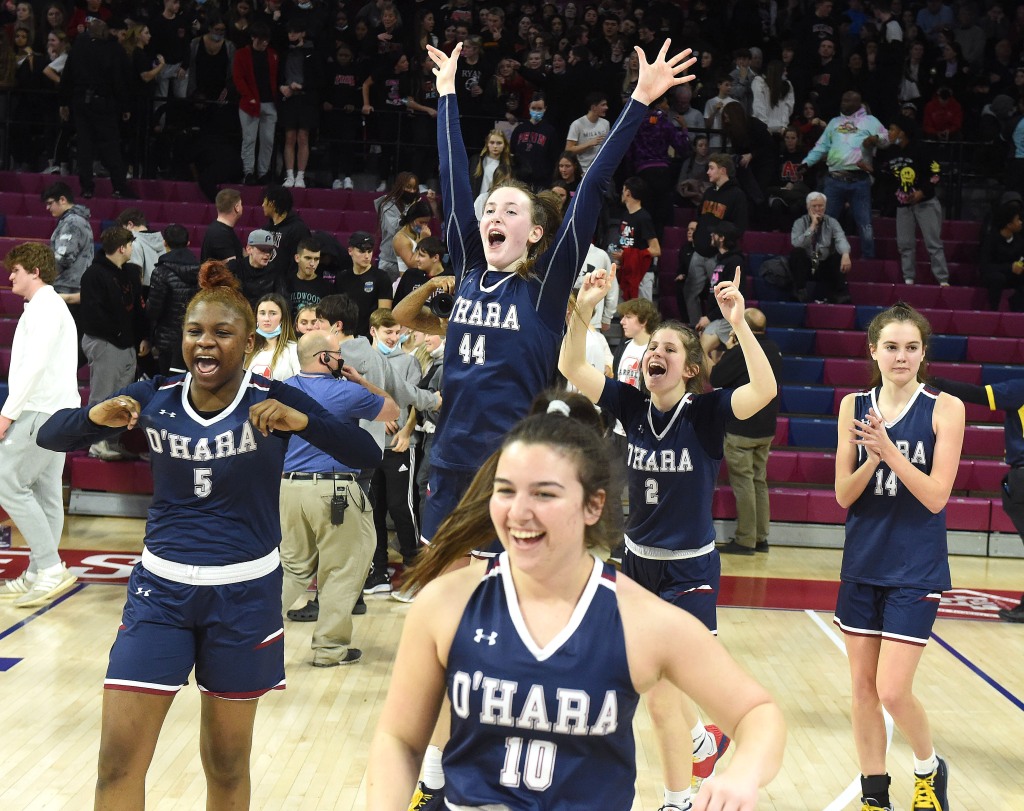 PHILADELPHIA — Last April, Maggie Doogan stood in an empty Cardinal O’Hara gymnasium and talked about the successes of her junior season.

She enjoyed the individual accolades (Catholic League MVP and Daily Times Player of the Year) and cherished the memory of helping the Lions win the program’s first PIAA championship in Hershey last March.

But there was one thing missing.

Losing in the Catholic League final to Archbishop Wood was something she vowed not to forget anytime soon. The idea of leaving O’Hara this spring would have felt incomplete if she couldn’t celebrate a league championship at the Palestra.

Doogan’s mom, head coach Chrissie Doogan, had won multiple Catholic League titles during her amazing career at O’Hara. Although Chrissie insisted that the Catholic League title wouldn’t define her daughter’s legacy at O’Hara, for Maggie, coming close wasn’t good enough. The younger Doogan embraced the pressure, and made it her primary mission in 2022 to get to the Palestra and win it all.

The work was completed Monday evening.

Behind Doogan’s 18 points, seven rebounds and three assists, O’Hara avenged its regular season loss to Archbishop Carroll with a 55-30 victory that was never in doubt. It’s O’Hara’s 19th Catholic League girls basketball title, the first since 2018, and sixth all-time against Carroll.

To make it to the Cathedral for the first time (last year’s final was held at Carroll due to the pandemic), the Lions defeated Wood in the semifinal round, completing a season sweep of the Vikings. Outside of capturing a state championship, these last two wins have been the biggest in Doogan’s storied career.

“It motivated us a whole lot,” Doogan said. “None of us ever wanted to feel like that again. It was really hard on us. Even in the semifinal game, Wood took the PCL title away from us last year, so we weren’t going to let them take it again. And then coming here, it’s our last year, it’s our last opportunity to get the plaque and we weren’t going to let anybody take it away from us.”

Chrissie Doogan was slightly worried that Maggie was thinking too much about the game over the weekend. By Sunday, she was good to go. Although her performance wasn’t the least bit affected this season, the idea of coming up short in the Catholic League remained in the back of Doogan’s mind.

Cardinal O’Hara’s Molly Rullo shoots in the second half as the Lions defeated Archbishop Carroll 55-30 for the Catholic League title Monday evening at the Palestra. (PETE BANNAN – DAILY TIMES)

“I see the pressure she puts on herself to lead this team as a champion,” Chrissie Doogan said of her daughter. “She didn’t have that last year because we had Amaris (Baker) and Siobhan (Boylan), so she just kind of played along last year. But this year was her team and, you know, there were nights where she would say to me, ‘What if we don’t win this year?’ I’m like, ‘Mags, you’re not going to be defined by whether you’re a Catholic League champion or not.’ And I said, ‘We can do it, but it’s not going to define your career.’ I told her just to play calm. On Saturday night when she was home I was like, ‘Oh gosh, she’s nervous.’ But then she woke up on Sunday and she was ready.”

Doogan opened the game with a 3-point basket to give O’Hara the lead. It ballooned to 13-2 in the first quarter. Doogan made a trey and a pair of deuces for seven points to go two rebounds and one steal, all in the first eight minutes of regulation. Without question, she was ready to go.

Carroll, the No. 1 seed which had been undefeated in league play all season, pulled within five points in the second quarter but never got closer. Sydni Scott buried a 3-pointer and Doogan hit a pair of free throws to make it 18-10. Moments later Doogan connected with Molly Rullo cutting to the basket to make it a 12-point lead. And then came the dagger: Doogan made a move inside, got fouled and scored. She completed the three-point play from the charity stripe as O’Hara expanded its advantage to 25-10.

This was an entirely different game than the one that was played at Carroll Feb. 1. The Lions struggled mightily from the field and Doogan and Scott, the Lions’ 1,000-point scorers, were held cumulatively to 13 points on 4-for-15 shooting from the field in Carroll’s 49-39 win. Monday night the Lions shot 53.1 percent (17-for-32).

“If you remember, too, our fans weren’t allowed in their gym when we played them there and they had a huge student section. I think our kids got a little rattled,” Chrissie Doogan said. “I watched the film the other day and in the third quarter we were so bad. I said to them, ‘I’m sorry.’ I didn’t call a timeout when we needed one and we weren’t ready. It’s a learning experience sometimes.”

Carroll senior guard Grace O’Neill and junior forward Taylor Wilson were kept in check Monday after scoring 15 points apiece in the teams’ regular season meeting. O’Neill had nine points and Wilson finished with four. The Patriots made just 10 of 32 field goal attempts for a paltry 31.2 percent.

“We’ve seen people play here before and you always wish that it could be you,” said Welde, who bounced back nicely after picking up two quick fouls in the first quarter. “It’s something that (few) people get to experience. We’ve played so many basketball teams, but this one was number one. We took it all in and I think we stayed together and it all finally came together.”

O’Hara will be the top team out of District 12 in the PIAA Class 5A tournament. Carroll will play a District 12 Class 6A championship game later this week against Central. Both Carroll and O’Hara are poised to make a run to Hershey next month and compete for state titles in their respective classifications.