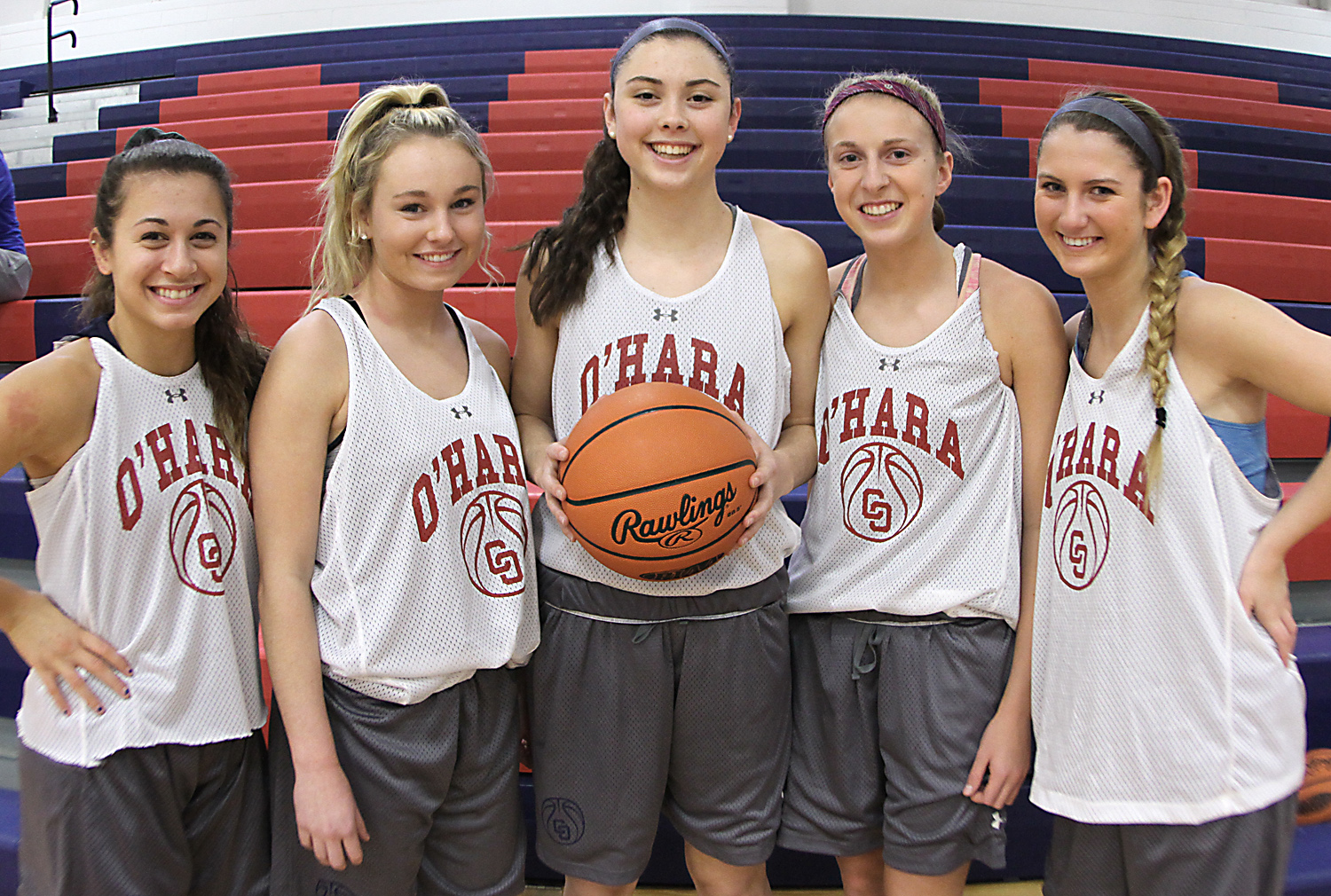 The daughter of Chris Gardler, who played basketball at Saint Joseph’s, and granddaughter of legendary O’Hara boys basketball coach, Buddy, Kenzie believes the respite from playing basketball 24-7 was refreshing. She helped the girls tennis team win the Catholic League championship.

Gardler, Nihill and Hendrixson were busy while junior small forward Mary Sheehan and Molly Paolino were on the hardwood, participating in open gyms and preparing for the winter ahead.

Once the fall sports season ended, it was back to basketball for Gardler, Nihill and Hendrixson. It was good to get the band back together again.

“The thing with us, we have three girls that play fall sports, so we didn’t exactly play with each other through open gym a lot in the fall. But that’s what’s amazing about our team,” said Sheehan, an All-Delco last year along with Nihill. “Since we all played with each other last year, we kind of just jumped right back into it and picked up where we left off. The first day of practice was awesome, we jelled right away.”

In the summer, the Lions’ starting five of Nihill, Gardler, Paolino, Hendrixson and Sheehan — who were the starting five last year, too — kept in game shape with their AAU Comets teams, winning tournaments all across the states.

“Since we’ve been playing all summer, it was nice to get a little break in the fall,” Nihill said. “When I’m playing field hockey, I also wish that I can be out on the court with them and practicing. But I feel like the break is nice and gives us all a fresh start when basketball season begins.”

So, here they are, together again. And the scary thing is, they’ll be together next season, too, when Nihill and Sheehan are (finally) seniors. They’ve been acting like upperclassmen since their freshmen year, though.

The Lions are the No. 1 team in Delaware County and other publications have them as high as No. 2 in Southeastern Pa. With all their pieces back in place, the Lions look to take the step next step in their journey of becoming the best Class AAAA team in the state. Last year, the Lions fell to Palmyra in the third round of the PIAA tournament and finished with a 22-6 record.

“There’s nothing in our heads about the past. As freshmen, we played in our first state game and got killed. With us, there was no pressure on last year,” Sheehan said. “So, we went out there and won two games (in the state tournament), made it to quarters and we competed. You can say there’s pressure … but we know that if we have fun, we can do what we’re capable of doing.”

The Lions were so young last winter that perhaps some teams didn’t take their immense talent seriously enough. That won’t be the case in 2015-16.

Cardinal O’Hara’s Mackenzie Gardler is part of a veteran core with high hopes for this season. (Times Staff/Robert J. Gurecki)

“That’s what I think the motivation is, that people are going to be out to get us this year and we’ll live on that,” Paolino said. “We’ll give it all we have against any team we play.”

O’Hara begins its season Sunday against Bishop Ireton (Va.) at the Spring-Ford Tip Off Classic

“I think it’s important to keep the underdog mentality,” Sheehan added. “We can’t think that we’re supposed to win. If you think that, anyone can beat anyone. We saw some upsets last year and that can happen again.”

During the offseason, Sheehan and Nihill decided where they’ll be playing in college in two years. Sheehan committed to St. Joe’s. Her father, grandfather and several other relatives attended the school. Her dad was the Hawk mascot in his time.

“I started going to camps when I was 4 and I’ve known Coach (Cindy) Griffin pretty much my whole life. It’s a real comfort level,” Sheehan said. “I fall in love with the place every time I’m there.”

“I love the city,” she said. “I’m going to have to work on my parallel parking.”

Stewart is looking forward to the return of senior Princess Clemons, who missed all of last season due to injury. Clemons averaged nine points per game as a sophomore.

“Our level of success will depend on how fast the young players develop and are comfortable in their roles,” Stewart said.  “Hopefully the returning starters and the return of Princess will give us some stability until the other players are fully ready.  We intend to be a playoff team again this year.”

Thomas Nerney, a former Cabrini College great and AAU coach of nine years with the Philadelphia Belles, begins his first season at Archbishop Carroll. Despite multiple requests, no further preseason information was made available to the Daily Times.

Nerney takes over for Chuck Creighton, who stepped down in April after winning two PIAA championships in nine seasons.