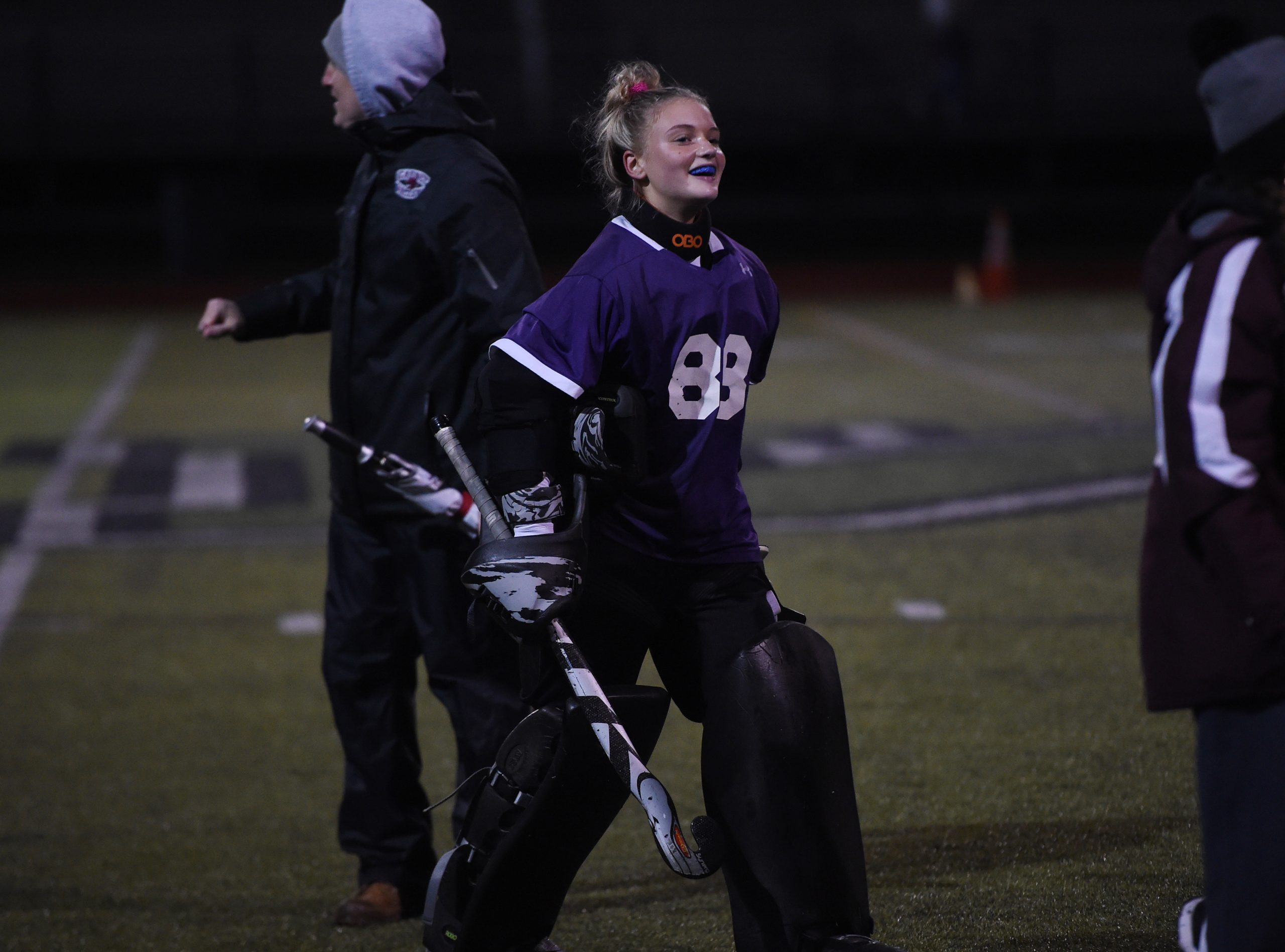 FAIRVIEW VILLAGE >> When asked about her shootout experience, Alana Poole quickly replied that she did indeed have some.

“Yea I have about three times,” the Garnet Valley junior goalie said. “It was all in middle school.”

“Just keep breathing and focus on the ball,” were the lessons she took with her from those moments long ago, and they worked at the high school level too.

Alyssa Smith, Riley Gallagher, Theresa Ricci and Natalie Ricci converted all four Garnet Valley penalties while Poole came up clutch, saving two of the five shots she faced in a penalty shootout to deliver the No. 7 Jaguars a 2-1 (4-3 shootout) win over No. 6 Methacton in the District 1-3A semifinals.

Garnet Valley will play top-seeded Conestoga — a 2-1 winner over Downingtown West — in its first district title game Saturday at 6 p.m. back at Methacton.

“It was awesome,” said Garnet Valley junior Theresa Ricci, who scored one of the game’s lone goals. “This is the furthest we ever made it as a Garnet Valley school field hockey team. We grew up playing together, so it’s really emotional and brings up memories from when we were younger and dominating that. It’s fun. It was a great win.”

Garnet Valley’s Alana Poole looks to the official after making the winning save against Methacton on Tuesday in the District 1-3A semifinals. (Owen McCue – MediaNews Group)

Garnet Valley players celebrate their shootout win over Methacton in a District 1-3A semifinal on Tuesday. (Owen McCue – MediaNews Group)

In a contest with ample opportunity on both sides (15 Methacton corners, 12 Garnet Valley corners), both teams could only muster a goal each through 60 minutes of regulation and two 10-minute overtime periods.

After a first-half dominated by Methacton (7-1 corners), the Jaguars took control in the third period (7-0 corners), but the score remained scoreless heading to the fourth.

Garnet Valley finally broke through for the game’s first goal with 12:42 left in the game when Theresa Ricci stole the ball at midfield and took it down the field herself to score.

“We didn’t change anything,” Ricci said. “We just decided that we wanted it, and we played like we wanted it. Their goalie did have a good game.”

The Warriors gained back some momentum in the middle of the fourth, earning five corners before Elena Snodgrass finally scored on one of them with 5:29 to play in regulation.

“We’ve had a huge mindset change where we might be a goal down or two goals down, but that doesn’t mean we’re out of the game,” Methacton coach Amanda Fuertsch said. “The girls really have the mentality that they’re going to fight back in it if they do get in that goal-down situation.”

Methacton goalie Gabby DiPrinzio goes to kick a ball away from the cage Tuesday against Garnet Valley in a District 1-3A semifinal. (Owen McCue – MediaNews Group)

Garnet Valley had three corners to try and find the winner in the first extra period. The teams expended all of their energy by the end of the second overtime — both getting balls in front of the other teams’ cage — before eventually heading to a shootout.

Maura Greek saved five shots in the first half for the Jaguars, before Poole saved three in the second half and overtime leading up to her shootout heroics. Nicolette Saccomandi and Natalie Ricci also had defensive saves.

“It was definitely intense,” Poole said. “I think we did really good communicating and staying focused and just wanting it more.”

Warriors goalie Gabby DiPrinzio saved six shots and was helped by the defense of Elise DeWan, Kirsten Riddell and Nicole Uebele among others who were laying out their bodies all over the field.

Methacton fell to Plymouth Whitemarsh in overtime in last year’s district semis, but unlike last year the Warriors’ season will continue with a 3rd/4th place game against Downingtown West on Friday before the PIAA playoffs next week.

The Jaguars’ district run continues Saturday back at Methacton where they hope to make more history.

“I think just working even harder at practice and staying focused on moving further,” Poole said of the key to the school’s first district title.

“We want more than we have right now,” Ricci added.