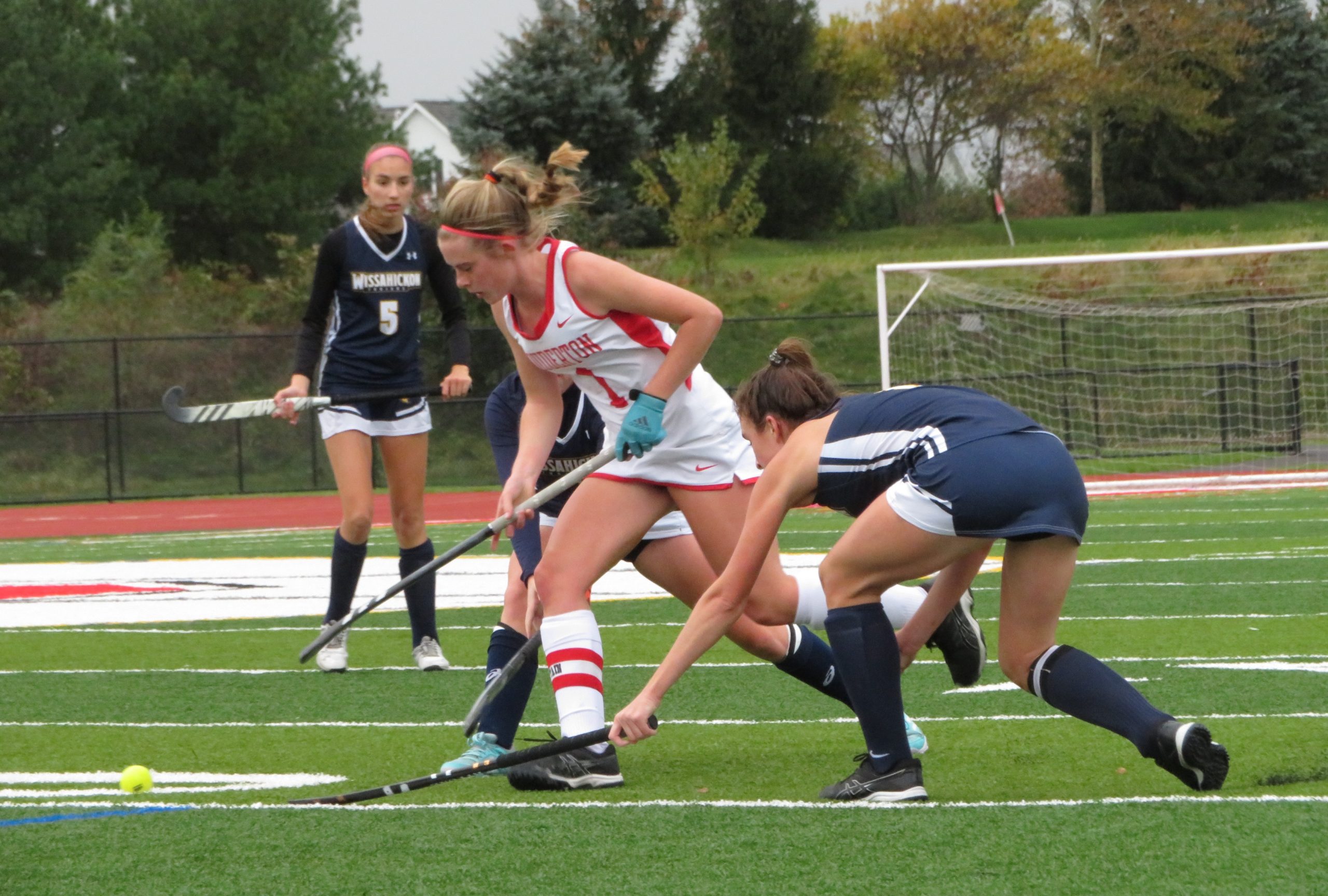 FRANCONIA >> Goals have suddenly become a hard thing to come by from the Souderton field hockey team.

And while the Indians could only find a way to put the ball into the cage just once Tuesday afternoon, it was still one more than they allowed visiting Wissahickon.

Kenah, a University of Virginia commit, scored less than five minutes into the District 1-3A playback and No. 2 seed Souderton made the goal stand up to edge the No.  3 Trojans 1-0 and secure a spot in the PIAA tournament.

“We did get past their goalie a couple of times, there were a few balls right on the goal line and we just couldn’t poke them in,” Souderton coach Sue Casciato said. “I would hope soon we’re going to start scoring goals in droves or something. It’s just, we’ve really struggled.”

Souderton’s Ang Borisow (9) tries to knock the ball away from Wissahickon’s Ella Hummel (27) during their District 1-3A playback on Tuesday, Nov. 2, 2021. (Mike Cabrey/MediaNews Group)

With both teams coming off upset losses in the district quarterfinals, the SOL Colonial Division champ Indians (19-2) out penalty cornered SOL Liberty winner Wissahickon 20 to 1 but Big Red could not convert on any despite a couple quality chances that came from them.

Kenah’s early strike ended up being the day’s lone tally, floating a shot in at 10:04 in the first quarter off an assist from Reiley Knize.

“We’ve been working on our corners all season I feel like and sometimes I feel like they’re on and other times they’re off,” Kenah said. “Unfortunately today I think they were off. And that’s definitely something we need to work on going into states and I think we know that.”

The victory clinches Souderton’s third PIAA appearance in four seasons as it returns to the state 3A field after back-to-back appearances in 2018 and 2019.The Indians, who bounced from a 3-1 loss to Garnet Valley that snapped their 17-game win streak, host No. 4 Great Valley – which beat No. 8 Kennett 1-0 in the fifth place game 3:30 p.m. Friday.

Wissahickon goalkeeper Julianna Thomas (91) makes a kick save during the Trojans’ District 1-3A playback against Souderton on Tuesday, Nov. 2, 2021. (Mike Cabrey/MediaNews Group)

“And we went out to breakfast this morning cause we didn’t have school and we all kind of reconvened and we’re like we have a lot to accomplish still.

District 1’s fifth place side takes on the District 11 champ in the opening round of states Tuesday, Nov. 9 while sixth place faces the Region 3/6 champ.

“We obviously thought we had a shot to win districts this year but not meant to be,” Casciato said. “I said if we can win on Friday we still had a 20-win season, that’s nothing to be ashamed of but it’s just a missed opportunity but that happens.”

Wissahickon’s Brynne Miller (3) knocks the ball away from Souderton’s Lauren Kenah (1) during their District 1-3A playback on Tuesday, Nov. 2, 2021. (Mike Cabrey/MediaNews Group)

Wissahickon (18-3), which had won nine straight before falling to Methacton 4-1 in the quarters, can still earn its first PIAA berth since 2012 when it hosts Kennett 3:30 p.m. Friday in the district seventh-place game. Winner faces the District 1 champ in states with the losing side having its season come to an end.

“I think we can do it,” Trojans senior goalkeeper Julianna Thomas said. “I just think we need to really, really want it and I think we do. So if we keep the intensity, if we just keep moving then we’ll get there.”

Posting 16 shutouts and allowing a total of 15 goals in its first 20 games, the Wissahickon defense put together another solid effort Tuesday. The Trojans denied Souderton a few times at the goal line while keeper Thomas made 11 saves, including stopping Kenah on a penalty stroke in the fourth.

“It was nervous but again just wanted it more than they do really helps us in that aspect” said Thomas of Wissahickon’s corner defense. “And I think our strategy worked every time. At least I didn’t notice a change in a lot of their corners and so it was just predictable.”

Souderton’s Grace DeMarzio (8) and goalkeeper Tegan Farina leap in the air to celebrate the Indians’ 1-0 win over Wissahickon in their District 1-3A playback on Tuesday, Nov. 3, 2021. (Mike Cabrey/MediaNews Group)

Thomas took down Kenah to give Souderton a penalty stroke with 11:16 in the final quarter but the goalie kept the Trojans within a 1-0 by extending to make the save with her right hand.

“I try and look at the angle of their stick and just going wherever I feel is right,” Thomas said.

The Indians finished with one goal for the second straight game after being held to one just twice in the regular season. But it was enough to get past the Trojans as Knize, from inside the circle, sent a ball back to Kenah, who lifted a shot that bounced into the cage 4:46 into the contest.

“It was huge,” Kenah said. “On Friday (against Garnet Valley) we were behind the whole, entire game – we were tied at one point but we were never up and I think for us it’s huge for us to be up in the score. So I think we know it was going to be important this game to carry momentum and momentum for us is being up.”

The Indians could not score on their corners but they did come close starting in the first quarter when Thomas dove across the front of the cage to get a touch on the ball before Souderton’s Ava Jones.

Wissahickon’s lone corner came in the second quarter with Brynne Miller’s shot from the top of the circle kick-saved by Big Red goalie Tegan Farina, who finished the game with two saves.

Souderton’s Grace DeMarzio (8) and Wissahickon’s Kayla Pak (21) chase after the ball during their District 1-3A playback on Tuesday, Nov. 2, 2021. (Mike Cabrey/MediaNews Group)

On the seventh of Souderton’s eight first-half corners, a Kenah shot from the left side of the circle took a deflection but the ball went wide of the left post.

“If the insert is good then we don’t stop it then we have sometimes insert isn’t good then we get a good shot off but hit one of our own players,” said Casciato of the corners. “We’ve tried different things and I know they said they knew by the end what we were going to do in our corners, I’m like we were out of plays.”

The Indians created another chance on the first of their eight third-quarter corners as Ang Borisow’s redirect of a Lauren Frye shot could not sneak in at the near left post. Souderton was given another corner but Frye’s rip from the top of the circle was blocked by Thomas then cleared by the Trojans.