Kenah, Knize both score 2 goals, Souderton tops Neshaminy in District 1-3A 2nd round 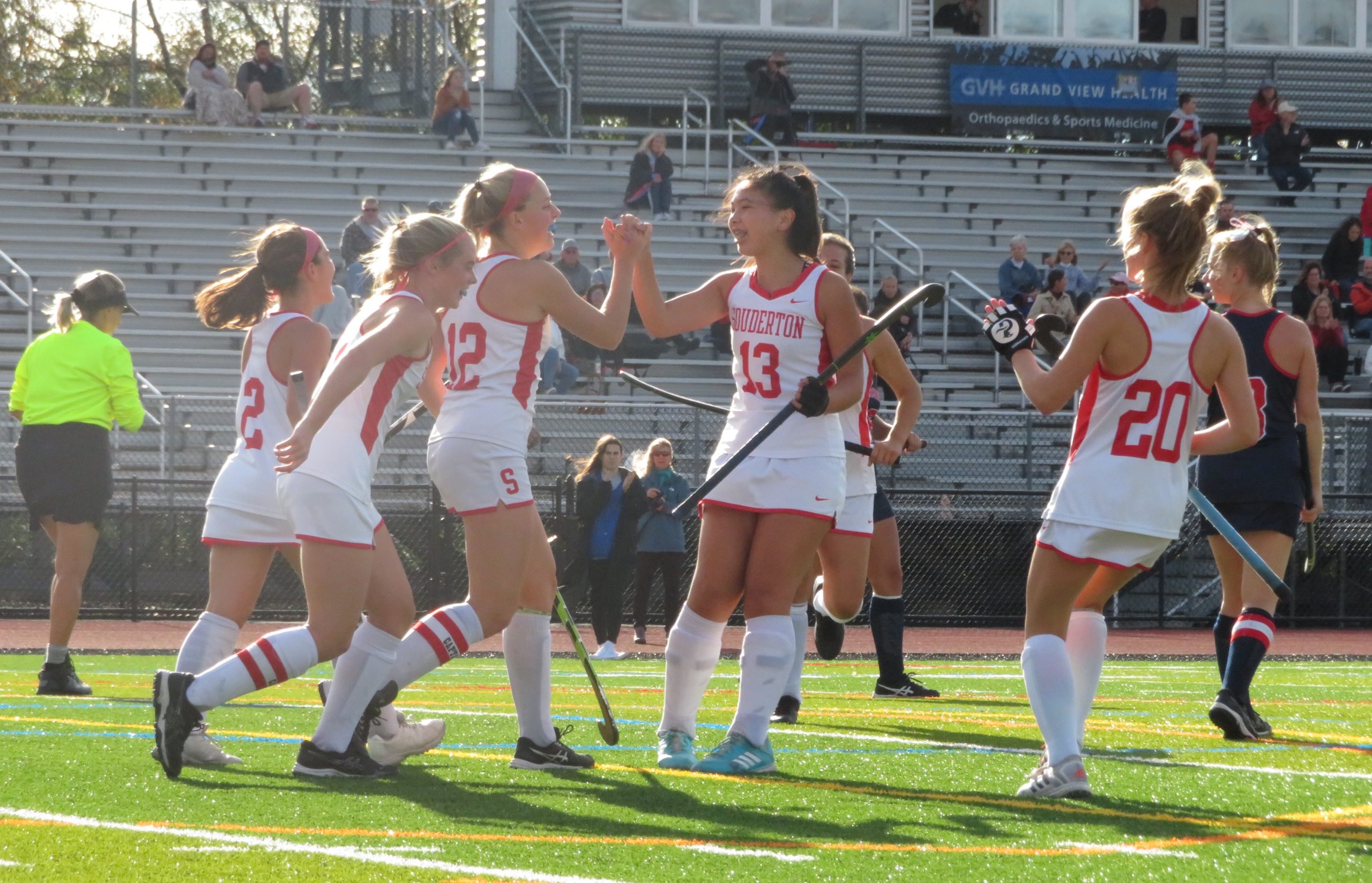 Souderton's Reiley Knize (12) and Olivia Nogami (13) high five after Knize's goal in the second quarter of the Indians' District 1-3A second round game against Neshaminy on Wednesday, Oct. 27, 2021. (Mike Cabrey/MediaNews Group)

FRANCONIA >> Lauren Kenah made sure the Souderton field hockey team came away with something from the first quarter.

On a penalty corner a time expired in the period, Kenah got a stick on Lauren Frye’s shot from top right of the circle, the redirect from the Virginia commit bouncing the ball into the back of the cage for a 1-0 lead over visiting Neshaminy in their District 1-3A second-round matchup Wednesday afternoon.

“It was awesome,” Kenah said. “She sent a perfect ball in and I was right on pads and got a good touch on it.”

Kenah’s tally gave the second-seeded Indians the productive start they were looking for in their postseason opener. Reiley Knize carried that over into the second quarter, scoring twice to give Big Red a 3-0 halftime lead before Kenah struck again in the fourth as Souderton advanced with a 4-1 victory over No. 15 Neshaminy.

Souderton’s Lauren Kenah (1) reaches out for the ball during the Indians’ District 1-3A second round game against Neshaminy on Wednesday, Oct. 27, 2021. (Mike Cabrey/MediaNews Group)

“I think we came out super-strong in the first half and I think that’s something we’ve been working on all season,” Kenah said.” Our coach always says tried to get a corner or a goal in the first two minutes. I think we emphasized that today, especially having a bye, I think it was important for us to come out strong and show that we can win the game.”

Frye collected a pair of assists as the Indians (18-1-0) picked up a second win over Neshaminy (14-6-0) this season, having posted a 6-0 shutout on the same field in the Suburban One League crossover game Oct. 4.

The victory Wednesday was Souderton’s 17th straight as it reached the district quarterfinals for the third time in the past four years.

“We just kept saying we wanted to be confident but not overconfident,” Knize said. “We just wanted to go in as it was a playoff game and we’ve played them before, we beat them before but we have to beat them again to be able to go to the next round so it was like don’t get too cocky.”

FIELD HOCKEY: 0:00 Souderton 1, Neshaminy 0. Souderton strikes on a corner as time ends 1Q, Lauren Kenah redirecting in a shot from Lauren Frye from the right side of the circle. pic.twitter.com/qmcaTFQ8hC

The Indians host No. 7 Garnet Valley – which topped No. 10 Central Bucks South 2-0 – 3:30 p.m. Friday with the winner getting a spot in the semifinals and also clinching one of District 1’s seven berths into the PIAA-3A tournament.

“We kind of talked about this at the beginning of the season and we said this is our senior year we want to go off with such a strong ending,” Kenah said. “So the team is really, really excited about it and we’re super excited about Friday.”

Souderton fell in the quarters in both 2018 and 2019 before rebounding both years to make states as a sixth-place finisher. But the Indians are out to get past the round of eight this time around and claim their first District 1 title since 2005.

“I definitely think we’re there, I think we got this this year,” Knize said. “I think our team is just so cohesive and I think everyone’s working together really well and I think this is definitely our year.”

Souderton Reiley Knize (12) drives down the field during the Indians’ District 1-3A second round game against Neshaminy on Wednesday, Oct. 27, 2021. (Mike Cabrey/MediaNews Group)

Since falling to Souderton Oct. 4, Neshaminy – which was looking to reach the district quarters for a second consecutive season – had won seven of its last eight and was on a six-game win streak after edging No. 18 Unionville in the first round Monday.

In their meeting earlier this month, Neshaminy kept things scoreless until Souderton’s Ang Borisow had two goals in the final minute of the first half. The Indians’ offense found quicker success Wednesday – Kenah scoring with no time at the end of the first quarter with Knize making it 2-0 less than three minutes into the second.

“The funny thing is we watched the video of the game we played previously  and we thought we had a really solid 6-0 win and we realized we didn’t score until there was a minute left in the first half in that game,” Souderton coach Sue Casciato said. “They hung around a long time in that first game and today it’s a good thing we scored in the first half because they were beating us to the ball at the end of the game.

“Our team usually does not get tired and some of our girls looked a little winded at the end there. But it was a good team win and some good passing. See what happens, moving on.”

FIELD HOCKEY: 5:12 2Q Souderton 3, Neshaminy 0. Souderton converts on a corner, Reily Knize scoring her 2nd by putting a ball in at the right post off a shot from Lauren Frye. pic.twitter.com/2yDsx1rGl5

Souderton took a 4-0 lead in the fourth before Neshaminy avoided being shut out again by scoring with 5:25 remaining in regulation.

On a corner, a blast by Avery McGinty was blocked by Indians goalie Tegan Farina. Neshaminy could not get the loose ball in and Farina kicked it to the right of the cage. Neshaminy’s Mia Martin, however, sent the ball back to the front of the cage and Emily Papeo knocked it in.

“That initial shot was a rocket from the top,” Casciato said. “I mean Tegan stopped it and then there was a deflection but, you know, you can’t hit a ball much harder than that.”

Knize put Souderton up 2-0 in the second quarter as the senior – who has committed to play lacrosse at Bloomsburg – drove in from the left side of the field and sent in a shot in at 12:32.

“I just didn’t want to pass it back, I just want to get it in” Knize said. “I get the goal in and then get the momentum going so I was like if we get one goal then we keep going from there.”

Knize scored her second for a three-goal Indians lead on a corner with 5:12 left in the half. Kenah received the ball at the top of the circle then passed left to Frye, who let go a shot that found Knize near the right post. Knize proceeded to put the ball past the diving goalkeeper.

“We usually just practice that in practice so I was like just stay on post with my stick down and if I’m there, I’m there,” Knize said. “And I was there.”

After a scoreless third quarter, Kenah made it 4-0 Indians, scoring on a corner for her second tally by lacing a shot into the cage’s right corner at 8:07.

“It was a perfect insert and just got a good rip off,” Kenah said.

Wissahickon’s defense leads the way against Avon Grove in District 1-3A 2nd round
Kennett advances after overtime thriller against Boyertown
Loading Comments...
Comment
×