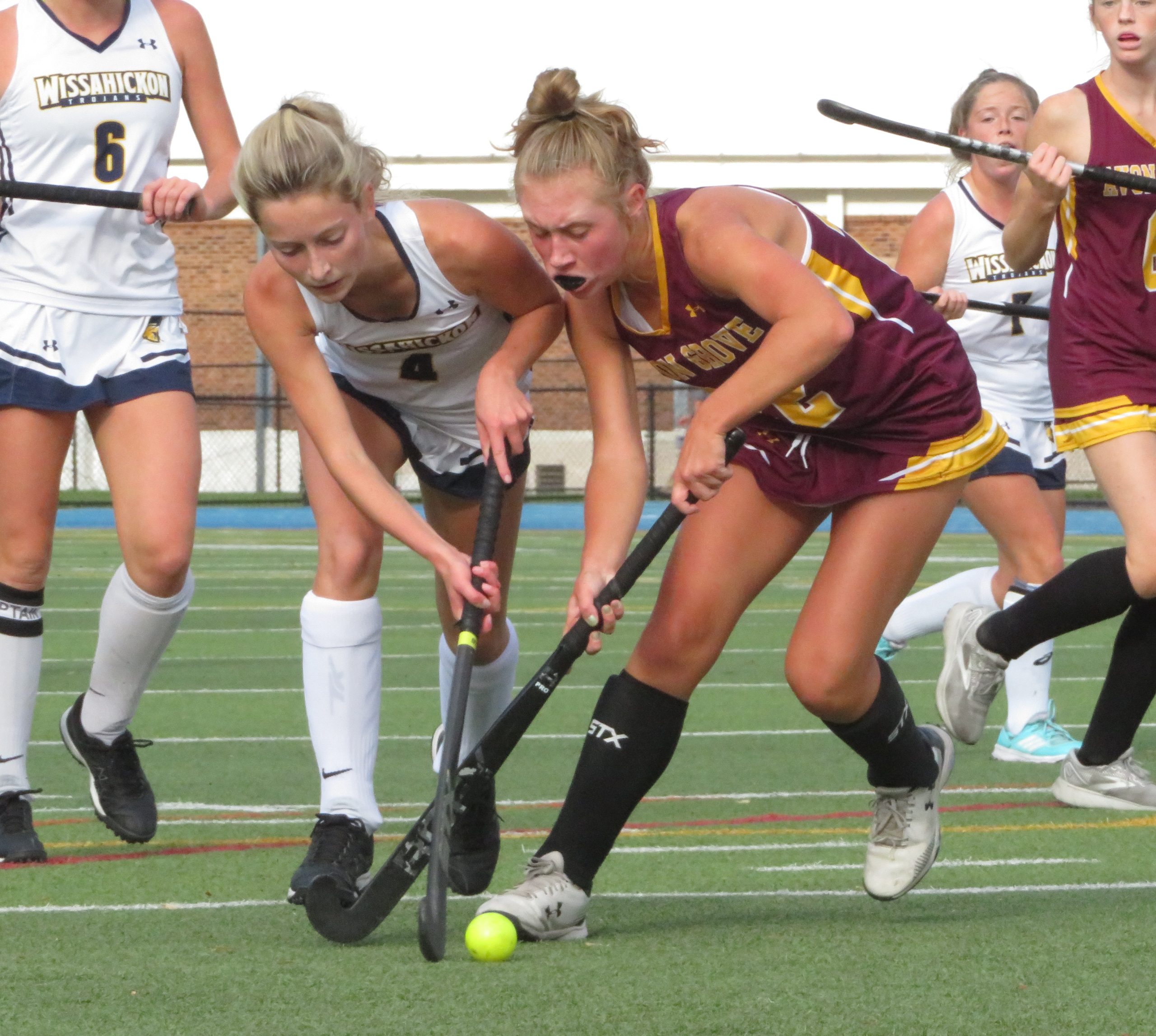 LOWER GWYNEDD >> Wissahickon’s defense and goaltender Julianna Thomas were under pressure early and often Wednesday afternoon, but were up to the challenge in their District 1-3A second round matchup with Avon Grove.

The third-seeded Trojans stopped all six Avon Grove penalty corners in the first half and made three key defensive plays in the final minutes to hold on for a 2-1 win at Wissahickon High School.

“We just have to talk and make sure everyone is picking up the most dangerous girl,” Wiss captain Julia Schools said of defending corners. “All the girls who are on the 50 come back as fast as they can and they mark. We were just doing everything we could to keep it out of the goal.”

Early in the fourth quarter, Madison Britton came close to tying the game for No. 14 Avon Grove. Britton, who scored in the third quarter to make it 2-1, got a good look from the right side of the cage. Her shot beat the defense and goaltender, but hit the post and deflected towards the sideline.

Thomas made one of her biggest saves of the afternoon with just under nine minutes to go. Her denial turned into a fast break for the Wissahickon offense, but Avon Grove goalie Brooke Benjamin made back-to-back saves to keep it a 2-1 game.

The Red Devils earned a corner, their first and only of the second half, with two minutes left in the game. Wiss midfielder Caroline Kirkpatrick stopped the shot in front of the cage and cleared it out of harm’s way.

Twenty seconds later, Avon Grove was threatening again.This time it was Wissahickon’s Faith Jampo who stepped up and stopped a fast break.

The Red Devils final opportunity came with 35 seconds left. They sent a strong pass into the circle, but Schools was there to deflect it out of bounds. Before Avon Grove could restart, Wissahickon’s defense got into position and didn’t allow another scoring opportunity. The final buzzer sounded and the Trojans celebrated their district playoff win.

“We just always want to make sure we’re marking,” Schools said of the final defensive stops. “They had one girl who could dribble through a lot of people. We just wanted to focus on giving her space and not letting her cut around us. We protected our feet and tried to not give up any more corners.”

“Julia and Faith and Brynne (Miller) and Caroline and Julianna had a great game,” Wissahickon coach Lucy Gil said. “All of them were playing their best – out of their minds. The corner defense was really, really solid today against a superb offense. They’re used to scoring a lot of goals, and we were able to shut them down pretty much. They did their jobs today.”

Thomas has been filling in for starter Alli Wood over the last few weeks and made eight saves against Avon Grove.

“Julianna has stepped in so nicely,” Gil said. “She’s been playing amazing. She has like a 95% save percentage and like 10 shutouts. She’s just slid right into that role and is doing great.”

Wissahickon advances to the district quarterfinals Friday. The Suburban One League Liberty Division champions will host the winner of No. 6 Methacton and No. 11 North Penn.

The Trojans built a 2-0 with goals in the second and third quarters. Kendall Crowley put her side ahead when Kate Lovensheimer passed into the circle and she deflected a shot off the goalie and into the back of the cage. Riley Ball doubled the lead in the third when she finished an Ella Hummel pass.

Britton cut Avon Grove’s deficit in half later in the third. She gained possession in the middle of the circle and put a strong shot into the cage.

“We definitely came out and represented the Ches-Mont League today,” AG coach Giulz Antignani said. “Putting Avon Grove back on the map. It was a hard 2-1 loss. We knew they were going to be good because they averaged at least like three goals a game. I’m happy we held it 2-1.

“I think this is the first time in the last six or seven years that we made it to the second round of playoffs. Overall this season we had great wins. Maybe only six losses, so that’s pretty good in 19 or 20 games. I’m really proud of them.”