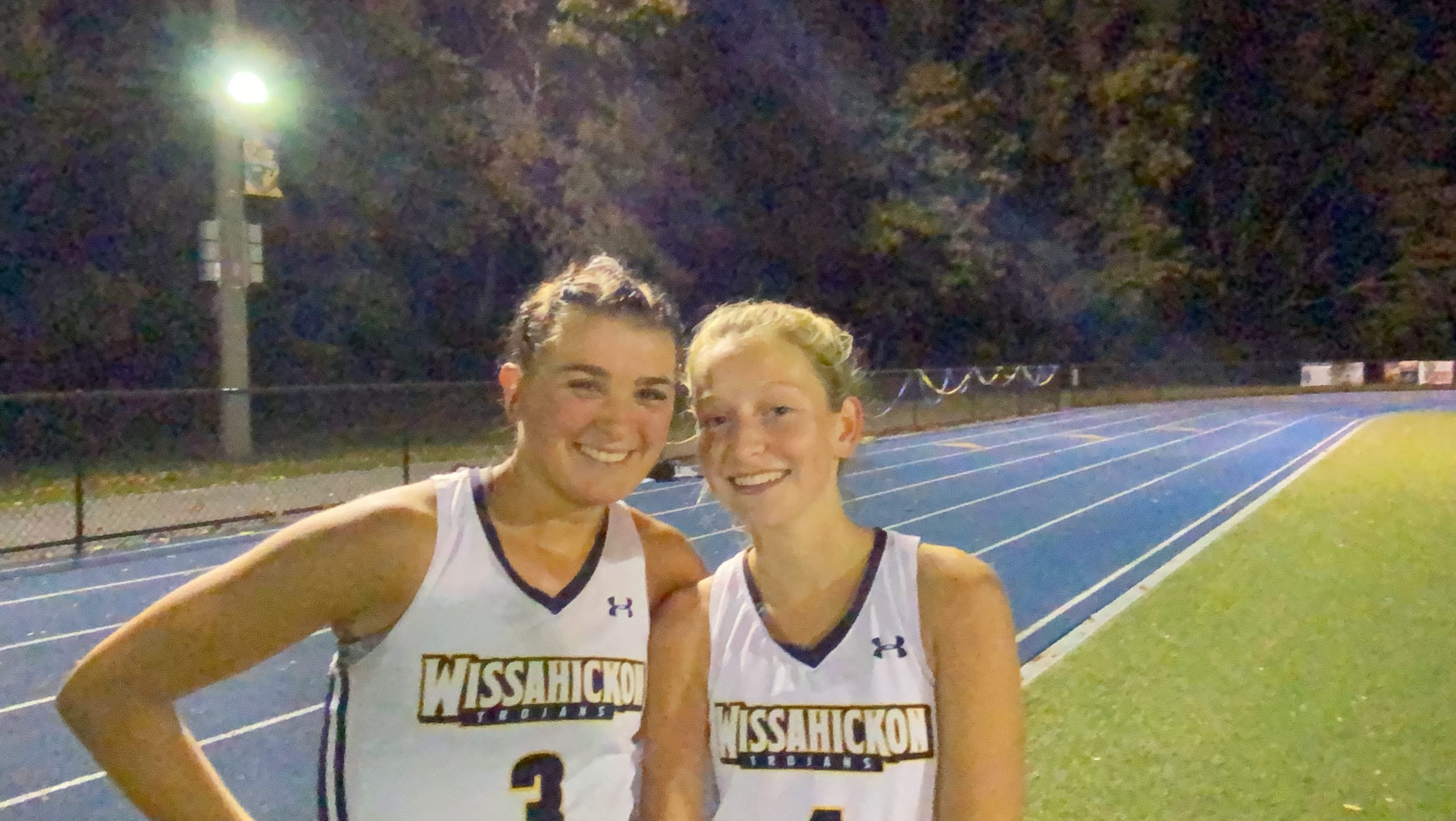 LOWER GWYNEDD >> Brynne Miller was adamant that she and Julia Schools had to get this penalty corner play right.

And while it took until the final seconds of the fourth quarter Monday, the Wissahickon field hockey duo finally found success.

“That corner, we’ve tried so hard to get that every time,” Miller said. “For me and Julia to get Red, it worked really well and we were excited to get it at the buzzer so that was really exciting especially on our Senior Night.”

Taking the insertion pass from Ella Hummel at the top of the circle, Miller slotted a pass to Schools on her right with Schools quickly giving the ball back to Miller, who ripped a shot into the right corner of the cage with no time remaining, capping a night the Trojans claimed the Suburban One League Liberty Division title with a 3-0 victory over visiting Upper Dublin.

FIELD HOCKEY: 0:00 4Q @WissAthletics 3, @udhs_athletics 0. Brynne Miller scores her second of the night, this one on a corner off a Julia Schools assist. pic.twitter.com/geVrbCoMHt

Miller finished with two goals, scoring the opening tally with just 20.4 seconds remaining in the first half while freshman Riley Ball doubled the advantage at 6:47 in the fourth as the Trojans (16-1-0, 15-0-0 division) found enough ways to crack the Cardinals’ defense to earn a seventh consecutive win.

“They were just always right crashing in on us and we didn’t know how to get rid of the ball right away,” Miller said. “We’re used to dribbling and then passing and they were right on us every time. And they were really aggressive, pushed (Ball) down a couple of times but we got through that.”

Wissahickon began Monday five points ahead of second-place Plymouth Whitemarsh in the division standings with two games remaining. With the Colonials’ 2-0 loss at Abington earlier in the day, the Trojans secured the division crown before starting their contest with UD, winning their first SOL title since taking the American Conference in 2012.

“We used to win all the time, right and then I went away and we came back and I think we won that year,” Gil said. “But then everybody started being really afraid of PW and I’m like why, I didn’t know and then I saw them and of course we should be scared. But yeah there was like a switch almost and they’ve really dominated in the last few years.”

PW took the last seven American titles then won the SOL Liberty in 2020 but this season the Trojans snapped the Colonials’ 81-game conference/division win streak with a 4-0 win Sept. 22.

Wednesday, Wissahickon – fourth in the District 1-3A power rankings – can complete an unbeaten division run when it visits Plymouth Whitemarsh at 3:30 p.m. in the regular-season finale for both teams.

“I mean that game was exciting,” said Miller of the Trojans’ first meeting with PW. “Since my freshman year we’ve got defeated every time. We had a really strong player last year Aiden Drabick but this year I feel like we’re a lot more of a team. And they lost beneficial players but so do we but we were more of a team when we played them.”

FIELD HOCKEY: 20.4 2Q @WissAthletics 1, @udhs_athletics 0. Trojans finds the back of the cage late 1st half as Brynne Miller scores off an assist from Ella Hummel. pic.twitter.com/oXgkDnfsPE

Upper Dublin (7-8-0, 7-8-0), which has lost two straight and four of its last five, is home for its next two games – a division contest against Hatboro-Horsham 4 p.m. Wednesday then taking on Upper Merion in a nonleague matchup 3:30 p.m. Thursday. Upper Dublin is 10th in the District 1-2A rankings with 16 teams making the playoff field.

The Trojans carried the play for most of the first half Monday but were still knotted at zeroes with the Cardinals until Miller finally struck just before intermission.

“It seems like that’s a pattern for us almost,” Gil said. “I don’t know, I haven’t done the statistics, the amount of goals we’ve scored in the first quarter I bet are really low. So I don’t get upset anymore when we don’t score in the first quarter and we try to adjust and revamp and try to go out there a different team.

“So with Upper Dublin they were overloading one side completely and so our goal, our task was to get the ball to the other side and that’s what we tried to do. And we were better at it in the last couple of quarters.”

After chasing down a ball after Hummel drove it into the circle, Miller turned and let go a shot between two defenders that bounced through a crowd and into the cage at 40.5 seconds.

“It actually went off of their player so we were really thankful that it bumped over the goalie cause I kept trying to slam it down there,” Miller said. “And she was there and her players were always down but we got it there.”

FIELD HOCKEY: 6:47 4Q @WissAthletics 2, @udhs_athletics 0. Riley Ball knocks in a ball at the right point on a corner. Caroline Kirkpatrick with the assist. pic.twitter.com/NUkfn7ASq9

The Trojans extended their lead on their second corner of the fourth. From the top of the circle, Miller sent the ball to Caroline Kirkpatrick on the left side for a shot that hit the goalie’s pads but Ball was there at the right post to sweep in the rebound with 6:47 remaining.

“The ball kind of crossed in front of the net and just used my reverse to kind of tap it,” Ball said.

Miller picked up her second as she and Schools finally converted on the give-and-go on the second of back-to-back corners in the final seconds.

“I kept doing the same thing and I guess I didn’t position the ball in the right corner,” Miller said. “And that finally sneaked right past her to the right corner. So that was exciting.”