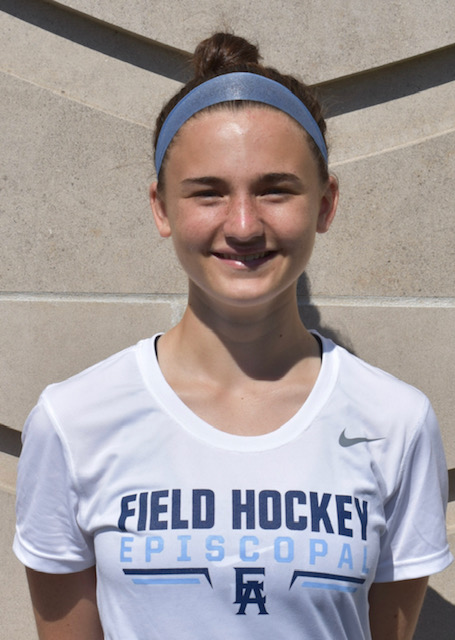 The sophomore goalie came up big in the final weeks of the season for the Episcopal Academy field hockey team, during an overtime win in the PAISAA state semifinals against Academy of Notre Dame, a 5-1 win vs. Agnes Irwin on EA/Agnes Irwin/Haverford School Weekend, and again in the championship finals of the PAISAA state tournament. EA head coach Gina Buggy said, “Gianna faced a powerful Hill attacking team with confidence and composure to help us secure the win.” Cilluffo finished the season with an .890 save percentage. A three-sport athlete at EA (field hockey, ice hockey, lacrosse), Cilluffo also participates in the Junto Club (debate), Scholium (school newspaper) and Young Democrats at EA.

Q: What is your sharpest memory of the PAISAA championship game against Hill? Is there one save that you made during the game that stands out in your memory – if so, can you describe how the play unfolded, and your role in it?

A: Honestly, all of the moments kind of blur together. I usually only remember saves when I make really good contact with the ball and have a strong clear. During the second half of the Hill game, we were almost constantly down a player and had corner after corner called against us, and without Kelly Smith in the midfield, we were all playing a little shaky. There was a lot going on, but the second one of the Hill girls wound up to shoot, everything froze. I don’t know if it was off a corner shot or not, but I can vividly remember saving this one shot off my kicker and the clear going perfectly up and out to the forwards. The second the ball was outside the circle, everything went back to being hectic, but I think one of the reasons we succeeded in that game was because we managed to stay so composed defensively.

Q: As a goalie, tell us a little about your role as leader of the defense, particularly as it relates to on-field communication with the defense. Can you give us an example of this leadership/communication paying off during the PAISAA tournament?

A: Communication is a key element of any team, but it really pays off during intense games. I always try to be talking with my defense and making sure everyone is marked up. During important games, however, tensions can run a little high on the field. I remember specifically that during one play of the Hill championship game, one of my defenders was almost in tears over a corner call against us. That’s when communication becomes something more than just logistics – at that moment it was more about calming the team down than ensuring we are all in position. This year we struggled a little bit with accepting the referee’s calls, and so I got into the habit and calling out, “We’re good!” after whistles were blown against us. Whether my teammates are listening to me or not is up to them, but I always try my best to keep everyone calm and focused on the next play ahead of us.

Q: Have you always played goalie? What sparked your original interest in the goalie position?

A: Yes, I’ve always played goalie. Before I started playing field hockey in 8th grade, however, I was a lacrosse goalie. My dad was an ice hockey goaltender through college so I grew up always wanting to play the position. One of my friends just came up to me one day and asked if I would be willing to step in net for my school’s field hockey team, and I said yes. Using my lacrosse experience, I took to goalkeeping pretty quickly, but I don’t think I could play field hockey in any other position.

Q: What do you think is the strongest aspect of your game as a goalie?

A: Something my mom is always impressed by is my ability to get up quickly after grounding. I think it comes from learning to skate while playing ice hockey and (constantly) falling down and having to get back up again. It’s a useful skill to have as a goalkeeper since often the rebounds are played after an initial save. I also think I’m pretty strong in the mental aspect of my game, and I can stay calm in high-pressure situations, like the breakaway I faced during our OT win against Notre Dame.

A: Ever since I started playing I’ve struggled with off-speed and bouncing shots. Generally speaking, I can make consistent saves with hard shots, but when balls are rolling or taking weird bounces, I can react too quickly and not time my motion correctly. Thankfully, I have access to a lot of great training options to improve my patience on these kinds of shots.

A: Game days always start with good eating and lots of water. At some point during the day, I usually have a cup of tea for a little caffeine boost, but I avoid any sugary or heavy meals. When it comes time for warm-ups, I put emphasis on stretching out my legs before I get in gear. Once I start taking shots, I focus in on making quality contact with the ball and keeping in mind the little things, like pushing through each save completely and watching the ball all the way until it’s cleared. I like to take some hits from the top of the circle, some flicks to my hands, and then some little taps to my feet to make sure I’m ready for any kind of shot. Usually right before game time, I jump around a little and shake my legs to get out any nerves.

Q: Who have been your biggest mentors as a goalie, and what was the most important thing you learned from each one?

A: Emily Snowden, my goalie coach, has taught me so much about goalkeeping it’s insane to think about. If you saw me in net two years ago you wouldn’t recognize me; Emily took me from a lacrosse goalie in field hockey pads to a consistent goalkeeper over the course of a season. Her dedication to coaching and understanding of the game are enviable. Emily has taught and refined my technique time and time again, but one of my favorite catchphrases of hers is, “Leave it better than you found it.” This can be applied to so many things, but it’s a mindset I always come back to while goalkeeping. It’s a call to always be improving not only yourself, but working to help those around you too.

Q: What is your favorite academic course at EA?

A: I really enjoy my English classes. This year I’m in World Literature. I love reading new texts and analyzing their meanings, but my favorite part of class is engaging in discussions about the works we read.