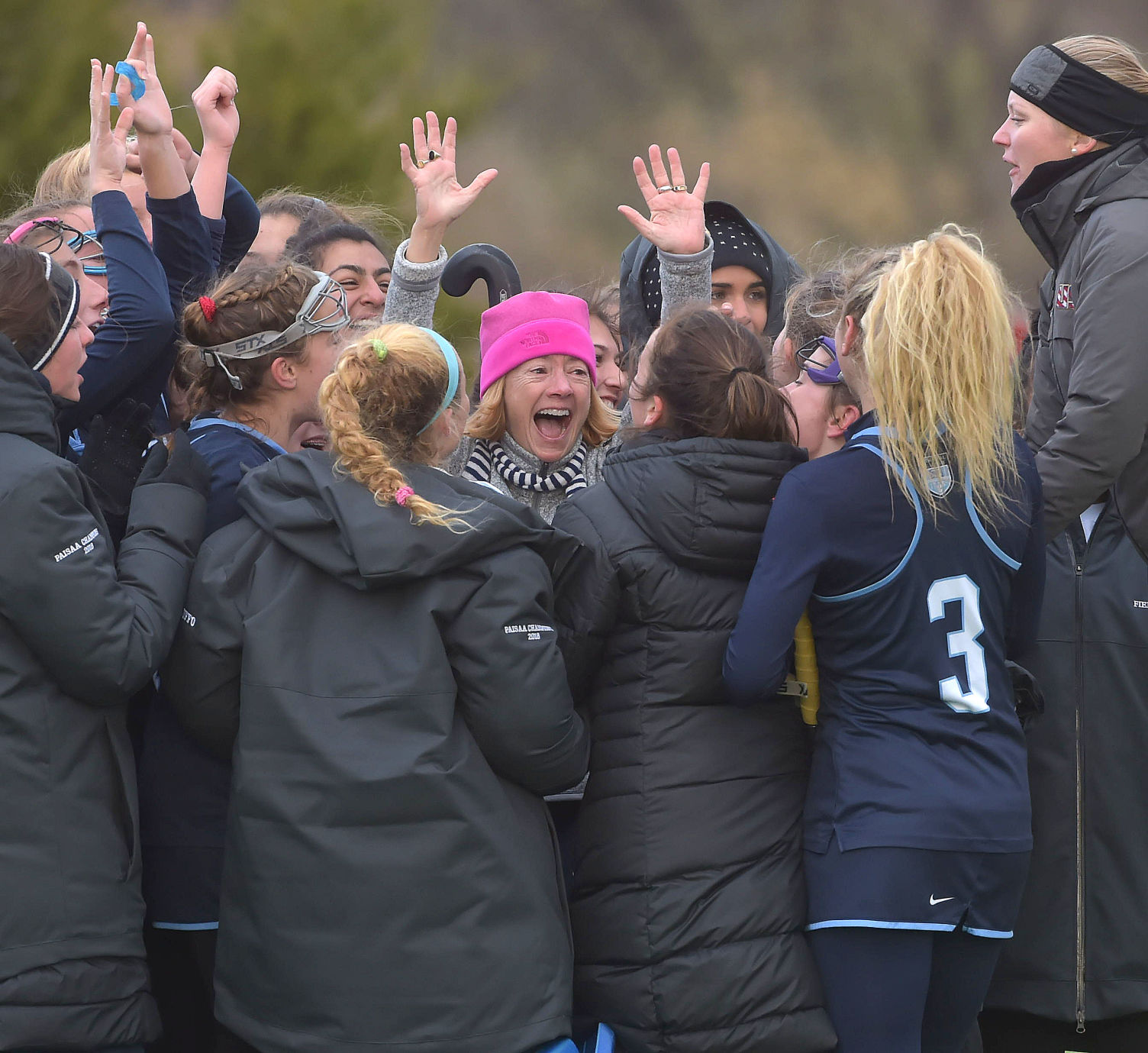 Episcopal field hockey coach Gina Buggy, in pink hat, and the Churchwomen players celebrate a 4-3 victory over the Hill School Tuesday to win the PAISAA Championship for the second year in a row. It was Buggy's last game as EA head coach. (Pete Bannan/MediaNews Group)

Sure, the Rams scored the first goal, had a pair of one-goal leads and put on immense pressure throughout the contest, especially in the final 15 minutes. They were EA’s equal, too, if not better at times. Yet it wasn’t enough.

Episcopal Academy was on a mission. The Churchwomen wanted to make sure that their coach, the legendary Gina Buggy, went out a winner.

Episcopal field hockey coach Gina Buggy, in pink hat, and the Churchwomen players celebrate a 4-3 victory over the Hill School Tuesday to win the PAISAA Championship for the second year in a row. It was Buggy’s last game as EA head coach.
(Pete Bannan/MediaNews Group)

Buggy quietly announced last month that she is retiring at the end of the school year after 34 years in charge of the field hockey program and 28 as the athletic director. Thus, this was her last game. On top of that, it was Buggy’s birthday. Talk about motivation.

That mandated, Ashley Sessa and Jackie Miller scored two goals each and the Churchwomen withstood the late surge from the Rams to win their second straight PAISAA title and fourth in six years, and send Buggy out a winner with a thrilling, 4-3 triumph on a cold and windy afternoon at The Proving Grounds.

“This is the greatest birthday present ever,” Buggy said to the team while holding the PAISAA championship plaque.

Miller scored twice in a span of 5:42 early in the second half to give the Churchwomen (20-1-1) a 4-2 lead, but it was Sessa’s first goal that swung the momentum in EA’s favor.

The Rams (18-3) were up, 1-0, on a tip-in goal by Alex Conway off a blast from Logan Clouser less than 10 minutes into the game and were dominating play. Sessa picked up a loose ball, weaved her way through the defense and fired a back-handed shot past goalie Hayley Gable for the equalizer a little over three minutes later.

“It always sucks to not score first because normally when teams score first it gives them a head start and the other team starts to feel sorry for themselves … but that is not our team,” said Sessa, who also had an assist. “Our team is very strong and that motivates us as a team to pick up the pace, get more energetic, on the sideline and on the field, get more aggressive and not dirty. That’s just how EA is.”

The Churchwomen took control of play for a while, but their resolve would be tested again, twice. First, junior Kelly Smith, characterized by Buggy as one of her strongest players, went off with a right ankle injury with 13:22 to go in the first half. Four minutes later, Josephine Palde scored off a corner to give the Rams a 2-1 lead.

A minute later, Sessa struck again, this time on a corner off a perfect feed from Garber with 8:16 left in the first half for a 2-2 deadlock, which is how the half would end.

As the second half was about to start, EA gathered as a team to a little talk.

“We knew it was going to be our last half of the season and we wanted to come out hard and leave everything on the field and that’s what we did,” Miller said.

She gave EA its first lead 1:16 into the second half off a pass from Sessa. Miller struck again 5:42 later off a great pass from Laura Null, who stole an errant pass, dribbled through the defense and found Miller to put the Churchwomen up, 4-2.

From there, it was a test of nerves and will. Hill’s Kennedy Cliggett tipped in a shot from Palde off a corner with 11:01 to go in the second half while Garber was serving a 10-minute yellow card.

“It was extremely frustrating knowing that I could be out there helping my team, but I have so much trust in them,” Garber said. “They held down the field while I was out. They did a great job.”

The Rams kept the heat on, but could not get the equalizer. Sessa ran out the final seconds to touch off a wild celebration, much of which was centered around Buggy, and rightfully so. She closed out her long and distinguished career with a record of 479-97-11, 13 Inter-Ac championships (nine outright, four shared) and another PAISAA title.

“I feel so blessed,” Buggy said. “It’s hard to imagine that I’ve been doing this for 34 years and I would be as thrilled about the way kids play as a team now as I did when I started all of those years ago. There’s nothing more rewarding than watching a group of individuals become a formidable team and a family, and that’s what they did.”