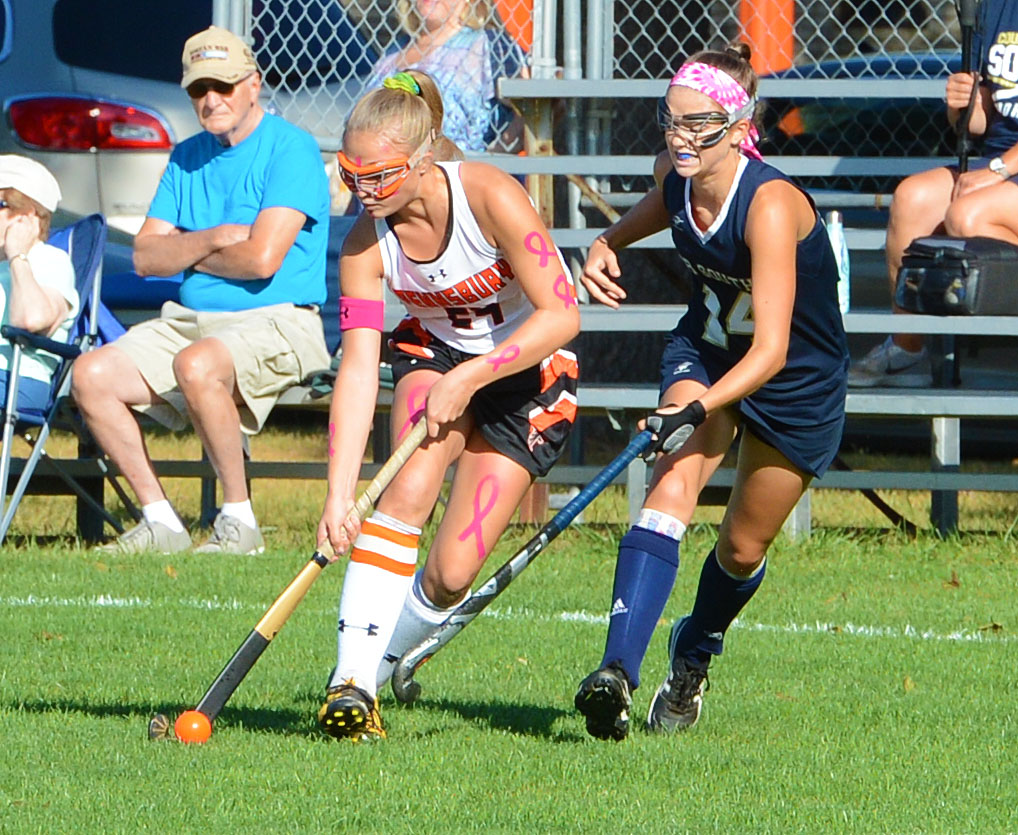 FALLS TWP. – One element that looms big in scholastic sports is experience. When you combine that with talent, you produce an almost unbeatable opponent. The Pennsbury field hockey team has proven to be just such a force, recording a 11-0 record in the highly competitive Suburban One League National Division.

Going into this season, Michelle Deodati, senior goalie for the Falcons, knew Pennsbury had the veteran manpower to succeed. Twelve of the 18 roster players held senior status. “Almost our entire team is seniors. My freshman year, there were 10 freshmen, including me. We lost a few and gained four or five the following year. Most of our team came from the same middle school so we’ve been playing together since seventh grade. We have a connection. We are so used to what each other does that it just works.”

The togetherness definitely produces the necessary team chemistry. “The key is our enthusiasm and compassion for one another. This year, what really helps is that we all are positive. For instance, before our recent Neshaminy game (Oct.6), we were all singing and cheering each other on. If we critique each other, we say ‘why don’t we try this.’ Even if we get a goal shot on us, everyone picks each other up.”

In Michelle’s estimation, the real bonding came in an early-season matchup at Souderton. “Our first game that showed we had it in us was the Souderton game (Sept. 11). We came out thinking we wouldn’t win and then we won in overtime. All last year, we would lose in overtime. We played Neshaminy the next day and knowing we had it in us helped push us forward. The positive attitude helped.”

Since then, Pennsbury has reeled off 11 straight league wins. In addition to defeating second-place Neshaminy twice, they have two wins over last year’s division winner Council Rock South. The Falcons’ most recent defeat of the Golden Hawks assured them a share of the SOL title. Two days later, they guaranteed themselves sole possession of the crown when they defeated Council Rock North, 3-0.

Michelle attributes momentum to the Falcons’ second match-up with CR South. “Our second game against Neshaminy was one of the best games we played against them. We were excited and pumped up. Our coach said, ‘you need to play every game like this one.’ We tried to do the same thing against South, knowing they were also a big rival. We had to come out really strong.”

The Falcons struck early and often. Nell Webber found the back of the opponents’ net with only three minutes off the game clock. Four minutes later, Samie Hackman tallied. Beverly Bozarth finished the first half, netting a goal at the 17:07 mark.

Michelle felt the scoring frenzy went according to plans. “We always say, ‘you need to get three goals in 10 minutes ladies.’ Just setting that goal really helped. We scored two goals very quickly.”

A final goal by Olivia Mauro with 7:30 gone in the second half iced the victory. The Falcons kept the big win in perspective. “None of us realized we were co-champs. Our coach said ‘you can’t celebrate yet.’ She said ‘anything can happen. You have to come back and win the next two games.’”

Michelle’s own experience tells her not to take any opponent lightly as Pennsbury still had CR North and Harry Truman left to play. “North was always a tough game that could go either way. We’ve beaten North and lost to North. Last time we played them, we were coming off our winning streak. We came into that first game feeling unstoppable so we played a real good game. They’ve always been a rival so they could come out and challenge us.”

Pennsbury was certainly equal to the challenge as they beat Council Rock North 3-0 Thursday afternoon (Oct. 12) to take the SOL National Division title. Nell Webber, Olivia Mauro and Maya Geller provided the offensive fireworks for the Falcons. This was Pennsbury’s first outright field hockey championship since 1992.

Michelle played her usual steady game in goal, a position she good naturedly says she earned by default. So far, Michelle has thrown eight shutouts at the Falcons’ opponents. “I tried out for the team in seventh grade. No one wanted to be goalie so I volunteered and here I am. I played catcher and figured I was getting softballs thrown at me. Getting field hockey balls thrown at me wasn’t really a change. I was fairly decent at it and felt it is an important position.

The Pennsbury coaching staff is undoubtedly pleased with Michelle’s decision. She provides another link to an experienced and talented team.