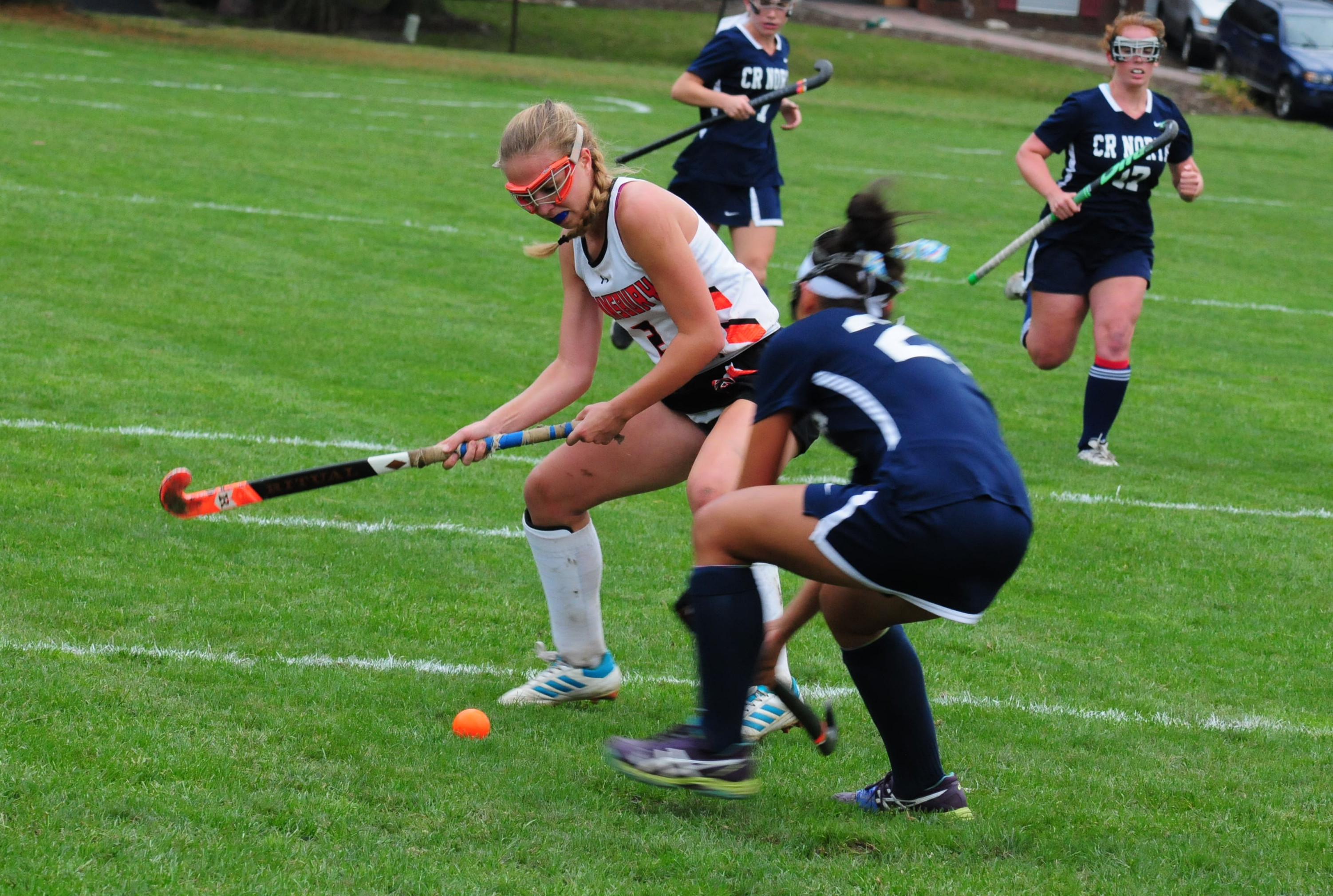 Pennsbury junior Samie Hackman controls the ball in the circle for the Falcons in 3-0 win over Council Rock North Oct. 12 on their home field.
(Steve Sherman – 21st-Century Media)

FALLS TWP. – Unbeaten Pennsbury got past league rival Council Rock North 3-0 Thursday afternoon on the Falcons’ home field, sealing the team’s first outright Suburban One National League title since 1992 and pushing the Orange and Black to 11-0 in the SONL.

“This is awesome; we’re all really excited,” said senior co-captain Kate Chesney. “For us seniors, this is our first year making it this far.”

The last time Pennsbury was at the top of the division was 2009, the year before head coach Jamie Parell took control and they shared the title with Rock North. Parell was a second-grader the last time the team claimed the league title for themselves in the ‘90s.

While the win over the visiting Lady Indians on Sept. 12 was the Falcons’ eighth shutout of the season, it did not come easy. Despite the fact they outshot the Rock 11-0 in the first half and Pennsbury was awarded nine penalty corners, the sides went into the intermission still scoreless.

The Falcons’ coach gives you some insight as to what was said during the break.

“We talked about finishing. The play was predominantly in their 25 so the opportunities were there; we just weren’t manufacturing the goals,” she said.

“We were dribbling too much in the circle and not relying on the unit.

“I reminded them that we weren’t undefeated by chance. I said, ‘if you want to let it slip away from your fingers in the next 30 minutes, continue playing the way you are.’”

After the break, Pennsbury took Parell’s words to heart.

Less than five minutes into the second half, senior Nell Webber took a feed from classmate Annie Price and poked it home from the right side for the winning tally. Two minutes later, junior Samie Hackman sent a ball across the crease that senior Olivia Mauro tipped into the cage.

“Nell is very good with her stick-work; she’s really good at passing,” said Chesney. “She definitely makes a lot of plays and gets it up there.

“Olivia – she’s good at finishing and stays on her posts. They’re both really good players to have out there.”

And for good measure, junior Maya Geller gathered in a pass about 10 yards outside the circle then slammed the ball home for a 3-0 Falcons’ lead with 7:01 remaining in the contest.

“After halftime, we knew we had to pick it up and play our game,” said Pennsbury senior co-captain Kate Chesney. “The second half, I think we really did come out strong and we played well.

“We knew we had to come out with more intensity in the second half so we just picked up our attitude.”

Last year, a season in which the Falcons finished 9-9-1 overall, 6-6 in the SOL National Conference, Pennsbury had trouble finding the back of the cage. That has not been the case this year.

The Orange & Black opened the season by scoring 14 goals in their first two league wins against Bensalem and Abington. The Falcons followed by adding eight more tallies in ensuing league wins over Neshaminy and CR South.

“I think it’s mainly our passing,” said Chesney. “This year, we really have our passing together so we have more opportunities to score and we’re just capitalizing on those.”

For senior goalkeeper Michelle Deodati, it’s her eighth shutout of the season and sixth clean sheet in her last nine games.

“We’ve had a lot of shutouts this year,” said Chesney. “Michelle has been doing a great job along with our defense – they’re really good at keeping (the ball) out.”

With a dozen seniors on the team, Chesney says her class wants to make as much noise as it can before hanging up their cleats when the postseason comes to its dramatic conclusion.

“We knew we wanted to have a really good season,” said Chesney. “It’s our last year so we just wanted to finish off strong and do as well as we could.”

Now 13-3 overall and 11-0 in the conference, Pennsbury travels to Truman Tuesday and to Upper Dublin Wednesday before the start of the District 1-AAA Tournament set for Monday, Oct. 23.

The Falcons are ranked eighth in the D-1 Class AAA Power rankings, right behind No. 7 CB East and just ahead of No. 9 CB West. The District 1 seeding meeting is set for Oct. 19 at Upper Dublin.