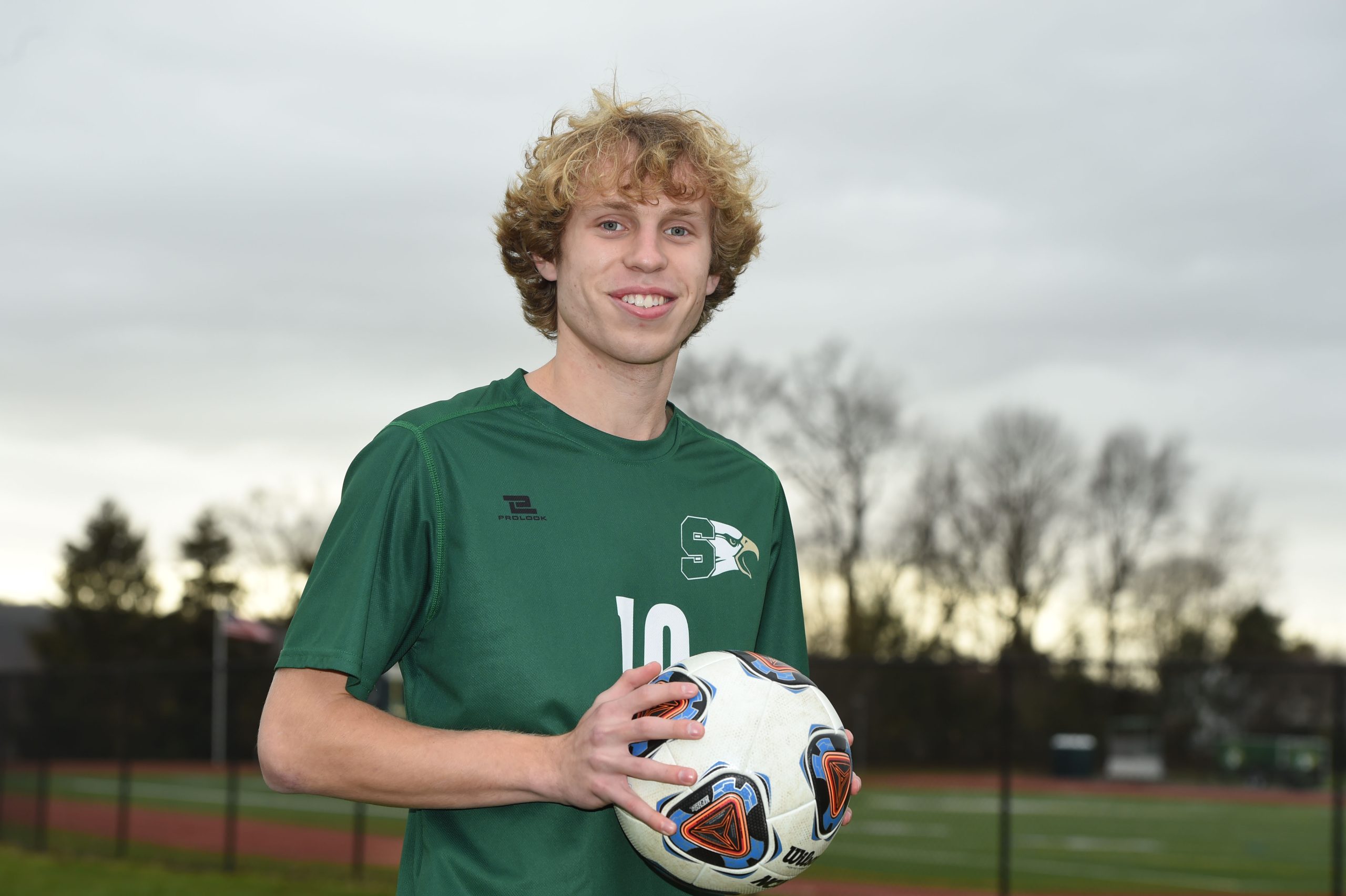 DOWNINGTOWN >> The Daily Local News Boys’ Soccer Player of the Year is much more than just a prodigious goal scorer.

Bishop Shanahan’s Zane Domsohn is a multi-faceted athlete, a three-sport star and – most importantly – a winner. His senior year has been filled with jaw-dropping accomplishments, both individually and as part of teams, and there is more to come.

“His athletic ability is second to none,” said head soccer coach Jim Kalavik. “The way that he moves on the field, the way he’s constantly in the right position, his determination and effort, we saw it when he came to us as a freshman. And then he constantly worked harder every year to get better.”

This fall, Domsohn was a dominant figure and guided Shanahan to the District 1 3A Soccer Championship, followed by a run to the state semifinals – the deepest in program history. And while he was doing that, Domsohn was also helping the Eagles football squad reach the same lofty heights with a district crown and a trip to the state semis.

“It was amazing to be a part of it with both of those teams,” Domsohn said.

The area’s most dangerous striker, Domsohn poured in 42 goals (and six assists) in 24 outings to lead Shanahan to a 19-5 record and postseason soccer glory. He shattered the school’s single-season record for goals before the end of October, and added 16 more goals for good measure.

“Regardless of what level, if you score 42 goals in a soccer season, it is more than an impressive number,” Kalavik said. “Goal scorers like Zane have a knack to be in the right position.”

As if that wasn’t enough, Domsohn simultaneously held down the kicking and punting duties for the Eagles on the gridiron in 2021.

“The kid never played football before, and in the state semifinal, he kicked three extra points and dropped two punts inside the five yard line,” Kalavik recalled.

During one of his final football practices, Domsohn left his new teammates and coaches with a lasting memory when he booted a 50-yard field goal. Not bad for somebody who had no plans to play football last summer.

“They needed a kicker and (head) coach (Paul) Meyers asked me to do it,” Domshn explained. “I wasn’t sure if I wanted to do it because I didn’t want it to affect my soccer season. But my mom (Trish) told me to give it a try. As the season continued, I started to really like it.

“Early on I was nervous, but at the end and we made our playoff run, I felt I was getting pretty good.”

And with little time to contemplate it all, Domsohn then threw himself into the basketball season, where he is the starting point guard for the Eagles.

“I’ve been around sports my whole life, so I am pretty confident I can play just about any sport,” he said.

The Domsohn name is sprinkled throughout the Shanahan soccer roster, so it’s easy to see why family is so important to Zane. For the last few seasons, his cousin Bryce was the Eagles’ starting goaltender, and in 2021 his brother Zander was an impactful midfielder despite only being a sophomore. Older cousin Gavin played and graduated from Shanahan in 2020.

According to Kalavik, the Domsohn cousins are more like brothers. And it only makes sense because not only have they been playing soccer together for years, they live in adjacent homes in Downingtown. Obviously, Zane’s father Dave, and his uncle Matt are very close.

“I am so grateful I can share my experiences with my brother and my cousins,” Zane said. “The bond we have is really strong.”

Dave Domsohn is the all-time leading goal scorer at Coatesville High School (over 100 goals) and went on to play college soccer at Bucknell. Zane’s 69 is the most ever at Shanahan, but it would have been much more if not for an abridged season in 2020 due to the coronavirus.

“My dad has a binder of all of his newspaper articles when he was in high school,” Zane said. “It just motivates me to become like him and do things that he did. He’s been teaching me about the game since I was very young.”

Domsohn’s scoring output this fall was the most in Chester County since former Conestoga (and current Drexel) star Chris Donovan notched 56 as a senior in 2017. In all, Domsohn registered nine three-goal outings in ’21, including all three goals in a big win over Radnor to win the district title.

“We were the team we were this year because of Zane Domsohn,” Kalavik said.

“But the team stuff is more important to me,” Zane pointed out. “If you ask me in a few years, I might change my mind, but you can have all the stats in the world, but for me it doesn’t mean anything if you’re not winning.

“If I scored three goals a game and we would lose, would not be happy. I would rather not score and win.”

He was a unanimous choice as the Ches-Mont National Player of the Year, as voted by league coaches.

“He has the understanding of how to make space for himself and the uncanny ability to find that spot to give himself an opportunity,” said Great Valley head coach Dave Moffett. “We had him in-check for 115 minutes and then gave him a chance and it was game over.”

Domsohn has drawn some serious interest from Division I soccer programs, but he’s yet to make a decision on a college. He has already visited Hofstra and is planning a visit to Coastal Carolina.